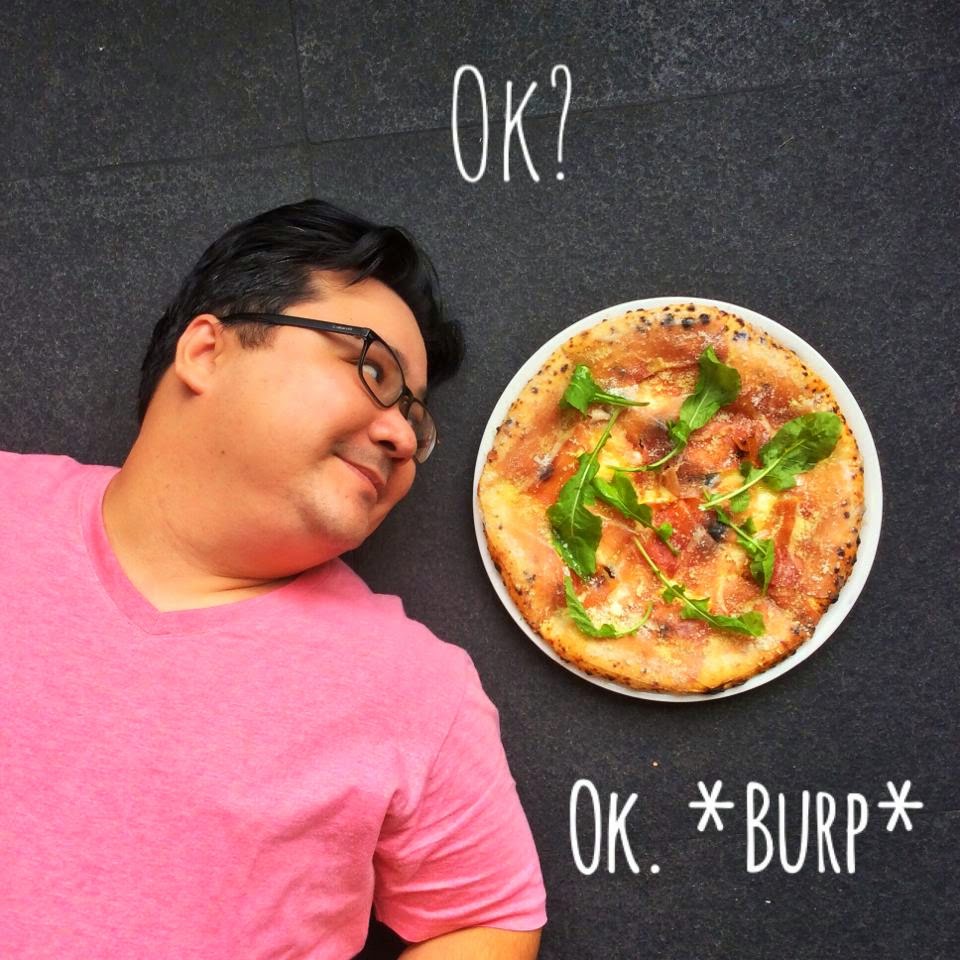 I am proud to say that I was able to check off experiencing Authentic New York Style Pizza from my bucket list during my visit to New York in 2012. Since then, we have tried numerous pizza specialist in the metro, all very good in their own right.
But there was one New York Style Pizza place in particular that opened its doors earlier this year, that I can safely say, was the closest to bringing me back to the Big Apple, and allowed me to relive my short fling with their world famous pizza... Motorino's Pizzeria Neopolitana.

Motorino's opened its first ever branch in Brooklyn, New York in 2008. Considering that its contemporaries have been around since the early 1900's, Motorino's may be the new kid in the block in the NY Pizza scene, but it didn't take long for them to establish themselves as the real deal, and expanding to branches overseas. 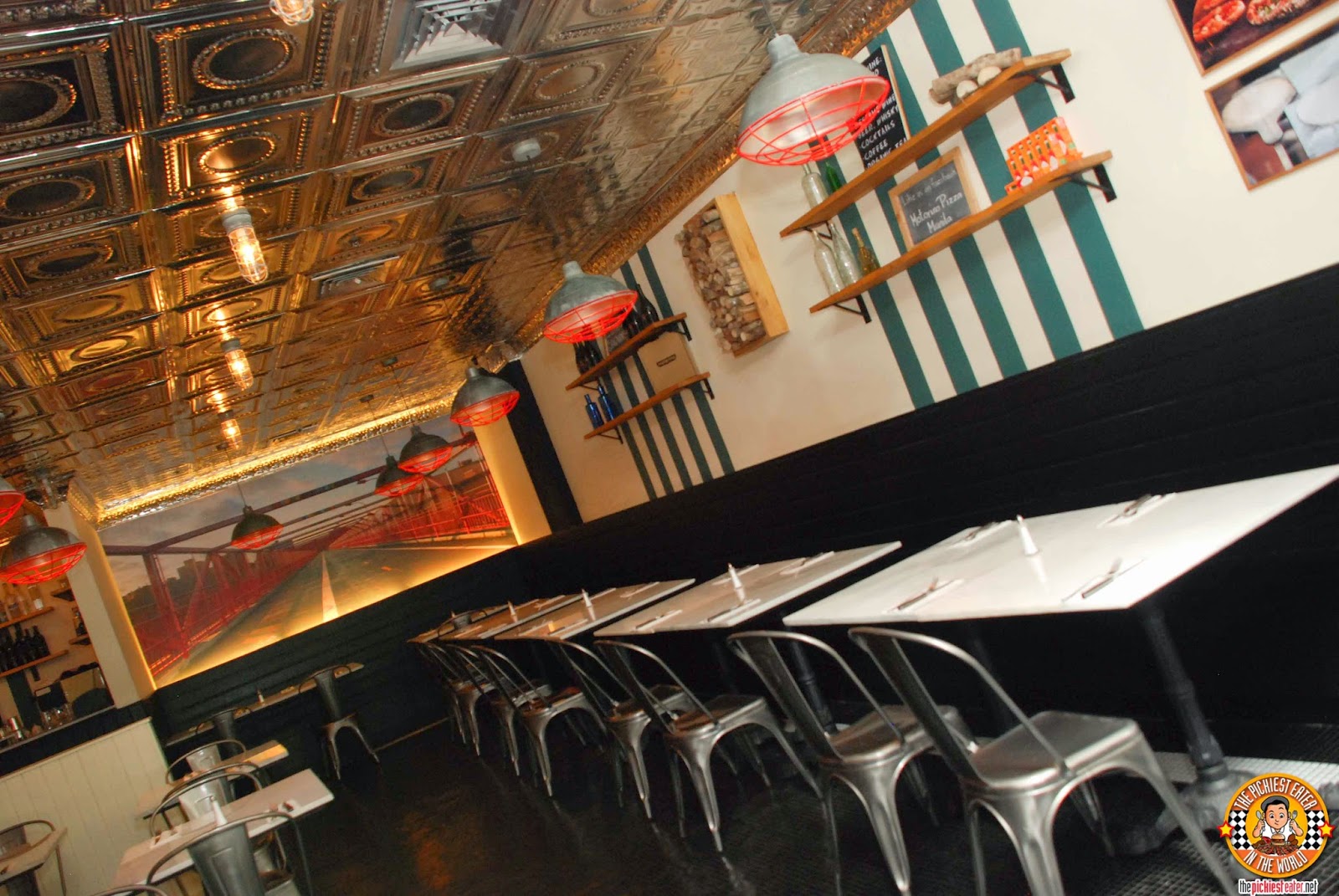 Having found a new home at Greenbelt 3, Motorino Pizza remains true to its New York roots, offering touches that will defintely remind you of the big apple, while still keeping things casual and chic. 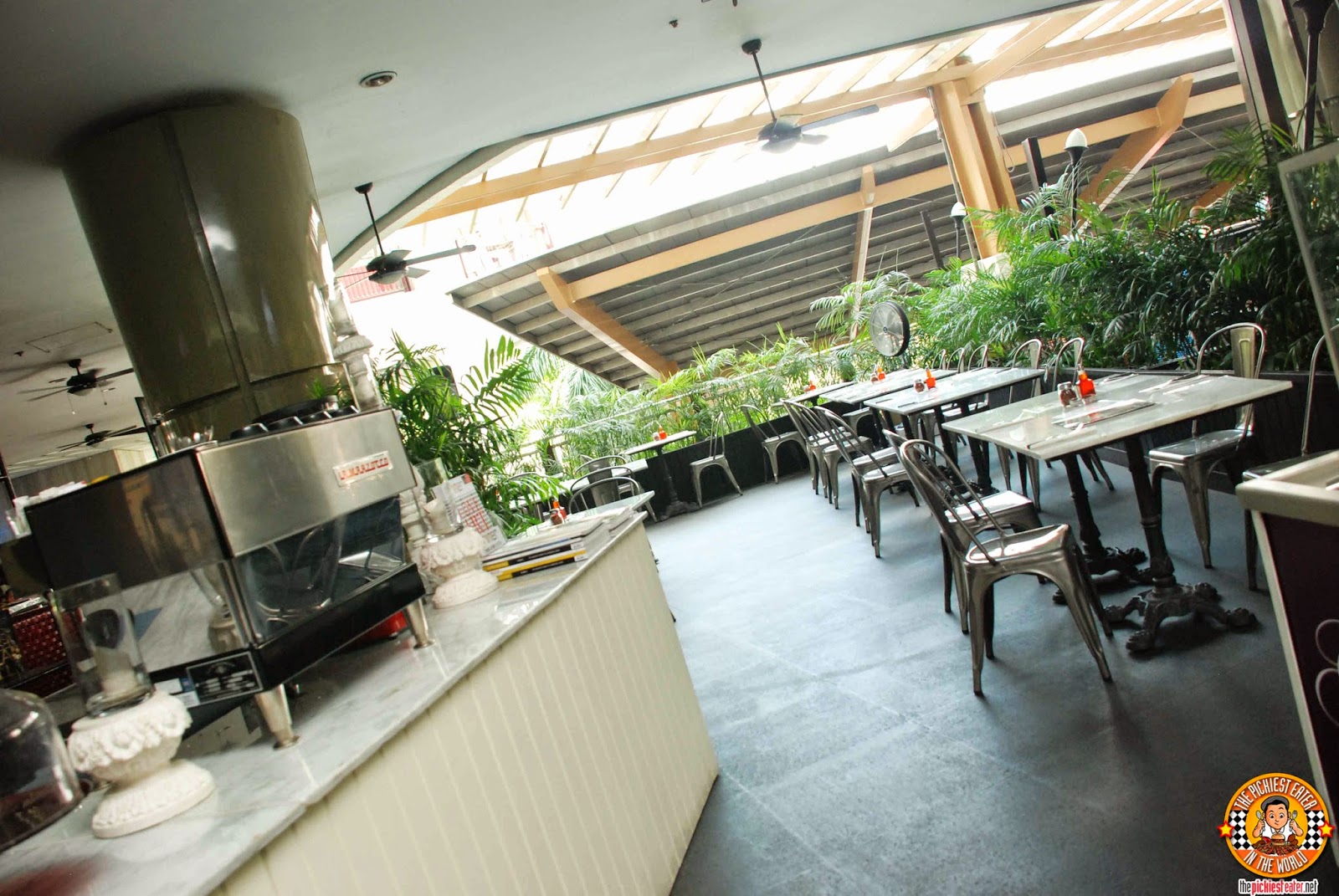 An Al Fresco area allows smokers to enjoy their wide array of dishes and specialty coffees, while basking in the outdoor breeze (Rainy season na kasi). 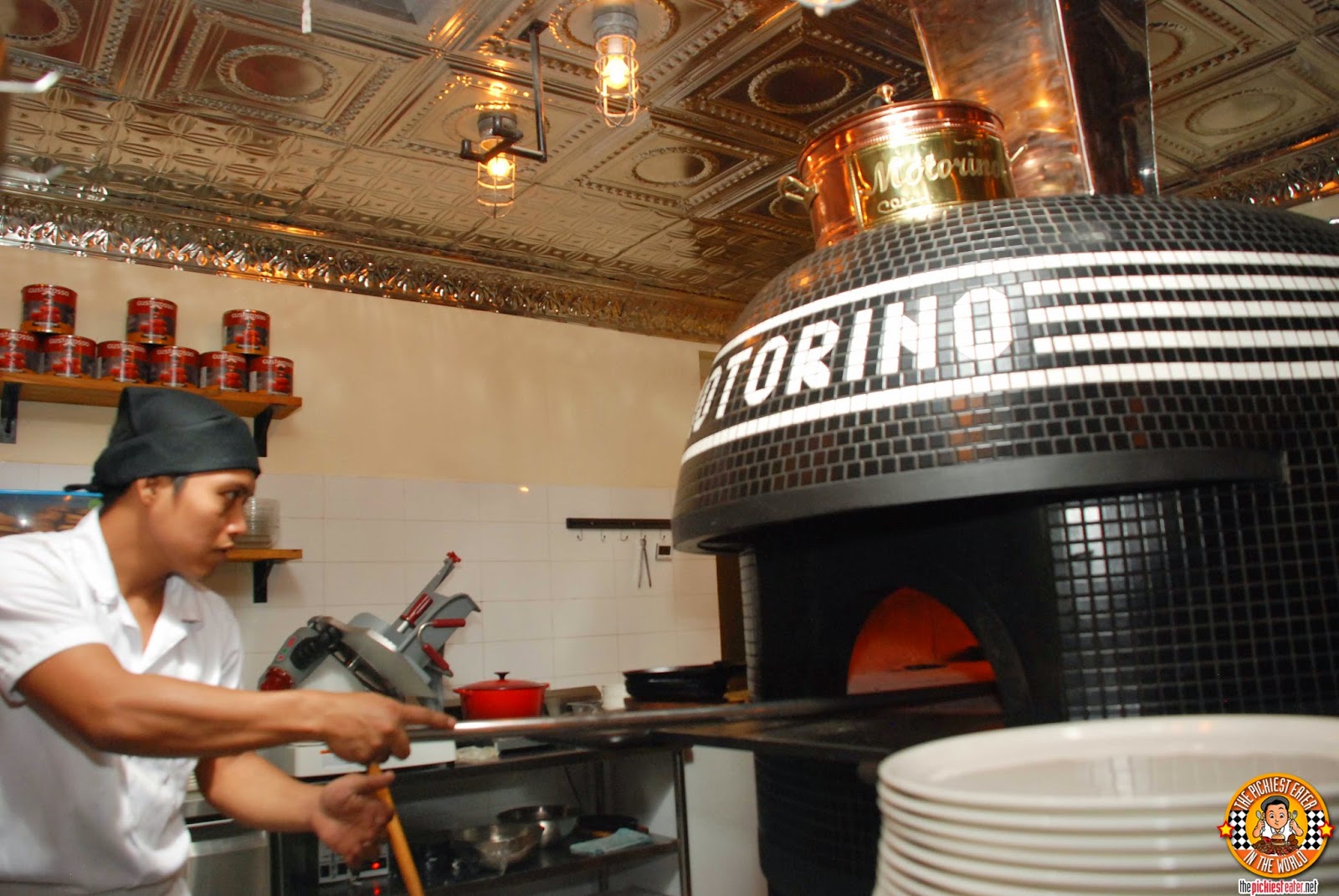 And just like Lombardi's in New York, the star of the Kitchen was the Brick Fire oven, which was custom-made for Motorino's first branch in Manila! 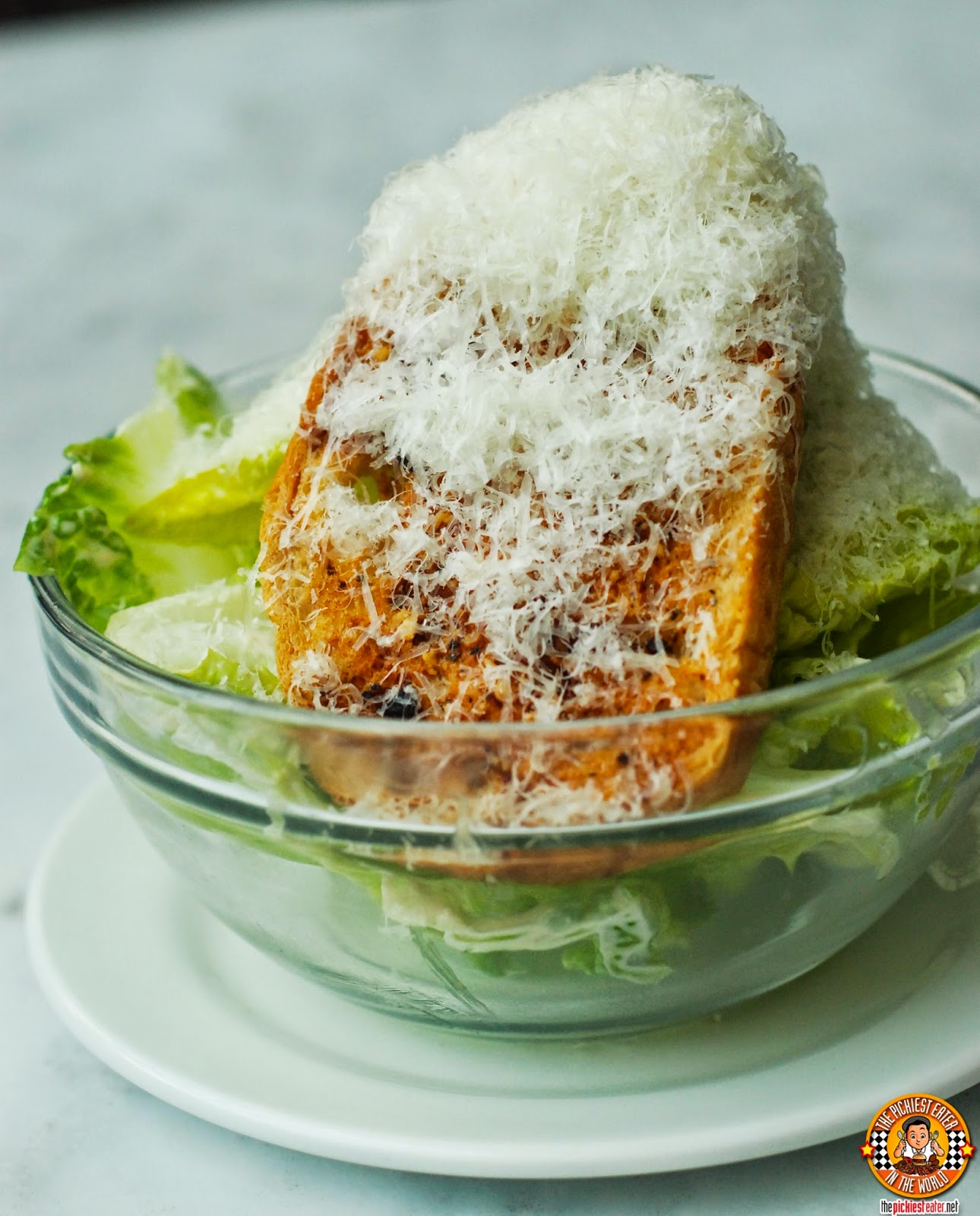 Much to the delight of my wife, our meal began with a Caesar Salad (P295). The salad bowl was filled with crisp leaves of lettuce, and drizzled with an anchovy dressing. Standing tall on the nest of lettuce like the Rock of Gibraltar is what the people at Motorino's calls a "Crouton", but looked more like a piece of Garlic Bread covered in shredded Pecorino Romano, for an added sharpness. 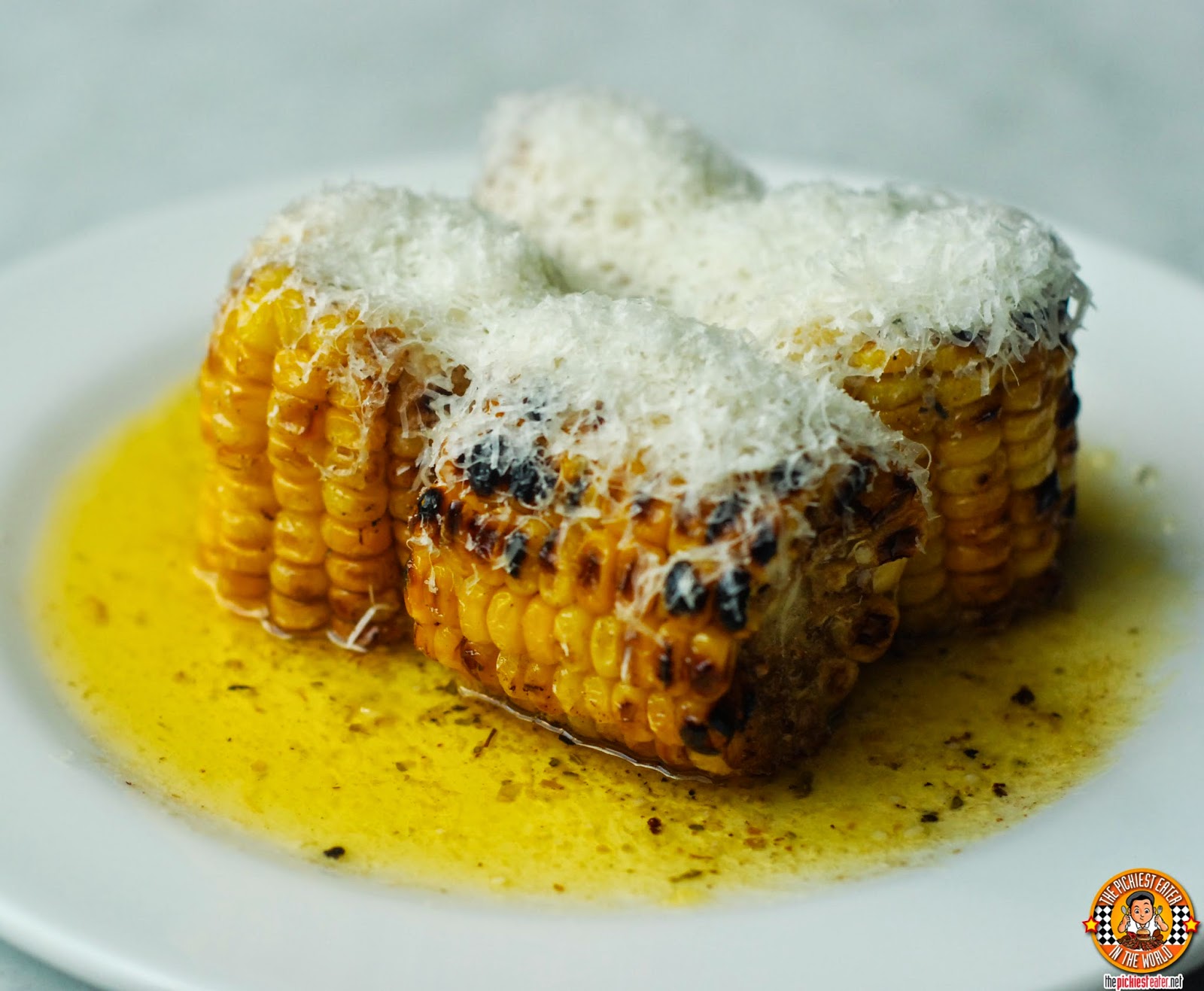 I don't know about you guys, but I like my corn with a nice smearing of butter. Well, Motorino's version of Roasted Corn (P95) has the corn drowning in oreganata butter, and topped off again with a bit of sharp Pecorino for a nice balance of flavor. Roasting the corn in the wood fire oven speckles the cob with blackened kernels, adding a touch of smokiness into the mix. 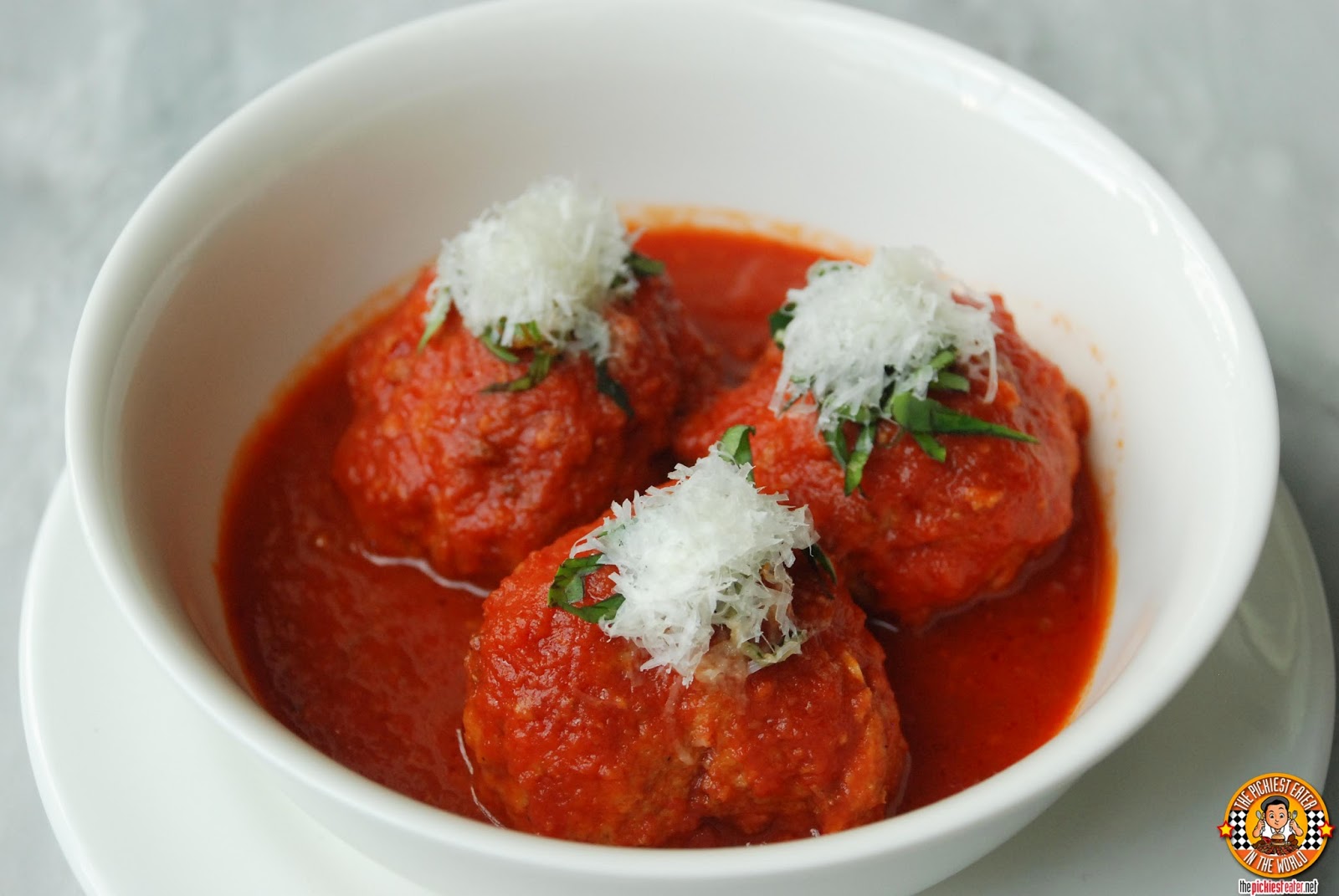 Despite it being coated in a pure red (meaning it would most likely be an enemy of my hyper acidity), I just had to try the Motorino Meatballs (P380). The Plump balls of pork were seasoned nicely, serving as a nice canvas to showcase the flavor of the tomato sauce. The balls were then sprinkled with a touch Pecorino and fresh basil. Very good, but the acid was a bit much for me to handle. 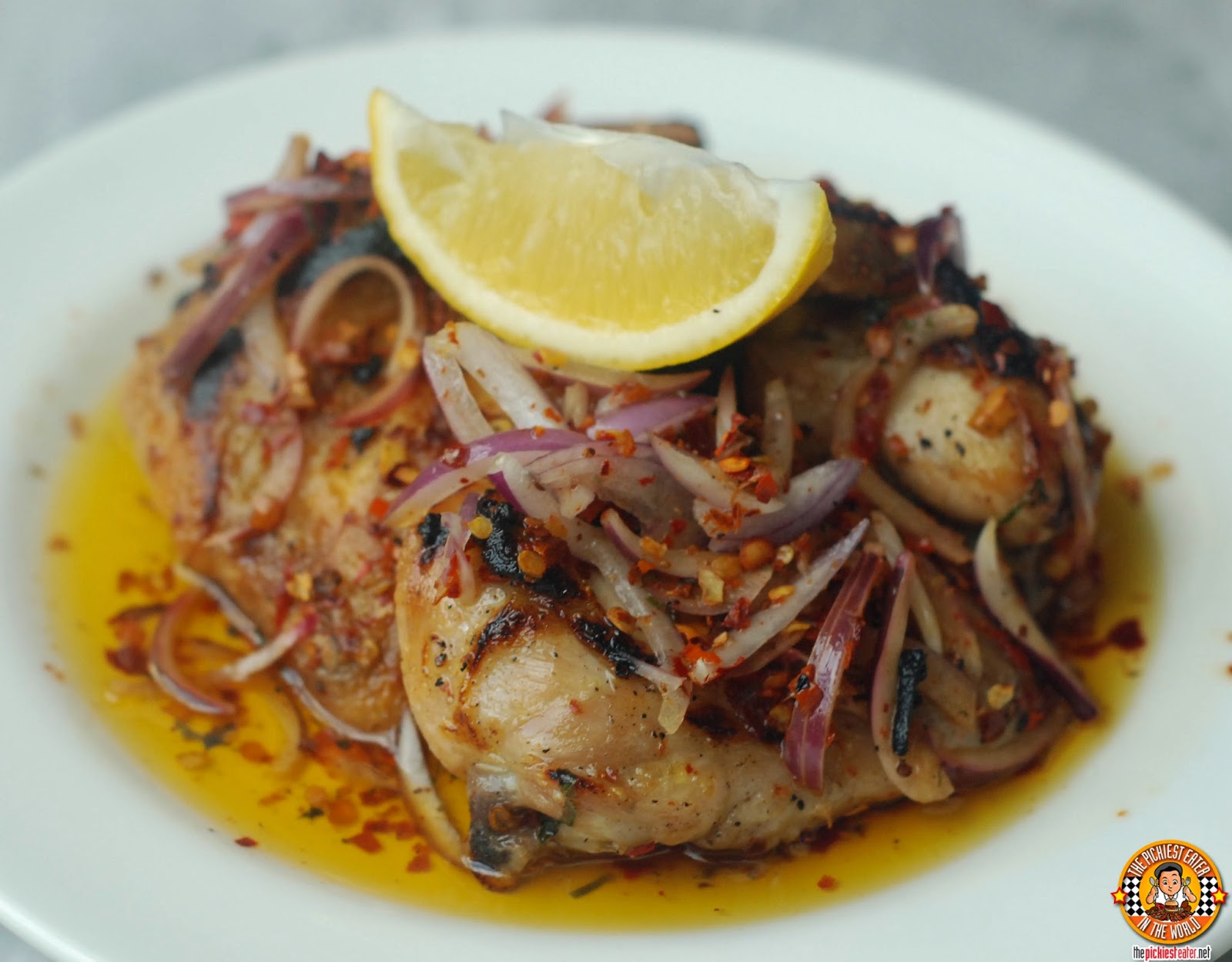 I wasn't expecting much from Motorino's Roasted Chicken Wings (P220), but little did I know, I would be in for quite a surprise. The oven roasted wings were swimming in some sort of "sauce", made with Extra Virgin Olive oil, a bit of lemon, a touch of mint, a sprinkling of chili flakes, before being topped off with sliced red onion.

This really will take your taste buds in for a roller coaster ride of flavors. The chicken has an innate smokiness courtesy of the oven, while the olive oil and lemon mixture coats the meat in a light citrus flavor, which is gently tempered by the mint. The Chili flakes then adds quite a bit of heat, then you get a nice crunch from the onions. 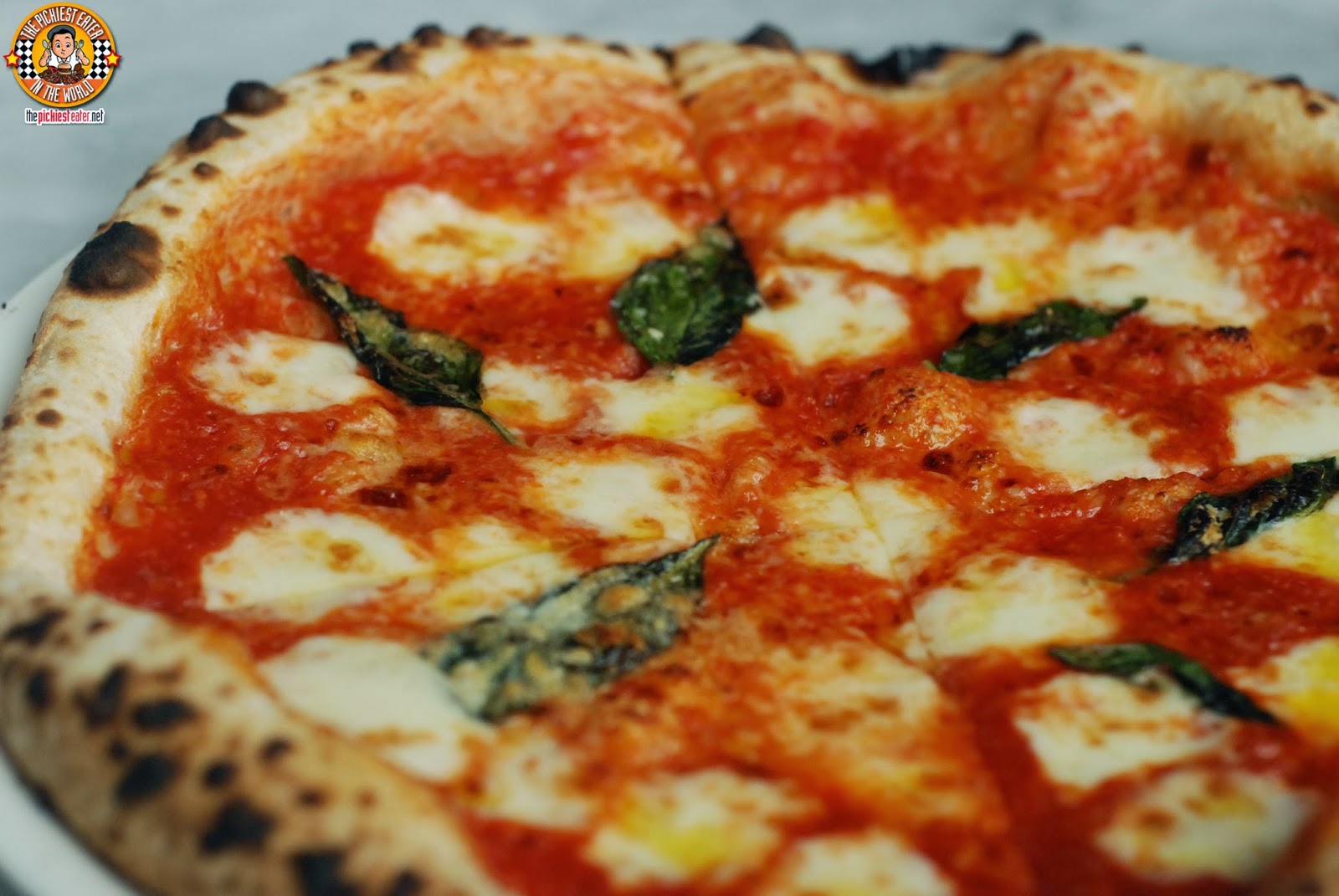 Motorino's pizzas is what put them on the map, and when they placed them all in front of me, you could really see why. All the pies had a rustic, hand crafted feel to it, with the edges peppered with dots of burnt dough.

Rina adored the restrained simplicity of the Margherita (P495). The pizza had a bold flavor of the tomato sauce, while the basil and drizzling of Extra Virgin Olive Oil gives it that distinct italian flavor. The Mozzarella cheese uses cows milk instead of Buffalo, which allows for a creamier flavor, while the Pecorino gives it a sharp boost.

A bit too strong on the tomato for my tummy to handle, but Rina really enjoyed it. 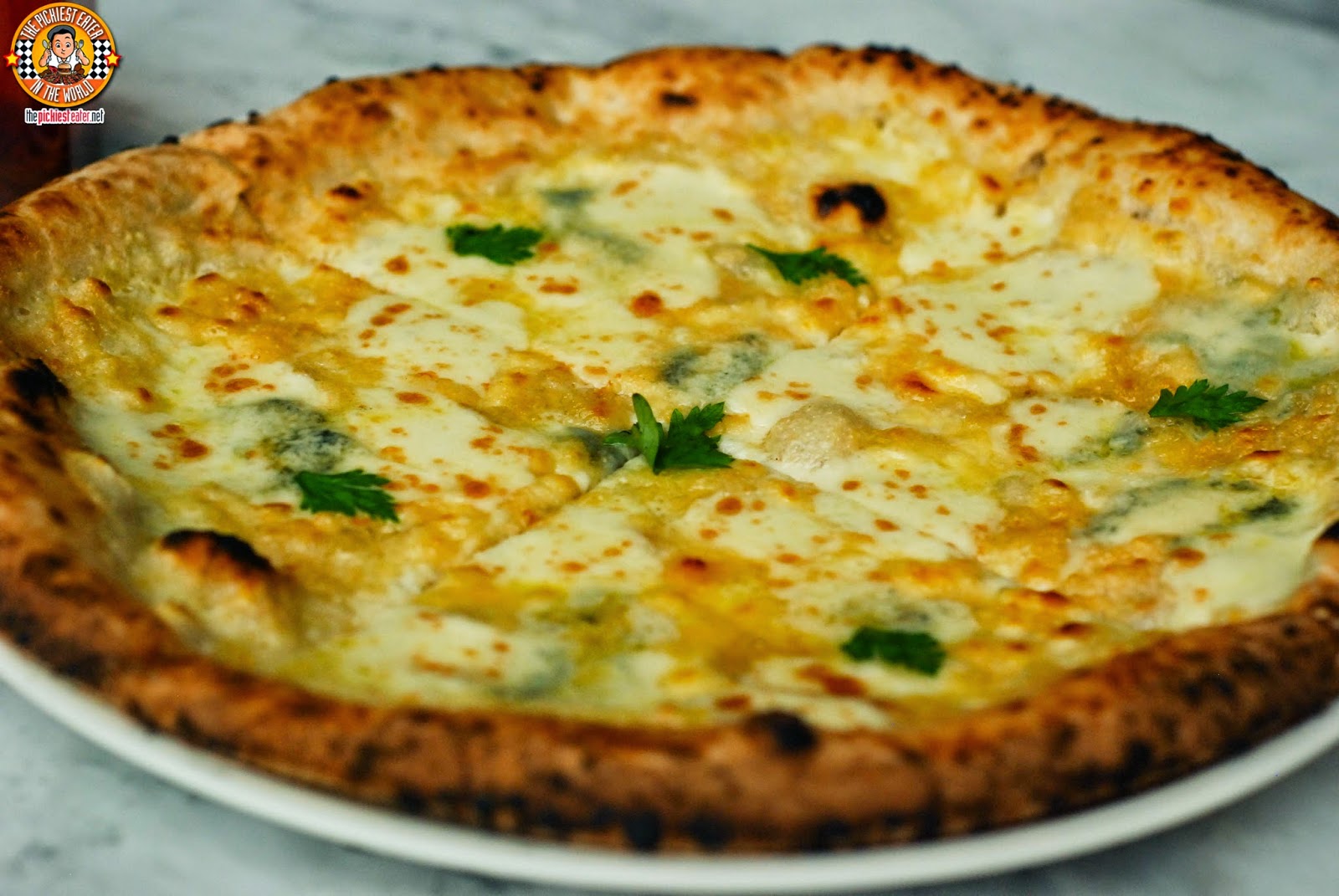 Though I regrettably had to skip the Margherita, I made up for it in heaps and bounds with the Aglio E Formaggio (P395). The pie eschews any trace of tomato, and instead uses a blend of Cheese and Olive Oil as its base.. And the results are heavenly. Mozzarella and Pecorino Romano are front and center of the pizzas' flavor profile, with a medley of herbs and spices finishing off an amazing Italian masterpiece that would make Da Vinci proud.

I really enjoyed this so much, It wasn't until the last bite that I realized that the pizza didn't have a single gram of meat on it. 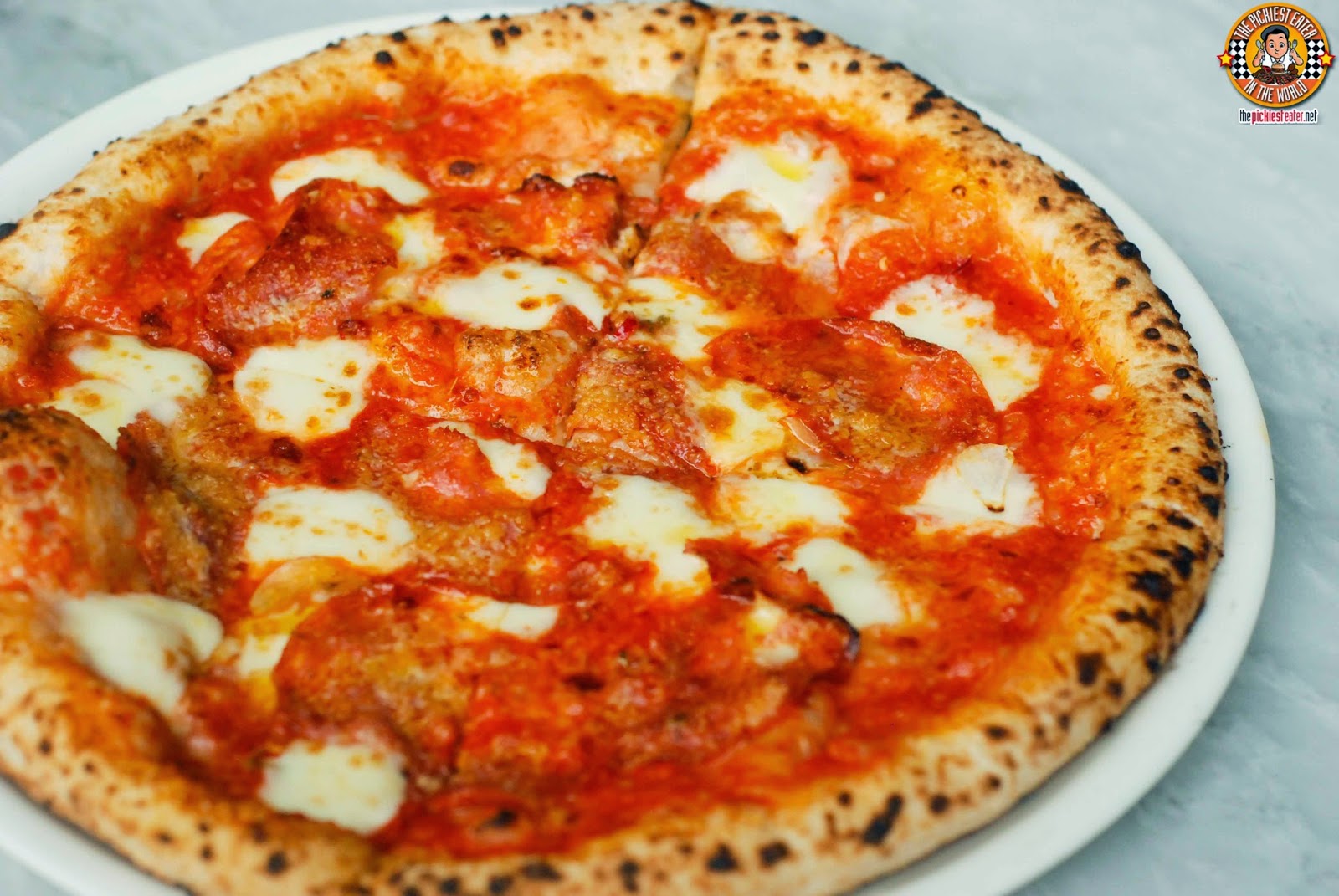 Which is probably why I was a bit more adventurous when it came to trying Motorino's Salame (P495). After having two meatless pizzas in front of me, I felt it was time to get some heavier protein in my body. I split a slice of the Salame with Rina, with the imported Salami the main decision for my "risk". Definitely a risk that paid off, because it was absolutely delicious.

You would be hard pressed to find a more flavorful salami anywhere else in the metro. The acid on the tomato sauce was slightly toned down a notch by the mozzarella and Pecorino cheeses. 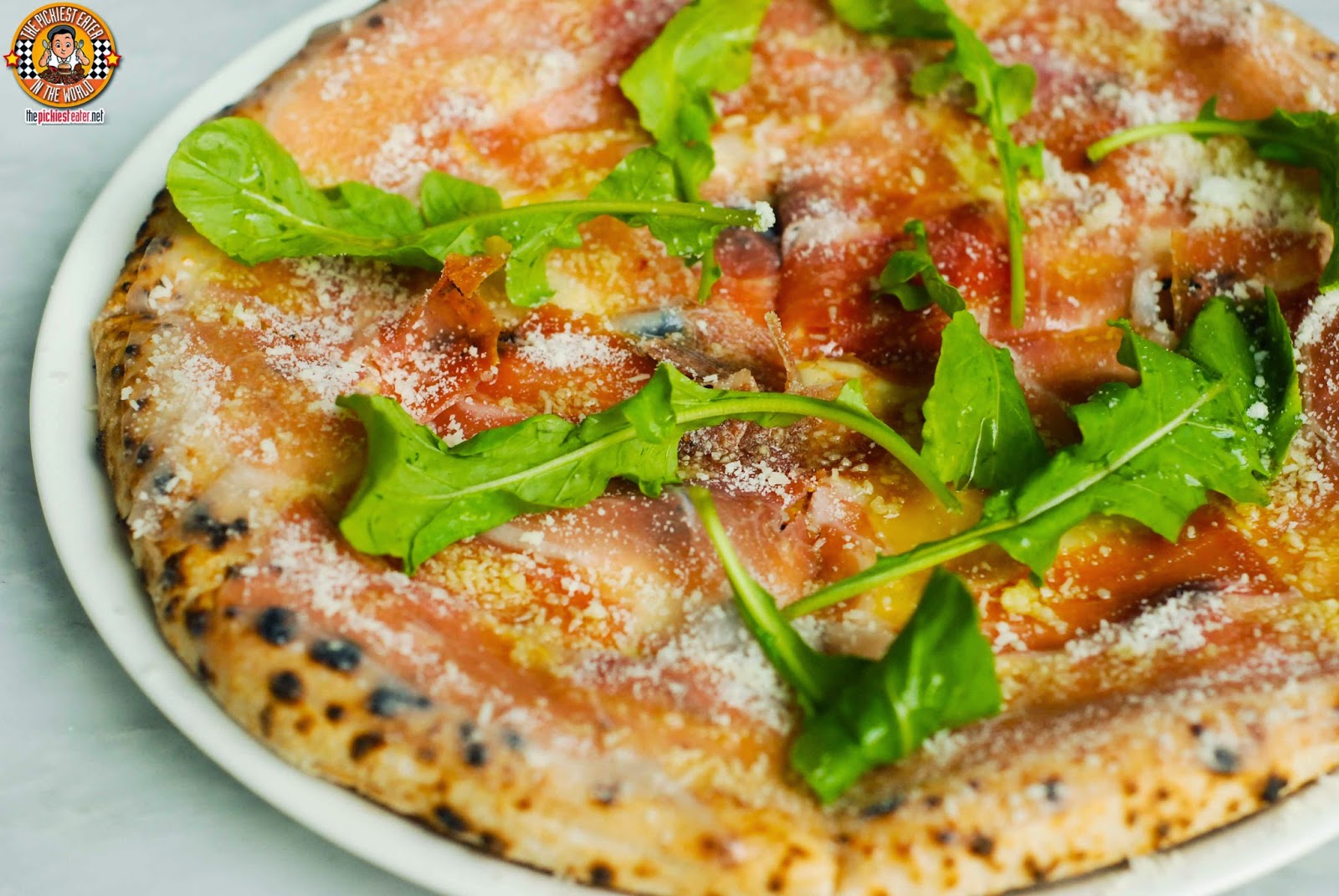 As much as I thoroughly enjoyed the Salame, I must say that the star of the menu (At least from what I tried) is by far the Prosciutto Di Parma (P585). Thin slices of robust Prosciutto are scattered around the pizza pie, with bits of Pecorino sprinkled on top, before being topped with fresh Arugula (I'm such a loving husband I gave my arugula to Rina).

This really hit all the right notes with me. The balance between the strong saltiness of the prosciutto and the cheese and herbs is done to perfection. The pizza itself is light enough so I don't feel too filled up, while keeping me craving for one slice after another.

Definitely a pizza worth going back for! 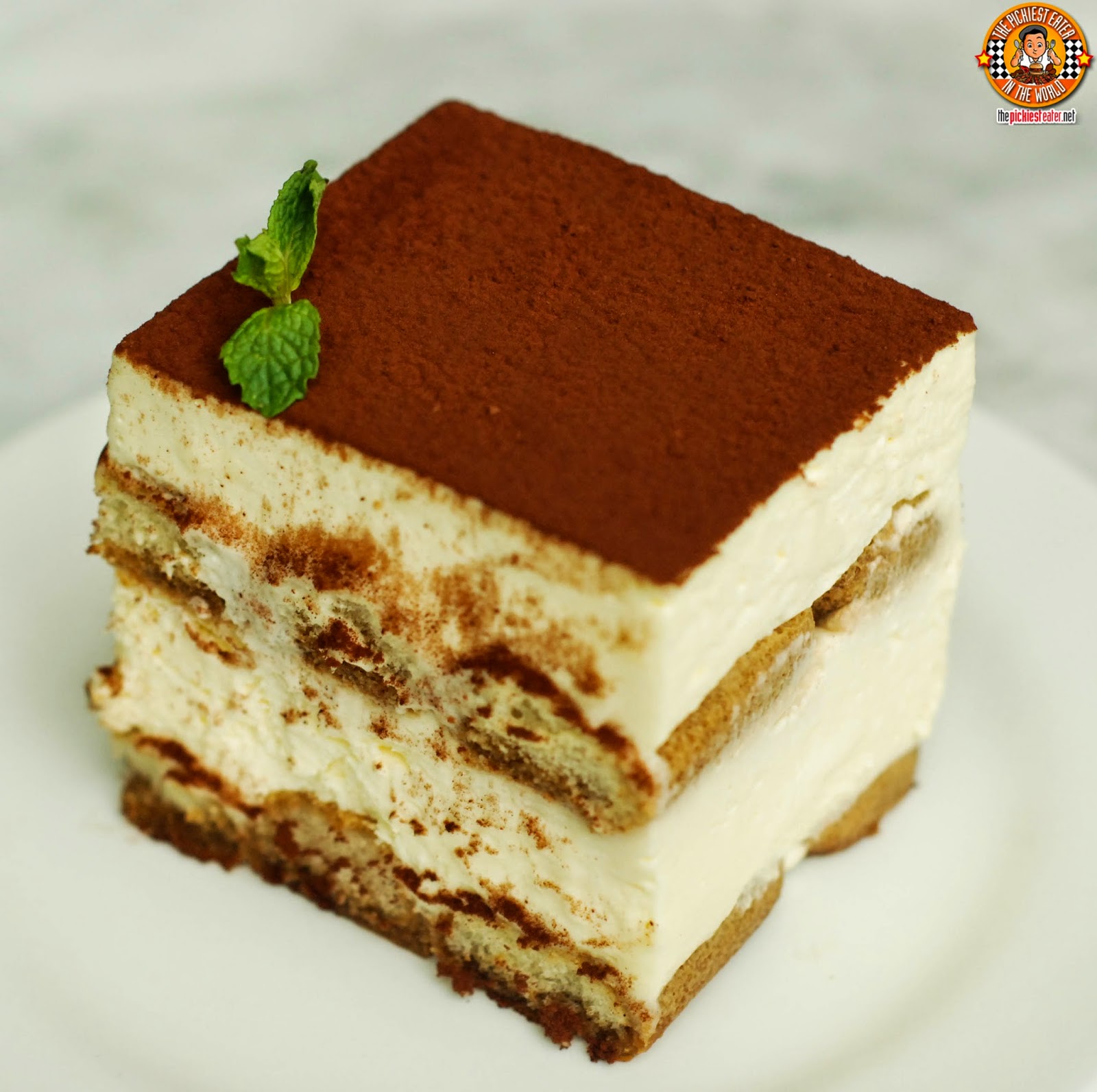 For dessert, we had the Italian end of the meal staple, Tiramisu (P250), which had a nice blend of rich marscapone and chocolate, and a gentle hint of coffee. 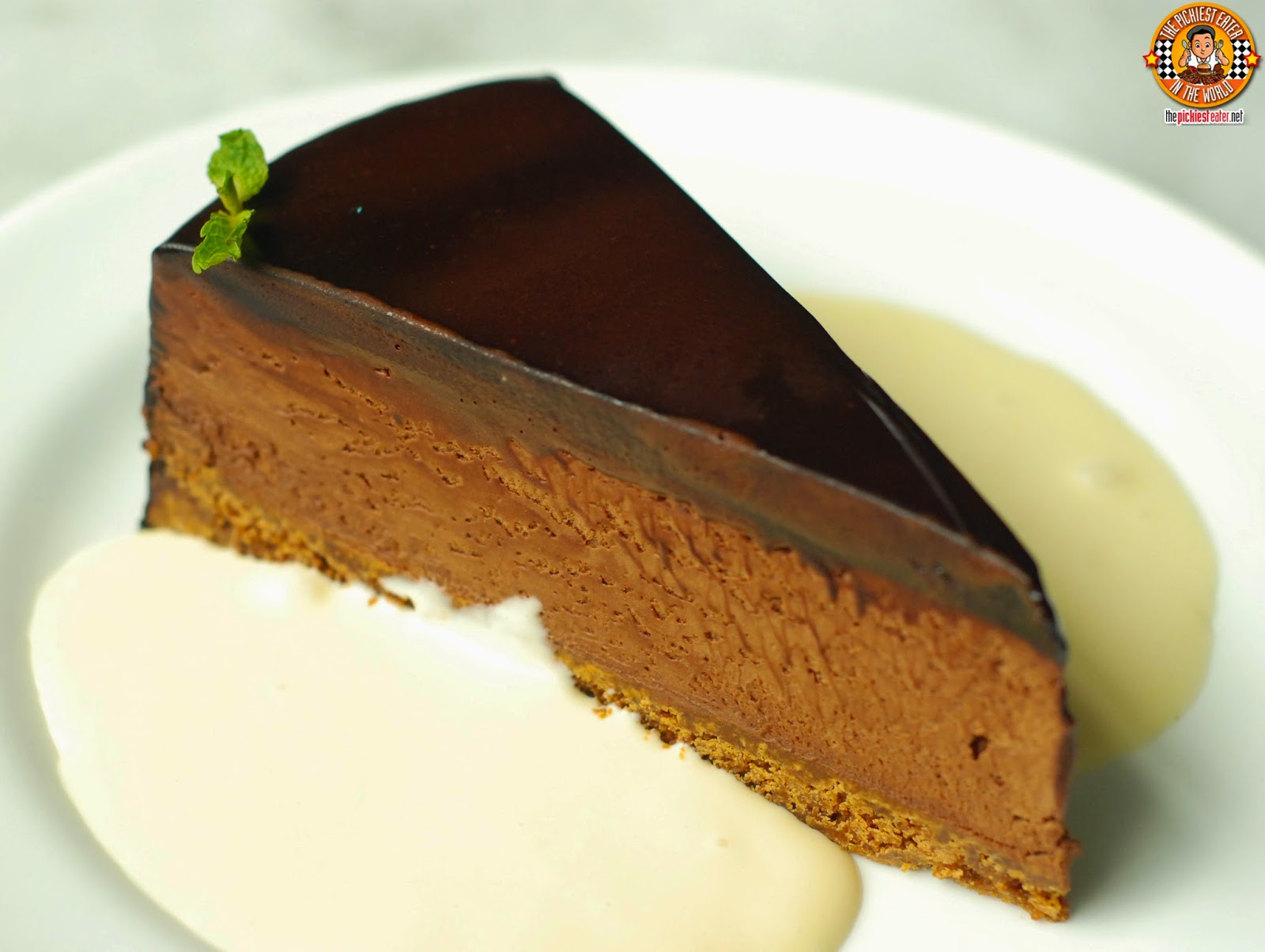 Rina nearly did a quadruple backflip when they placed the Torta Al Cioccolato (P250) in front of her. The silky chocolate pie had a dark chocolate top, which went well with the milkier chocolate center, and given a nice crunch by the graham crust.

Unlike some pizza places here, Motorino Pizzeria doesn't believe in piling up their pizzas with different toppings. Instead, they make sure that every quality ingredient they do use (which is often quite few), is packed with enough flavor, making you feel like it is "overloaded".

Motorino Pizzeria is truly a welcome addition to the growing pizza market in the country today!

Posted by The Pickiest Eater at 10:26 AM