COME TOGETHER: SALO AT THE FORT STRIP! 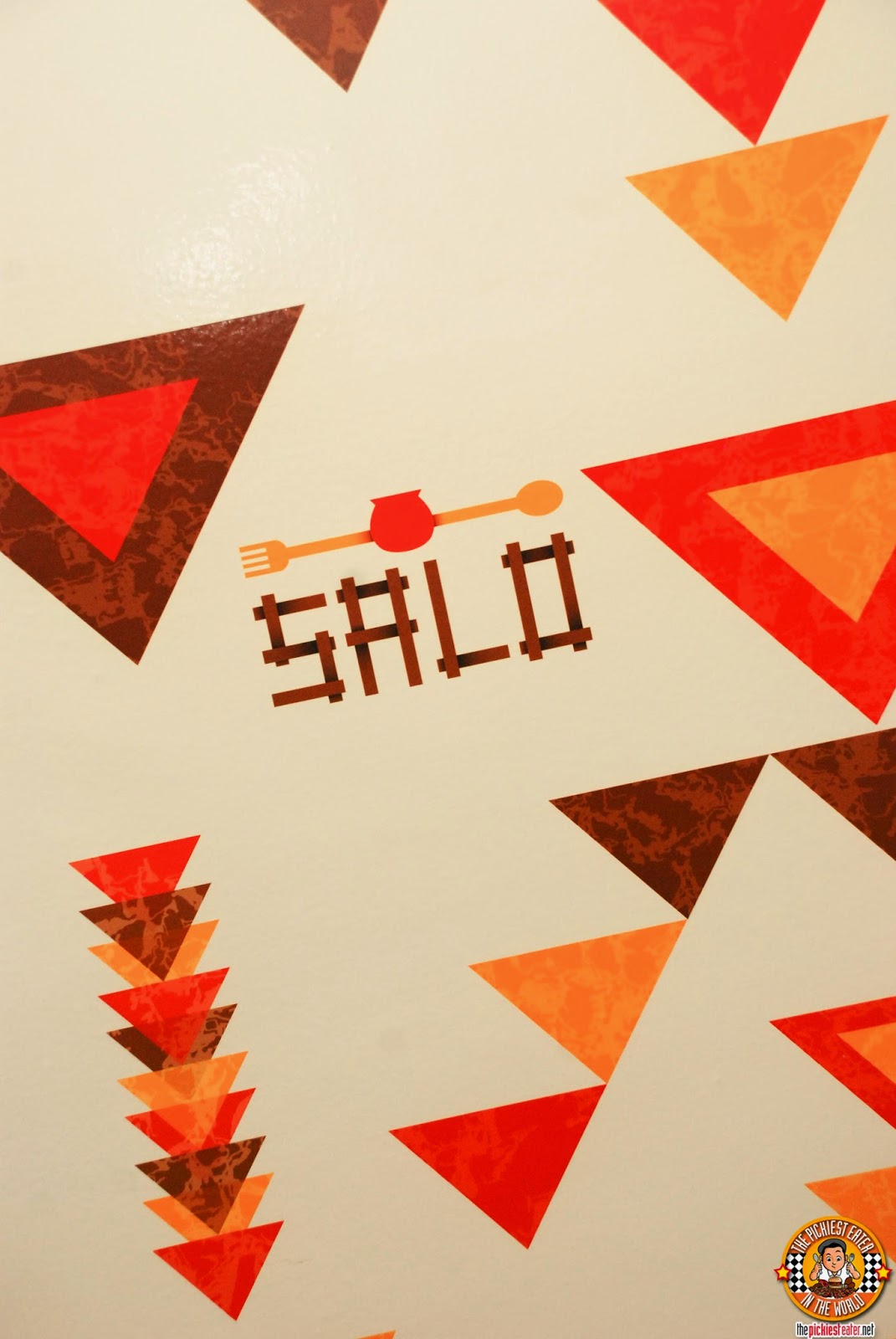 A couple of years ago, the sister company of the company I was then working for opened a new office at The Fort Strip. The office itself was quite stunning, and my friends from there were excited for the move. However, the common problem they all had was where to eat.

Don't get me wrong.. The Fort Strip has numerous choices to dine at, and most of them offer some very delicious fare. Early Bird Breakfast Club is one suggestion that comes to mind. Burger Avenue is another. Racks is also another good choice. I joked to my boss that I would like to apply for a transfer, with the restaurants nearby as the sole basis. But the problem is, as tasty as the choices undoubtedly are, you can imagine that eating in restaurants around The Fort Strip would eventually take its toll on one's wallet.

Thankfully, earlier this year, a new restaurant opened that not offers not only comforting Filipino classics at great prices. I was excited to check out what my friends had been raving about when I visited Salo! 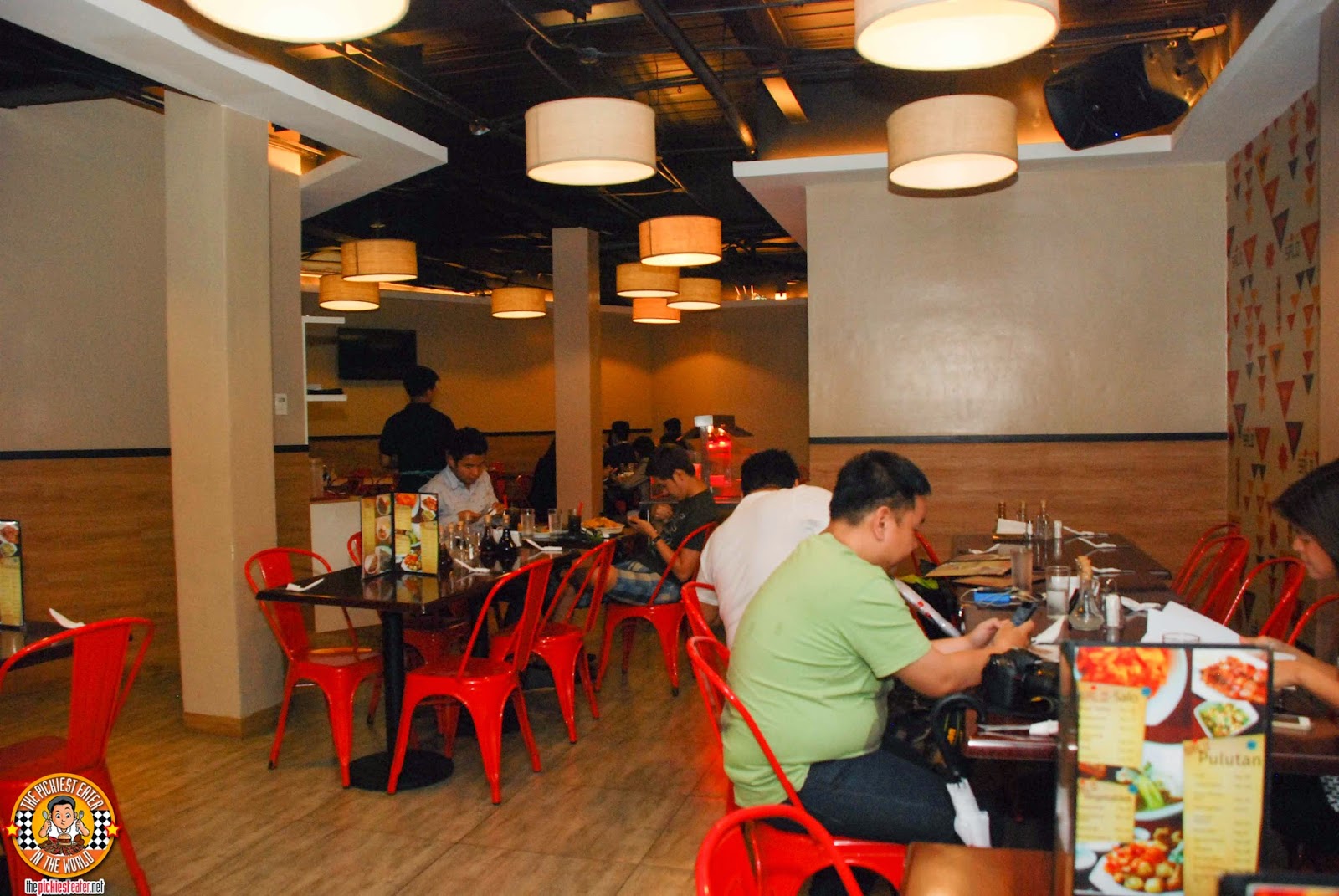 Salo is located at the exact spot at The Fort Strip that used to house Shawarma Guys. Though Sharwama Guys did have its own loyal following, the owners realized the high demand for a more budget friendly restaurant with dishes closer to home, that would be more appealing to the white collar workers within the area- not only for meals but for unwinding as well.

With the classic Filipino Menu that Chef Benjo Tuason and his crew  conceptualized, that is exactly what Salo does. 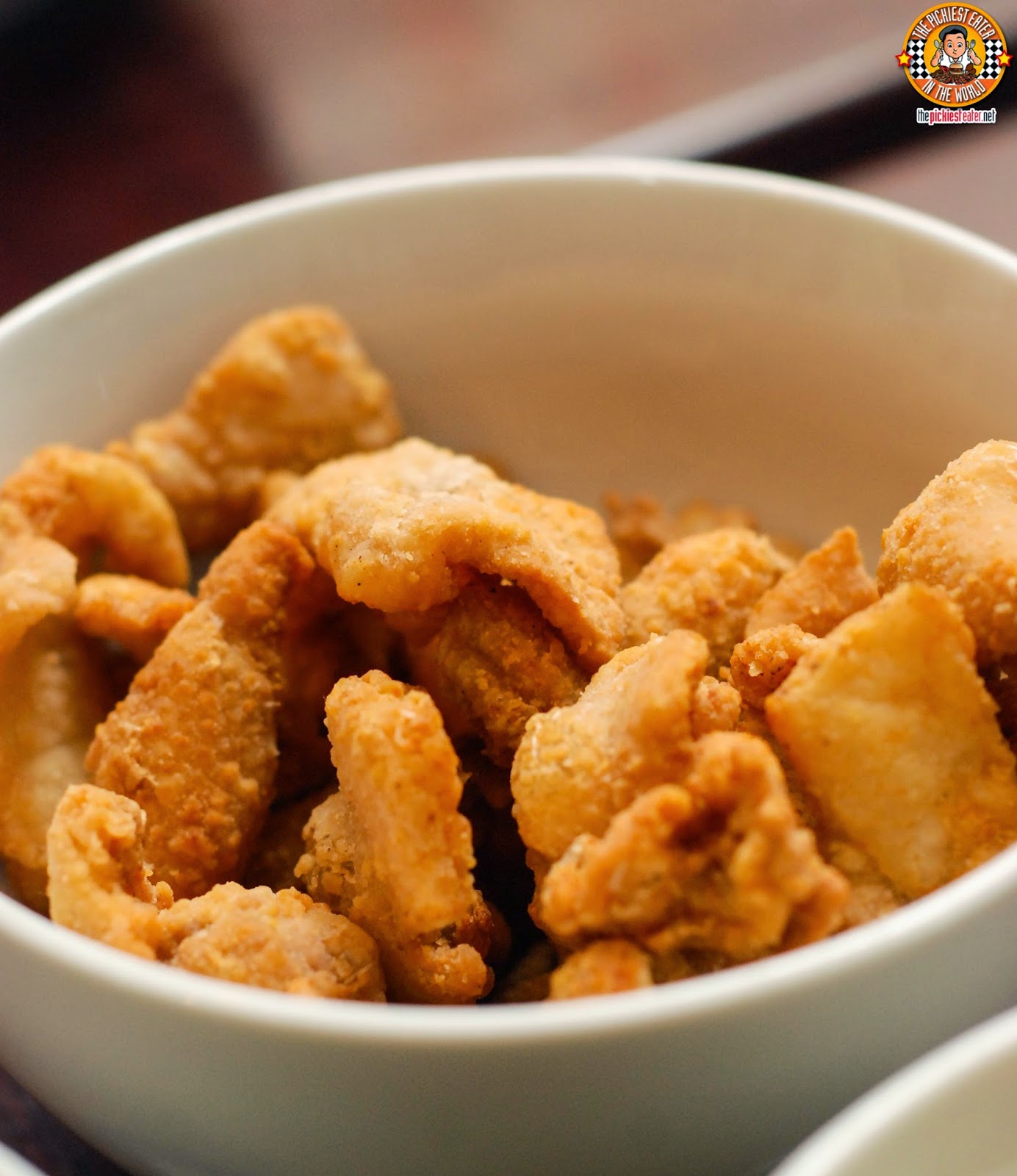 The meal started with the Crispy Chicken Skin (P135), a dish in which I have proven to be powerless to its sinful charms.  Bits of chicken skin were lightly coated and deep fried to a beautiful golden brown crisp, making it an appetizer that you could very well eat with rice. 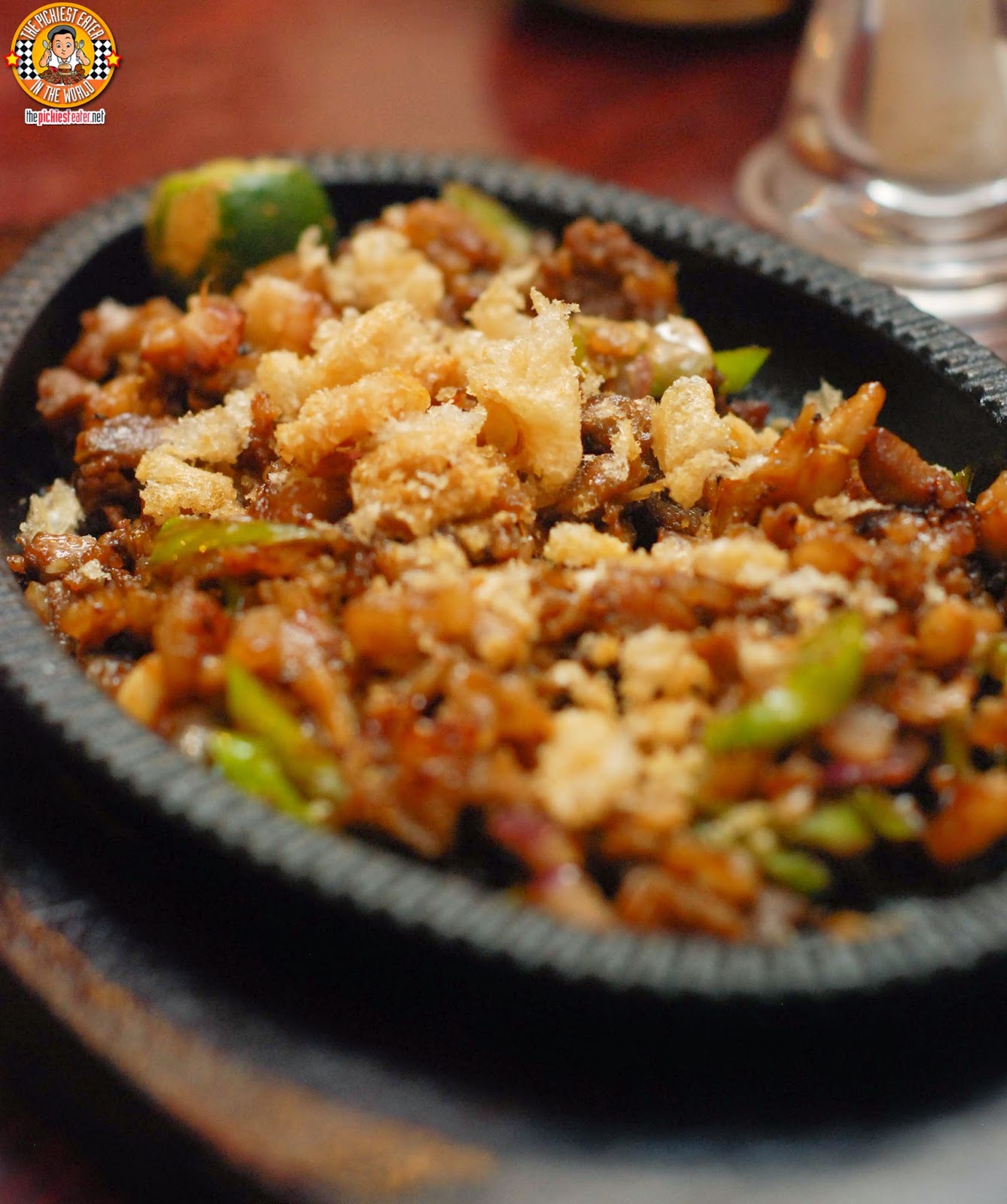 Another popular dish of of Salo (and for good reason), is their Sisig (P185). Who could resist gorgeous bits of sizzled pork face, peppered with sliced chilis for added touches of heat, and sprinkled with crispy chicharon? 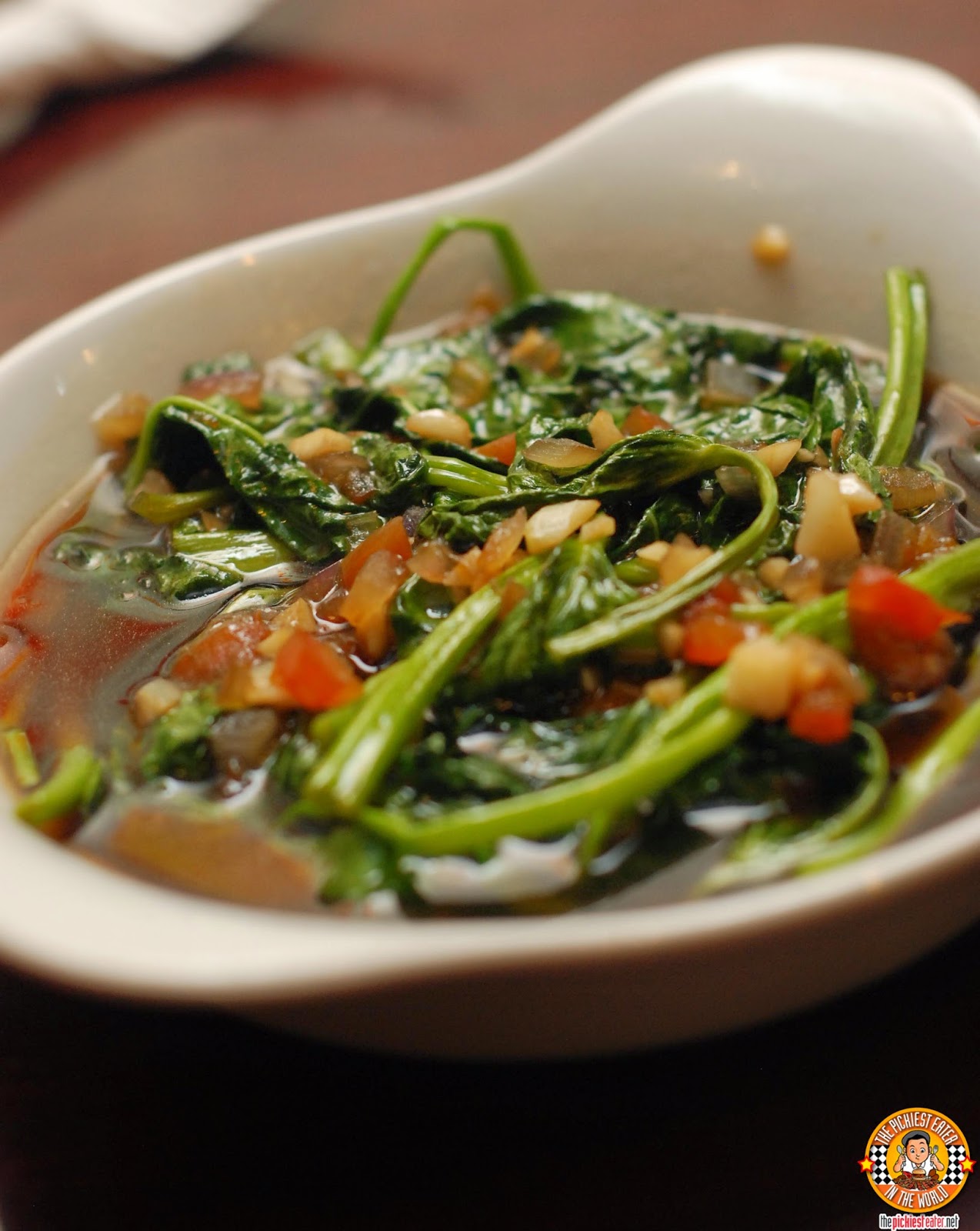 I don't know about you guys, but I noticed that whenever we go to a Filipino restaurant and someone asks for a vegetable dish, Adobong Kangkong (P80) is usual the go-to dish. Didn't try it.. but it looked.. umm.. "Colorful"? At eighty bucks though, that's a pretty good deal. 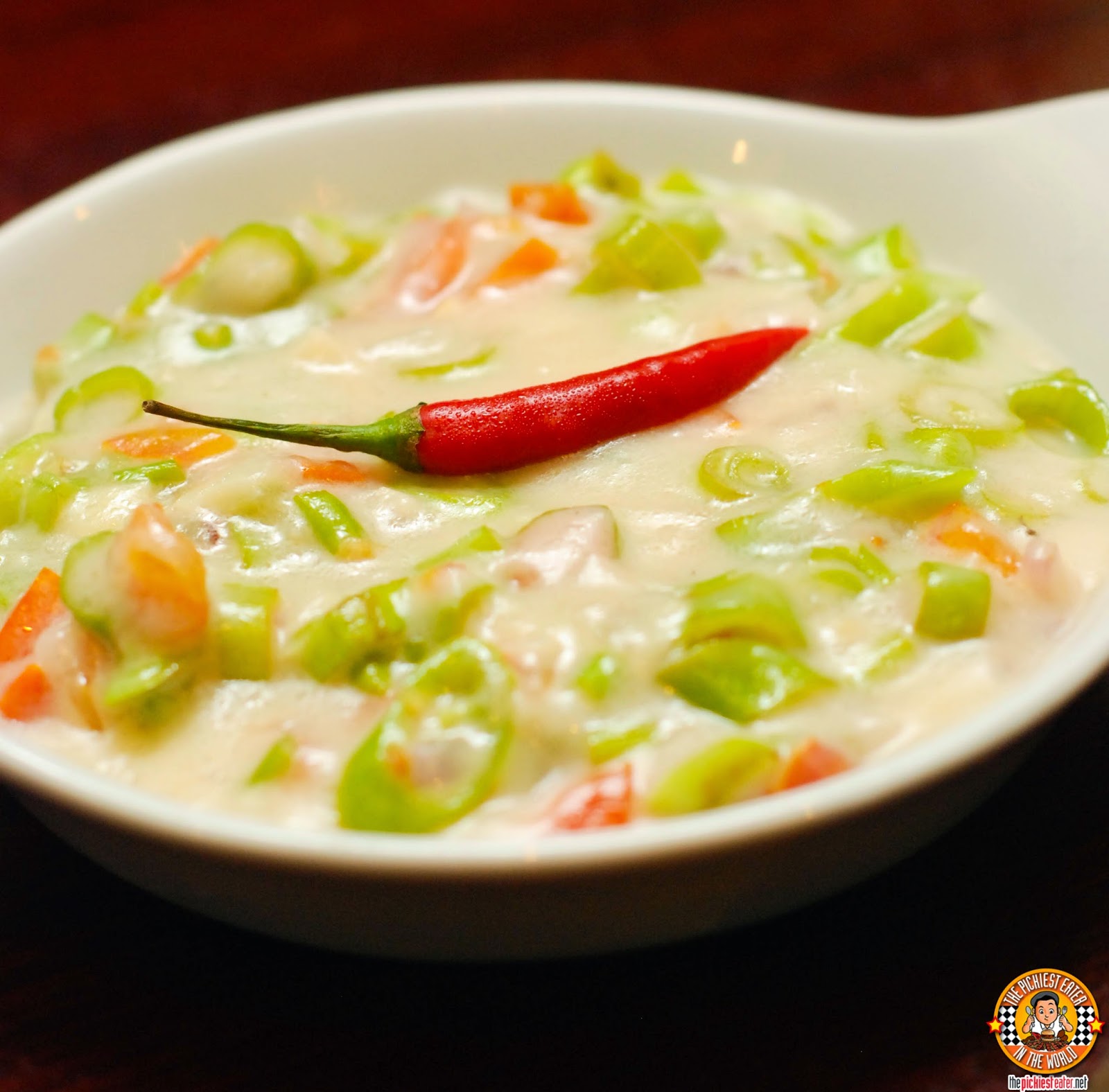 What I did try among the veggie dishes, was the Gising Gising (P120). The piece of Siling Labuyo nestled on top of the sliced beans swimming coconut milk should have tipped me off on the amount of heat I should have been expecting. Despite the fiery kick of the chili, which is more than enough to definitely wake you the hell up, I actually really enjoyed the creamy sweetness of the dish. 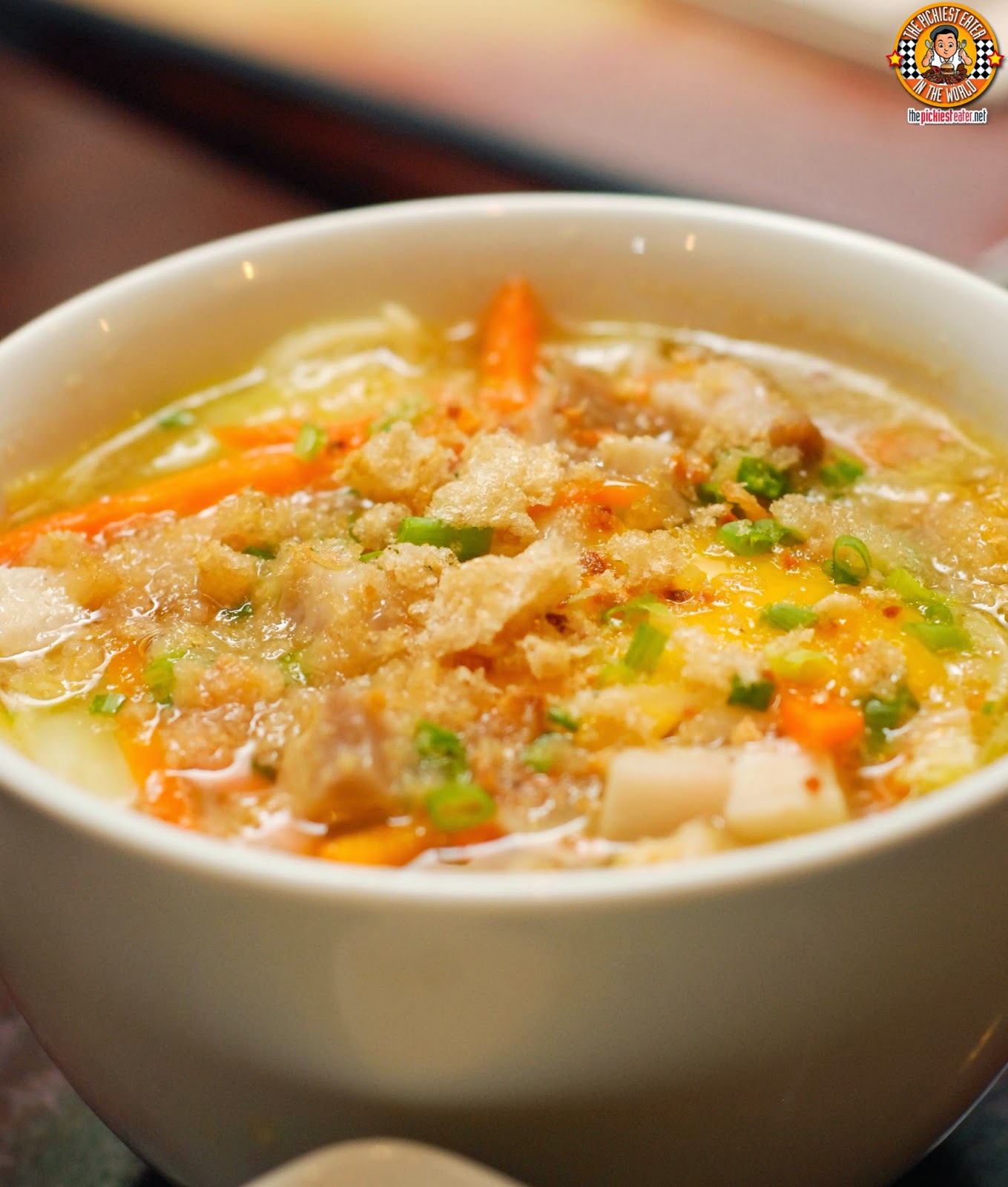 With Salo quickly becoming a popular drinking spot, I found it awfully considerate of them to come up with an Anti-Hangover menu. I'm admittedly not much of a drinker, but I'm fairly certain that there aren't very many better ways to clear your senses that with a steaming hot bowl of Batchoy (P140). 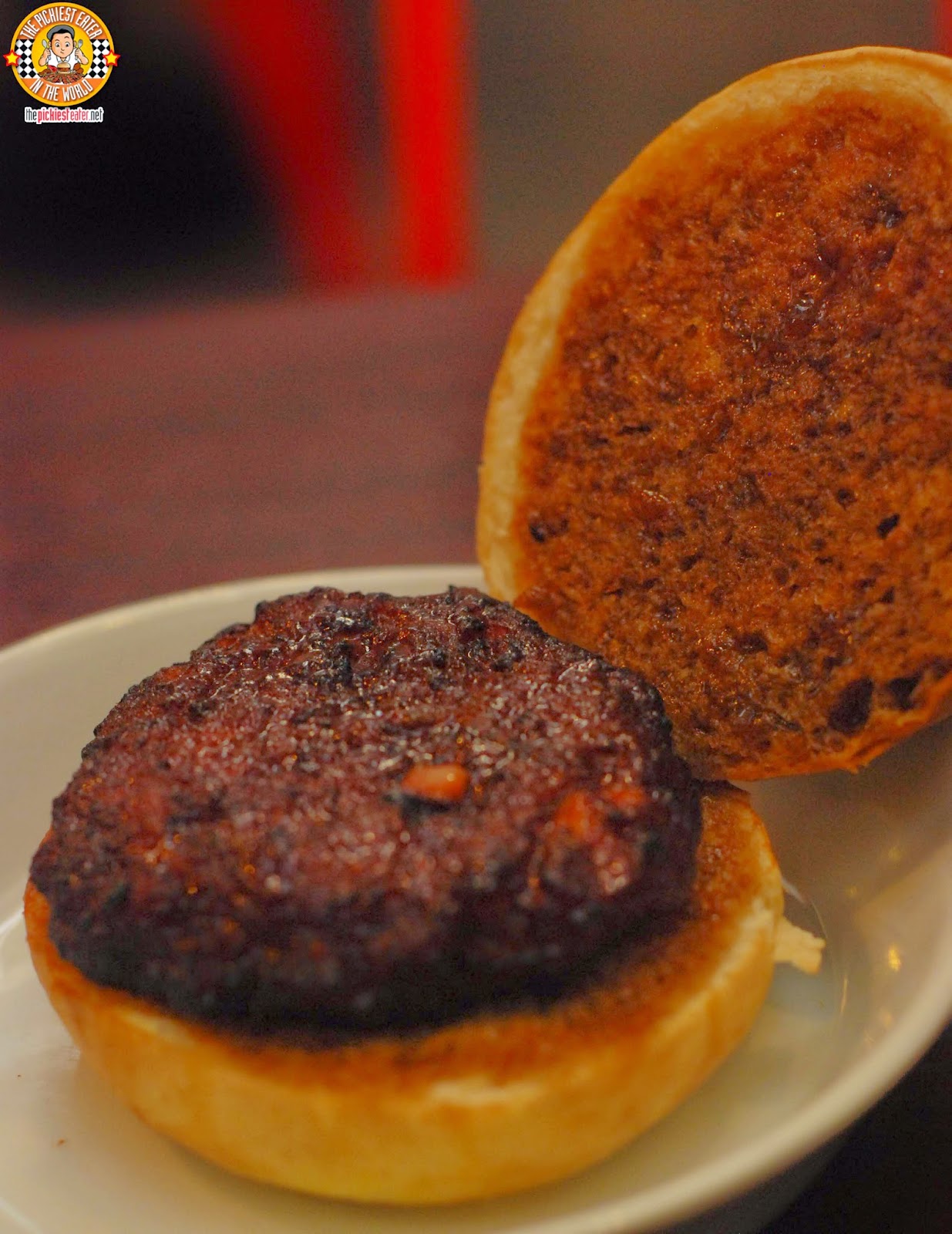 If I get drunk, I think I'm the kind of guy that would look more for the Longaburger (P90). A nice thick, juicy, sweet longaniza patty tucked between a nicely toasted bun. The Longaburger Extra (P160) Pumped up version.. with an extra Longa-Patty and a fried egg.

Something that made Salo a hit, especially among the lunch crowd, is their very affordable rice bowl meals. 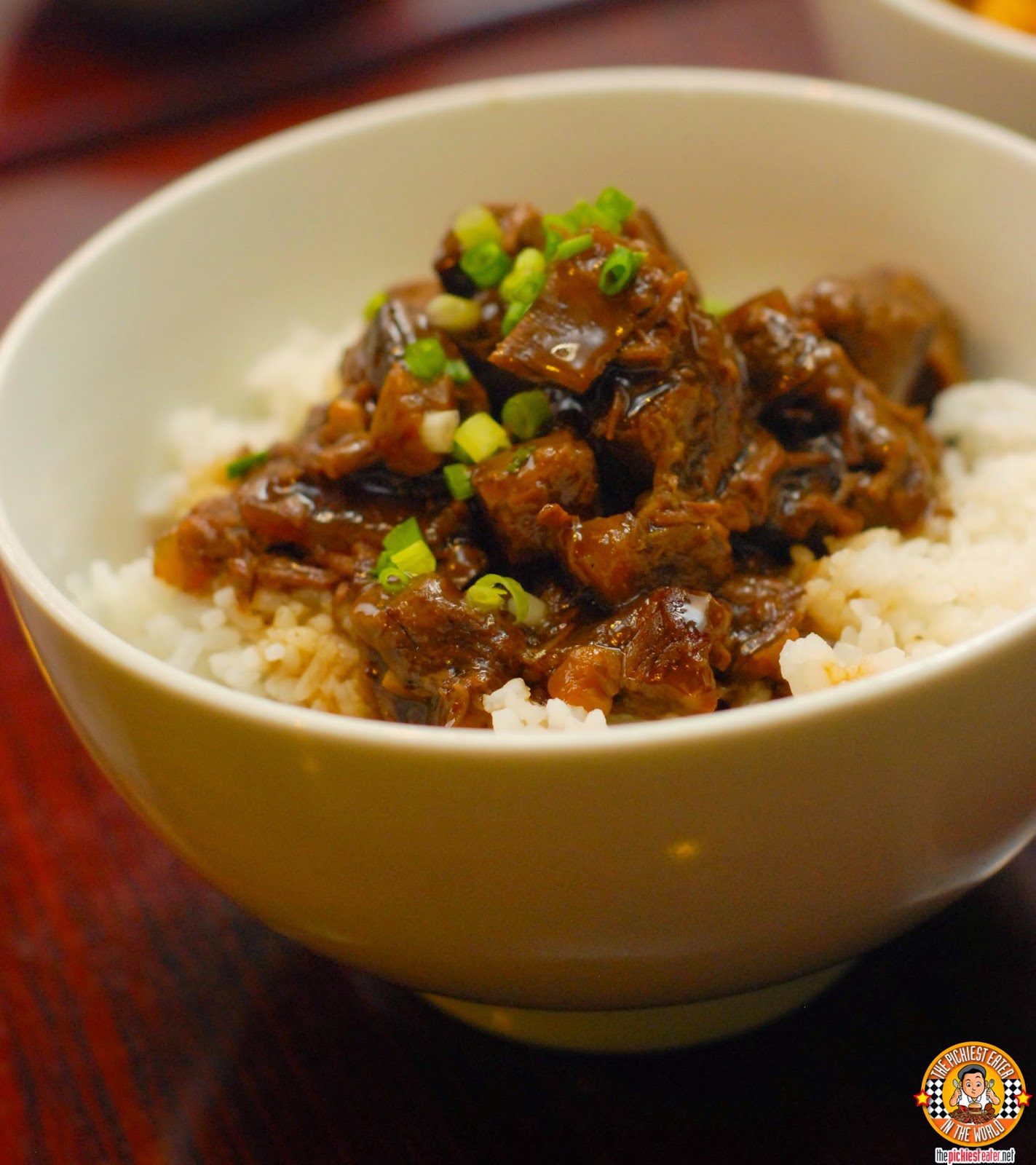 The Beef Pares Rice Bowl (P145) is one of those very good option for lunch. I was quite surprised with how tender the beef turned out to be, especially for its price. The chunks of beef were stewed in a lightly sweet sauce, that worked perfectly when mixed into its bed of steaming white rice. 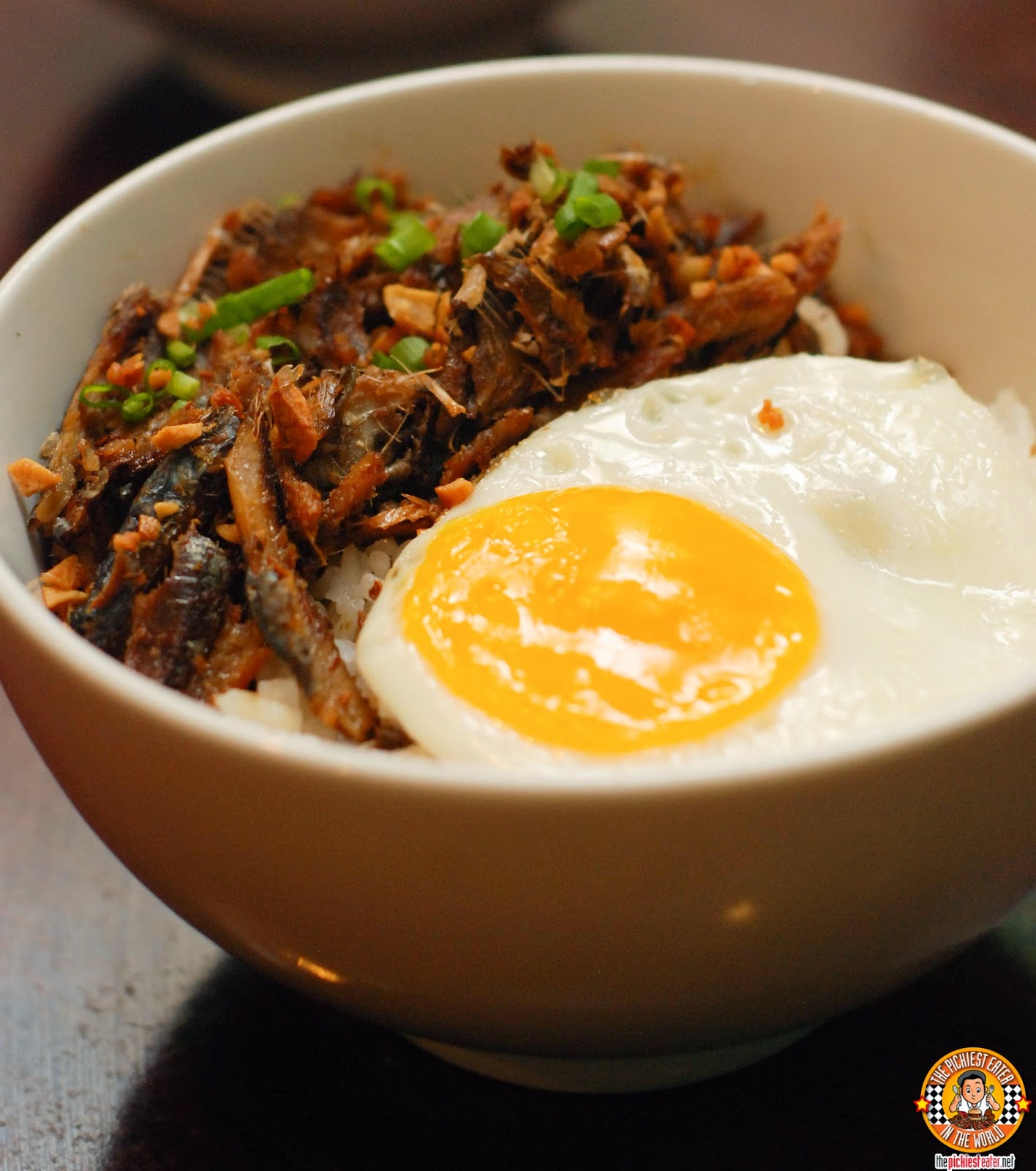 For those that can't get enough of breakfast food at anytime of the day, will be elated to know that they have dishes such Tuyosilog (P145), which has a generous portion of salt to go with it's beautifully cooked fried egg... 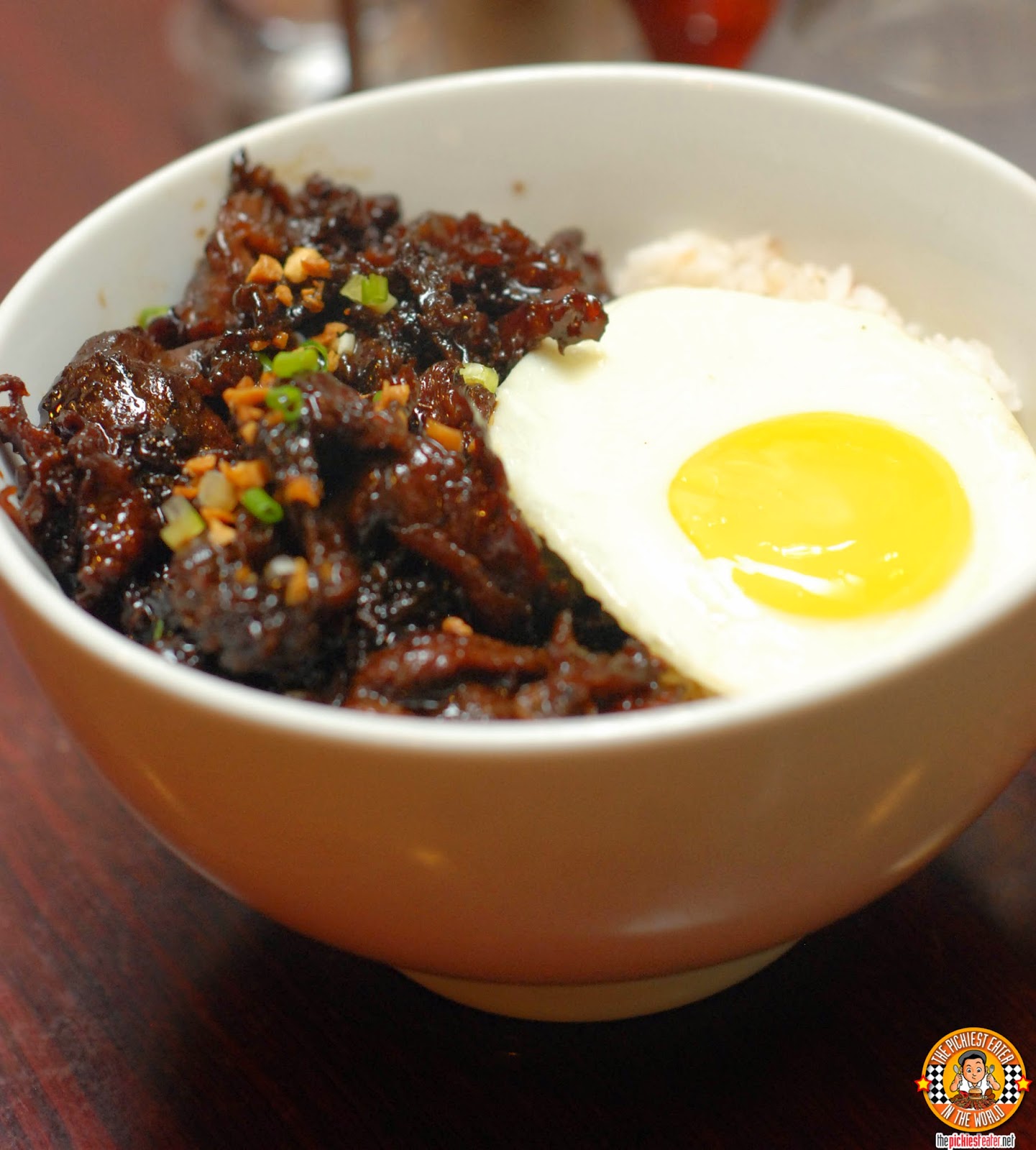 ...And of course, the ever dependable Tapsilog (P140)! I quite enjoyed the Tapsilog, with the thin slices of beef marinated wonderfully, coating the meat with a savory meets sweet combination. 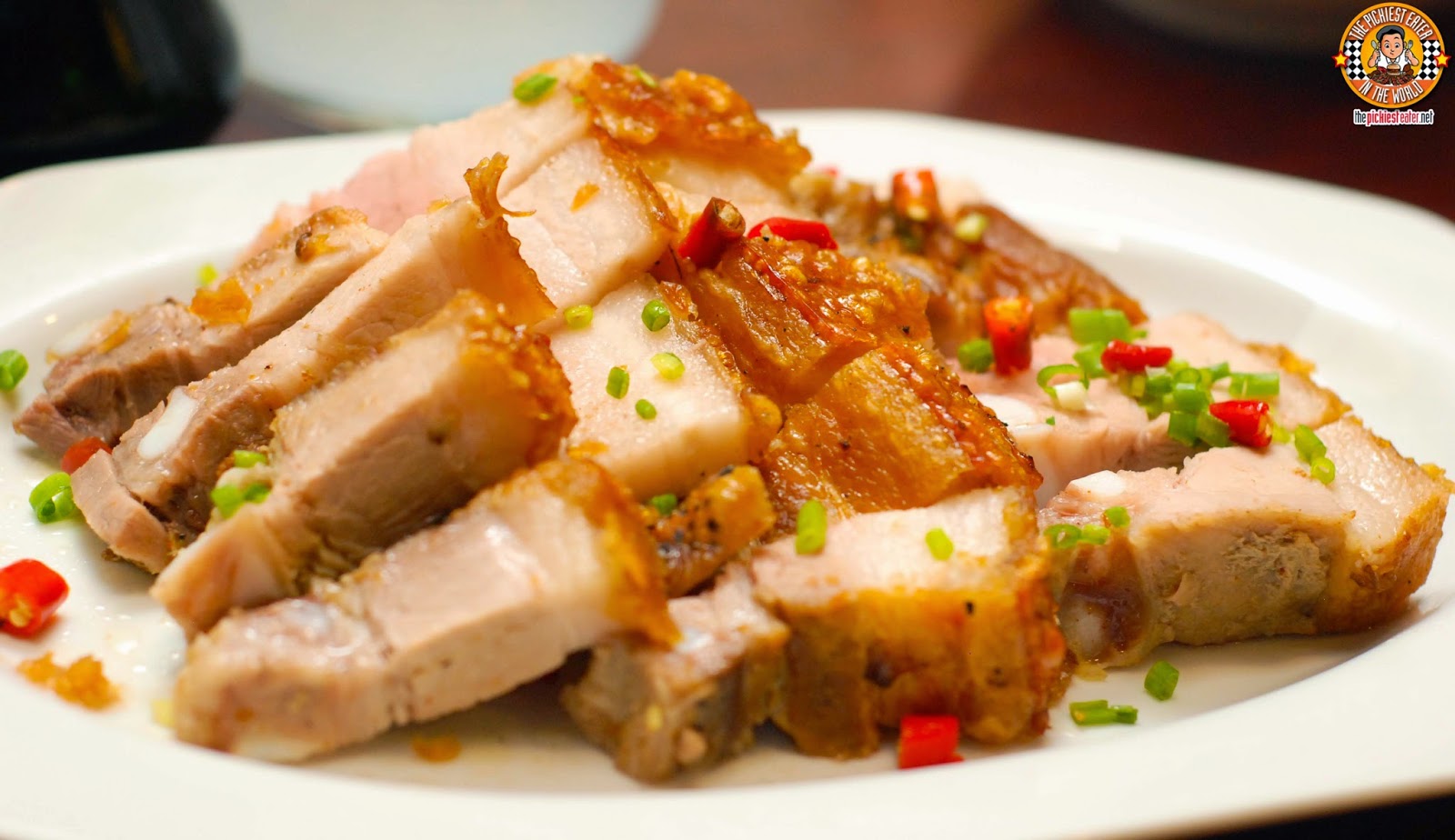 My favorite dish of the night was easily the Lechon Belly (P220 for 250g/P400 for 500g). Imagine this.. Juicy cuts of succulent pork belly, with a crisp lining of skin on top, seasoned wonderfully, that nary a drop of liver sauce or vinegar is needed.. For P220? 250 grams is definitely good for sharing, so if two of you are eating this, it only comes out to P110 per person!

I also enjoyed the sprinkling of minced Chilis, giving the pieces that kissed the meat a subtle touch of heat. I also appreciated that it was easy to remove the whole bits if I didn't want it too spicy. 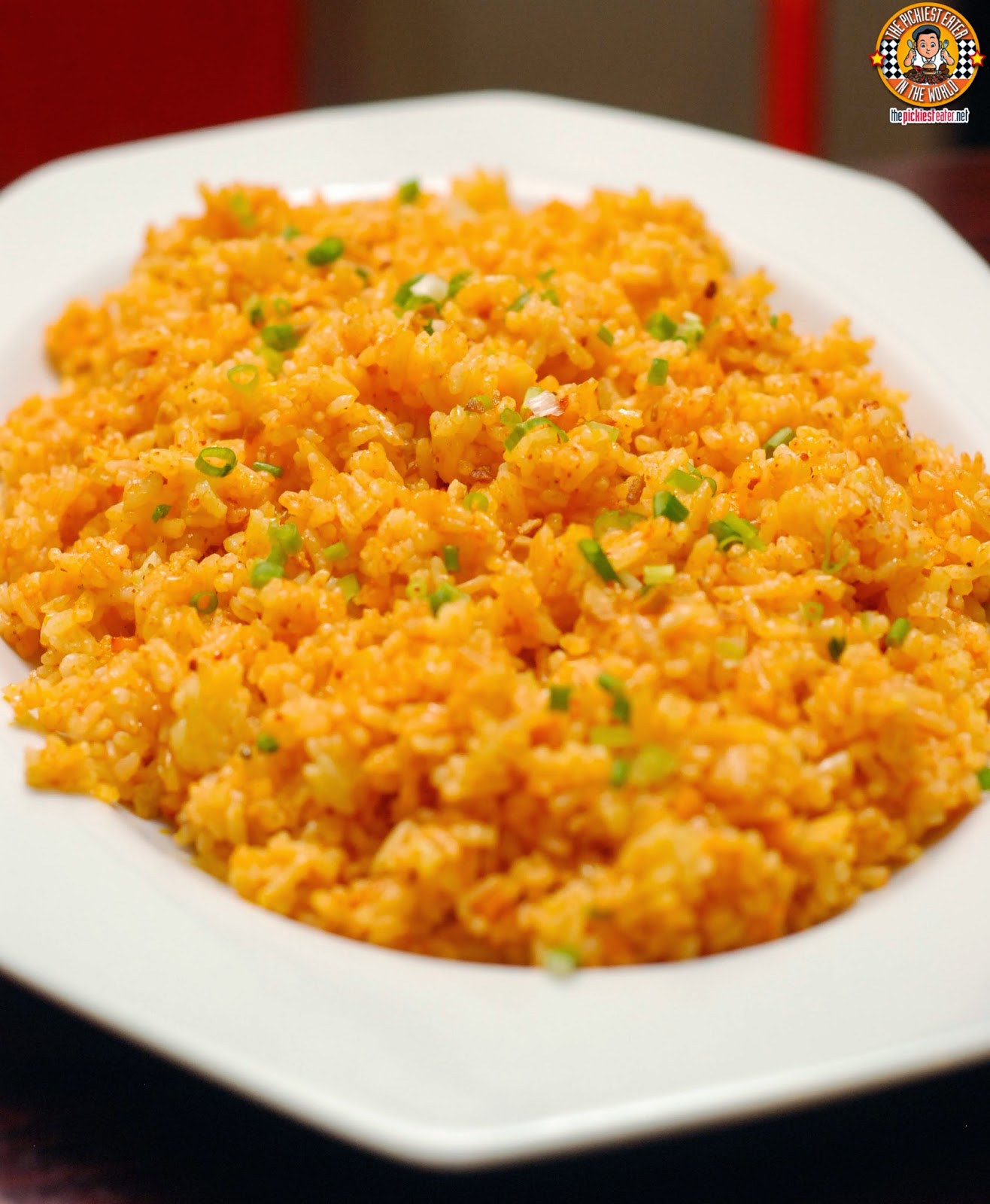 Unlike Rina, I don't eat so much plain rice. But unlike me, Rina doesn't eat so much fried rice. Well, Salo has some interesting Fried Rice choices, including The Aligue Fried Rice (P200). I'm truthfully not the biggest fan of Aligue. Let me rephrase, I don't like Aligue AT ALL. But the strange thing about Salo's aligue rice was that.. Well, I really liked it.

Maybe it was the fact that the aligue flavor wasn't too strong, giving the dish just enough flavor to compliment any dish that you order from Salo. Other interesting Fried Rice choices are Longa Rice (P170) & Adobo Rice (P185).

Although I am going to sorely miss Shawarma Guy's Bacon Shawarma and Sisig Shawarma, my experience at Salo has helped alleviate that pain.

The comforting, not to mention mouth-watering dishes at very reasonable prices are more than enough to make anyone come back to Salo for more! 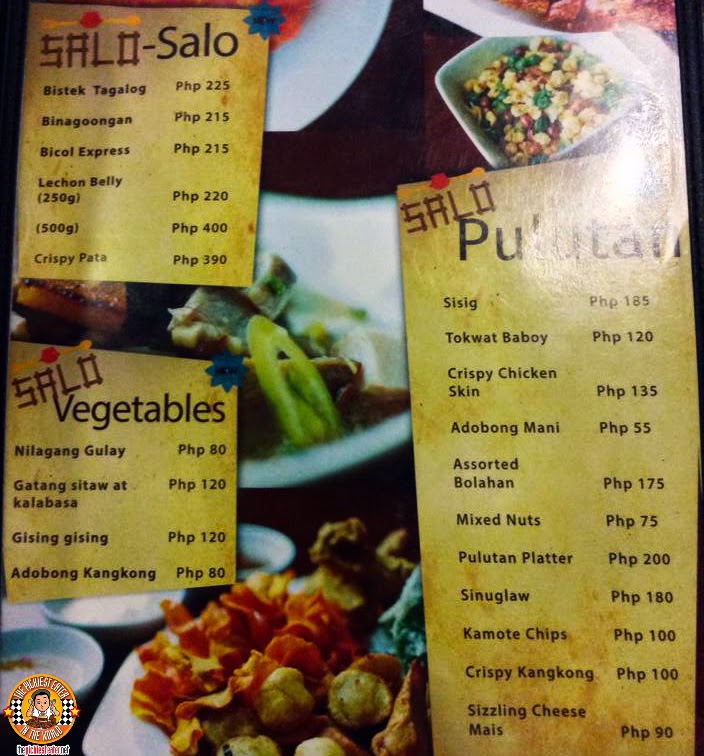 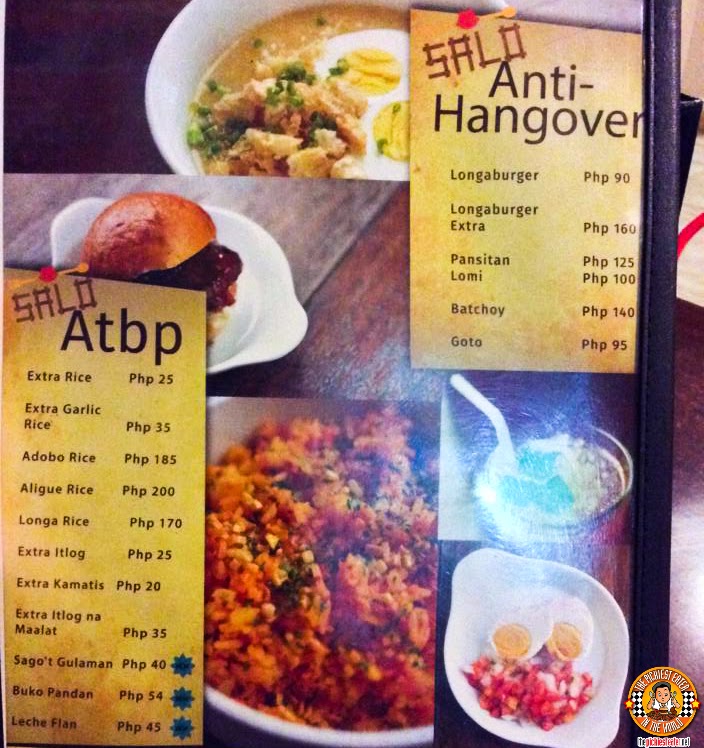