VIKINGS LUXURY BUFFETS AT SM BF.: SAILING ON TO THE SOUTH! 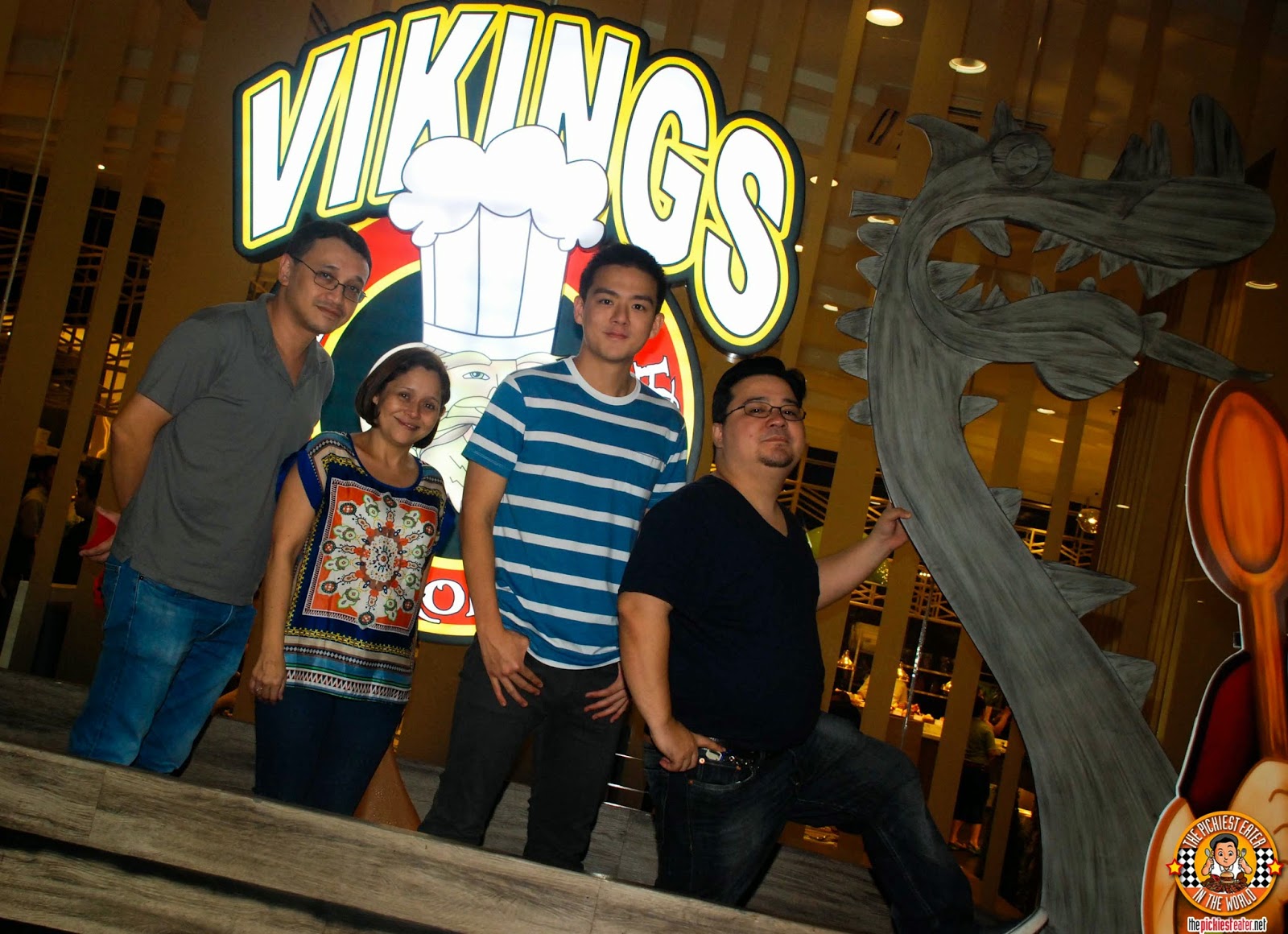 Are you a buffet guy/gal? Some people are intimidated by a large "Smorgasbord" (as my dad calls it), but not me. Being a picky eater by nature, the wider the choices, the better the chance there is for me to find dishes that suits my finickiness, without having to worry about my Rina making a sacrifice because I don't eat some dishes that she likes (such as shrimps, etc.).

Ten or so years ago, buffet restaurants were few and far between. The more high profile choices ranged from the Triple V group (Dad's, Saisaki, Kamayan and later on, Sambokojin), but after that, you were relegated to choosing a place from the expectedly more expensive selection of hotel restaurant spreads.

In recent years, the evolution of the buffet restaurant has emerged. Now, a buffet dinner need not be only for special occasions such as birthdays or graduations, but as a more common way to bond over food.. and A LOT OF IT.  More affordable buffet restaurants have sprung up, that gives you the feel of a luxury buffet, without you having to break the bank in order to enjoy.

At the forefront of that movement is Vikings Luxury Buffet.

After conquering various parts of Northern Metro Manila Vikings took its first step in it's Southern invasion with it's opening of their newest branch, in SM B.F.!

I don't frequent the South very often so I was pretty shocked to see a shopping mall sprouting out of seemingly nowhere. Instead of the McDonald's that I had been accustomed to as my landmark for the left turn going to President's Avenue, in its place was is now SM BF. 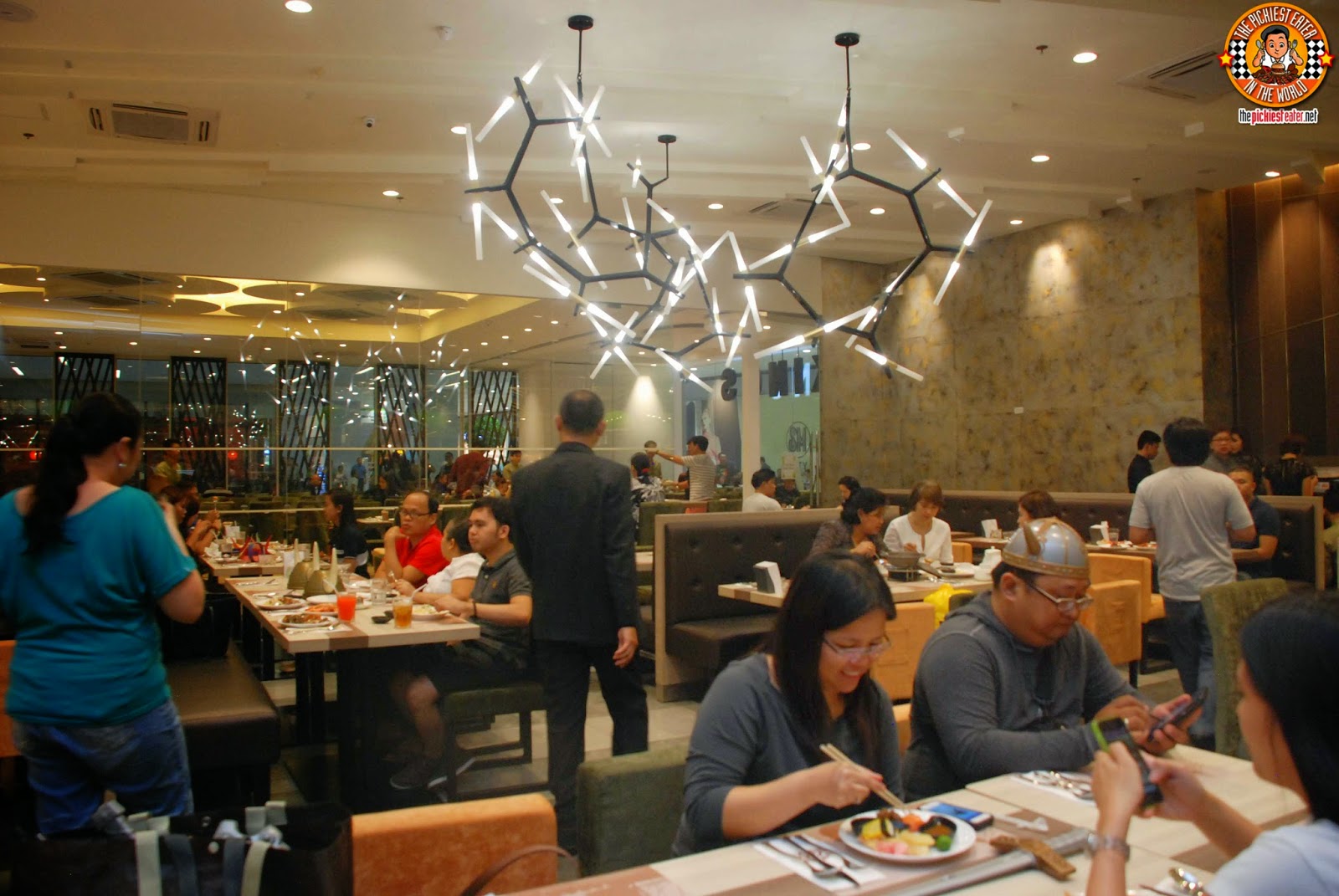 The mall itself is still fairly new, so I figured that there wouldn't be so much people roaming around just yet.

It turned out, I was half right. There weren't too many people roaming around in the common areas, making the mall seem a bit empty, especially when compared to other SM Malls. But the reason seemed to be because most of the people had congregated in front of the newly opened Viking's, forming a line that would have made a One Direction fan burst into tears. 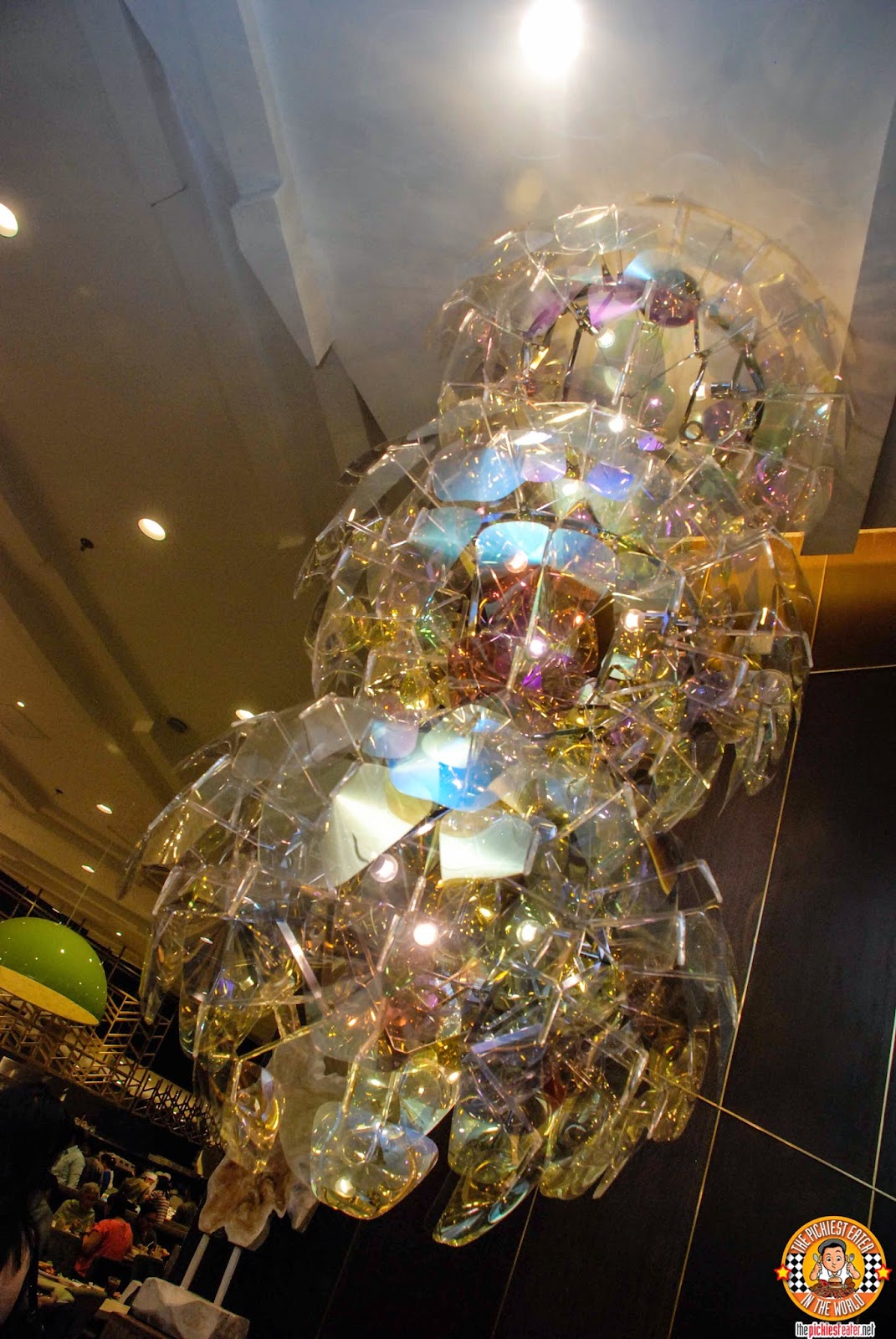 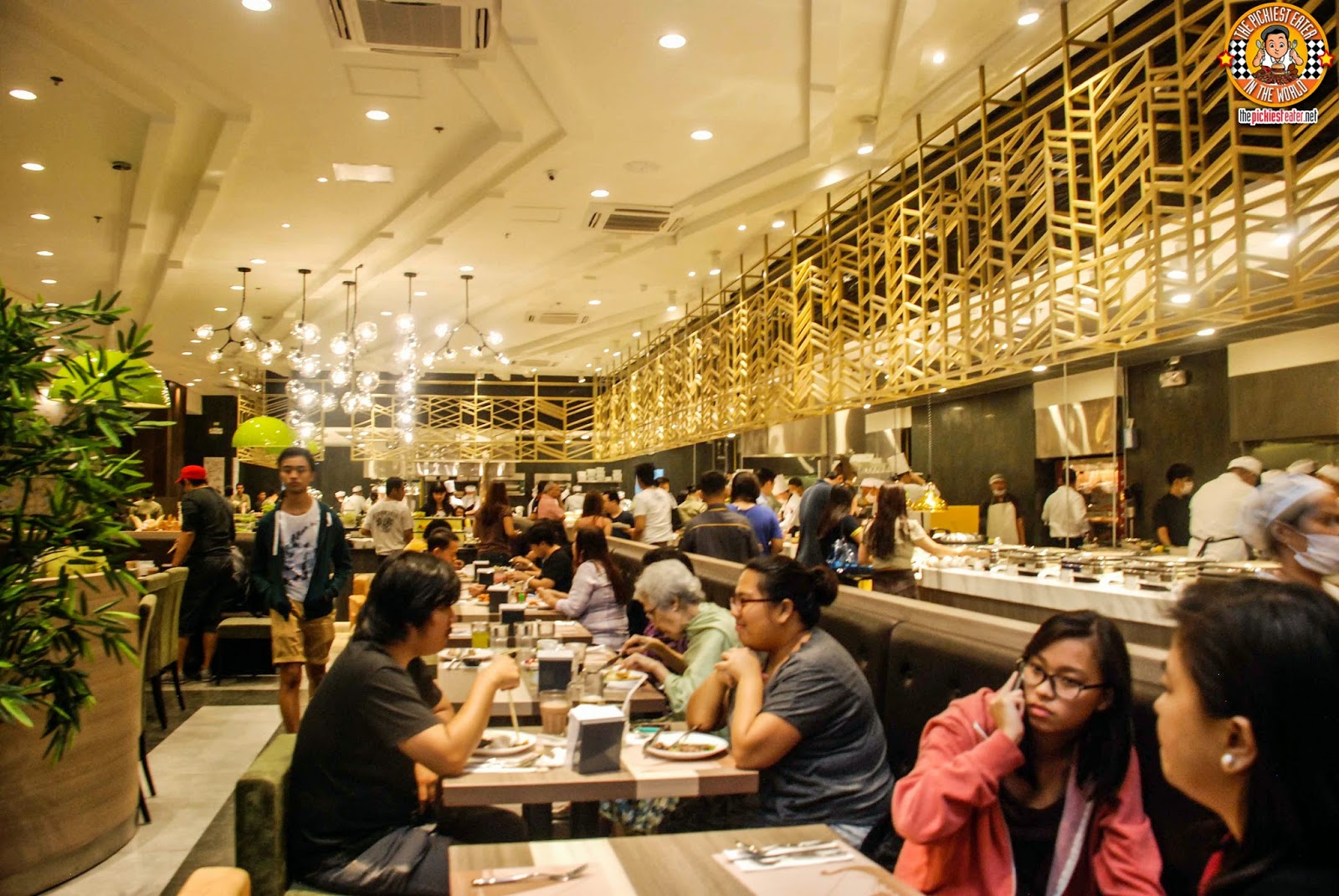 The Vikings SM BF Branch is stunning. It has an elegance about it that makes you feel you are dining in a posh hotel, with it's classy interiors making you forget that you're actually in an SM Mall. 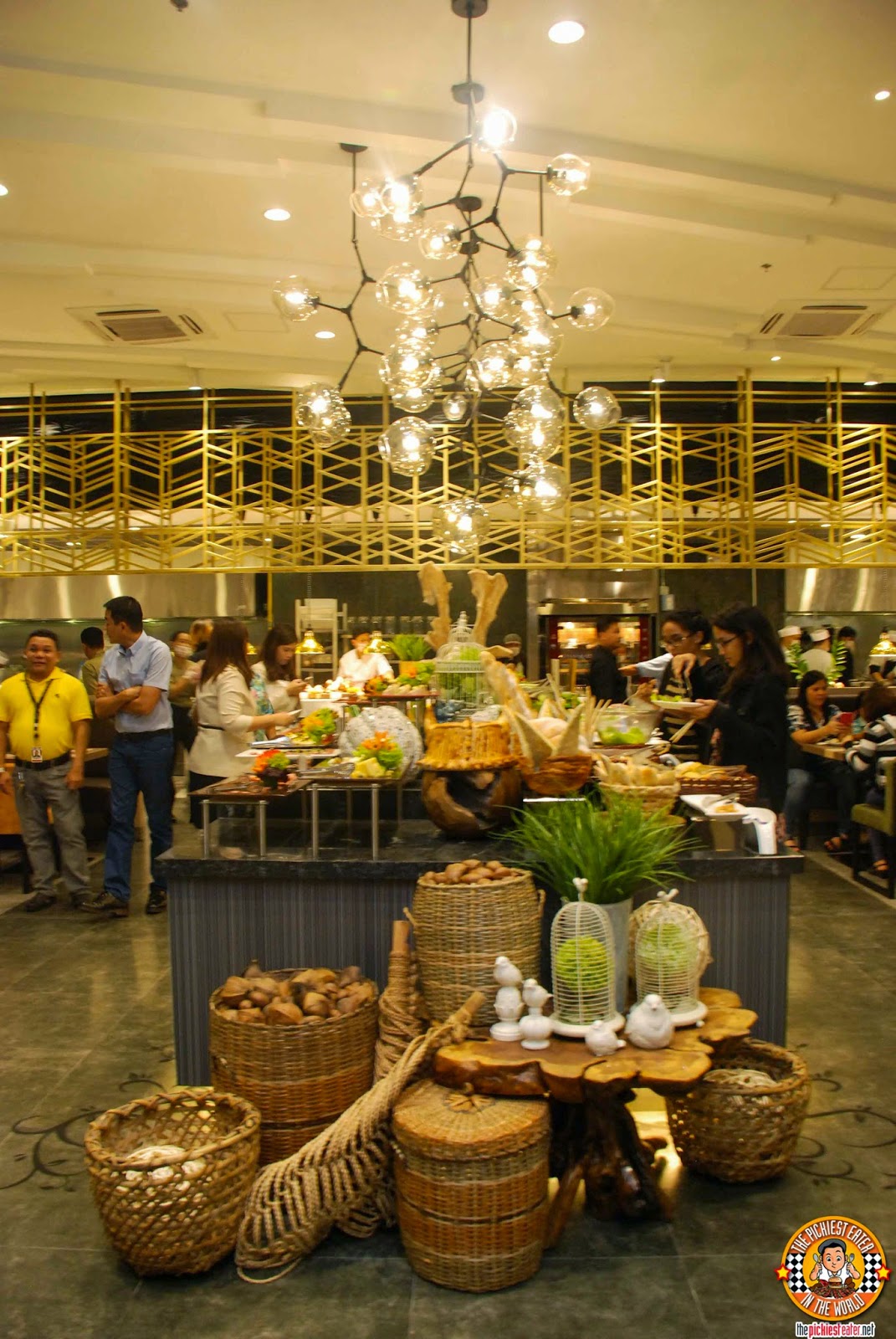 The buffet spread was remenicscent of the Megamall Branch, so I'll show you some of the notable dishes whipped up by Executive Chef Anton Abad and his team, that you'll find at the SM BF branch! 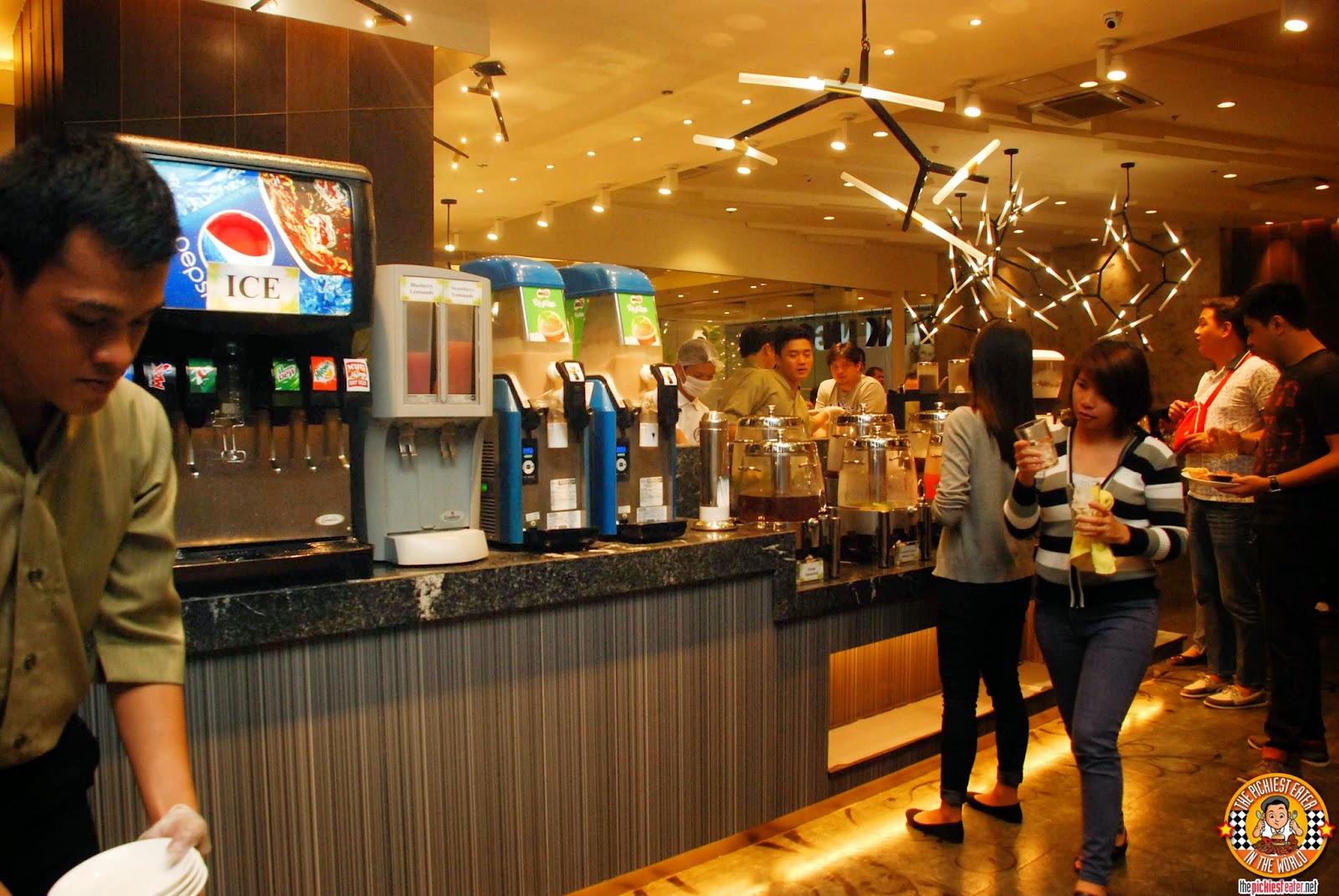 At Vikings, you have an unlimited supply of drinks! I particularly like their Four Seasons :) 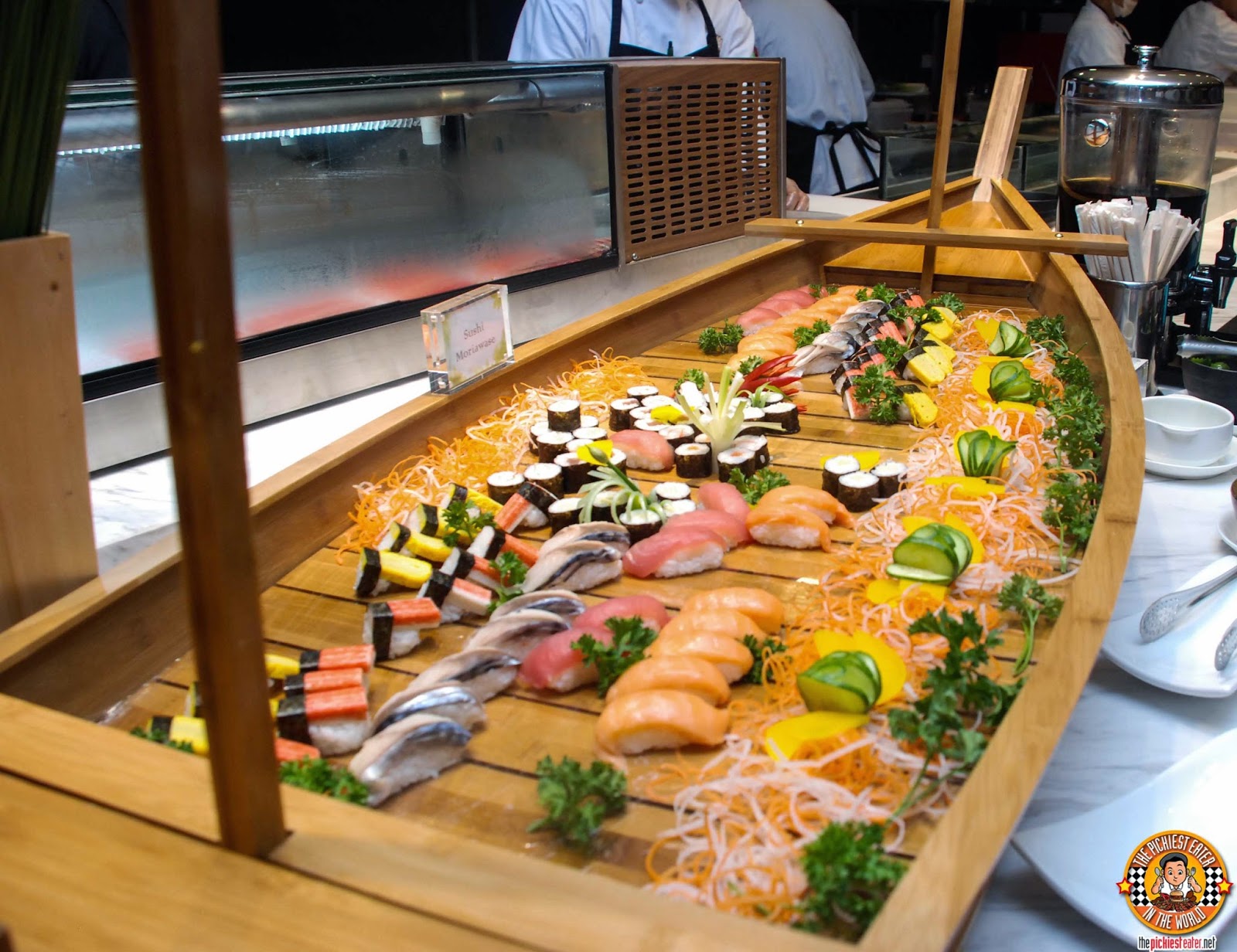 My sister and her husband Julio joined forces and nearly sunk this sushi boat all by themselves. 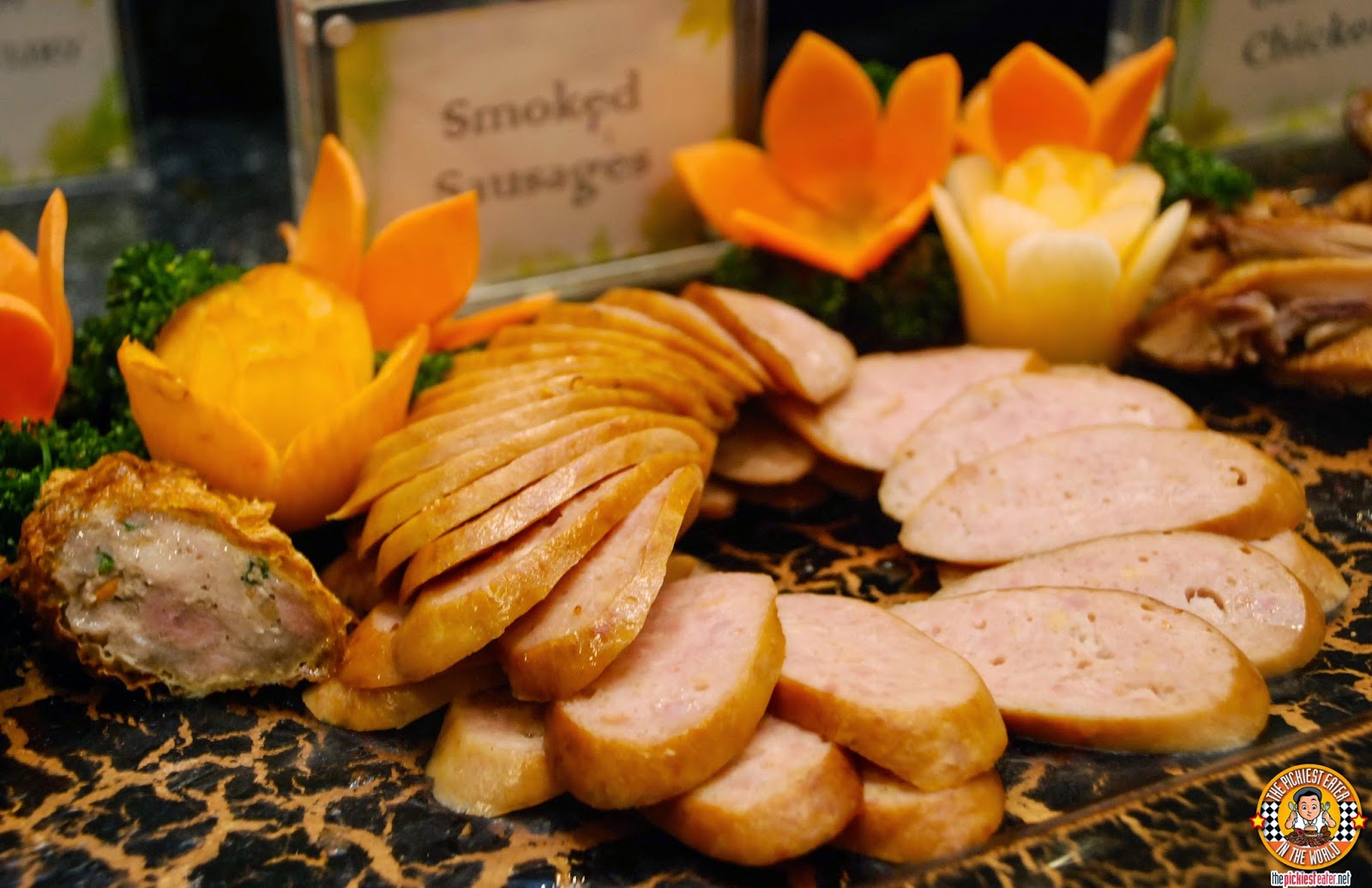 Rina and I focused on the Smoked Sausages for our appetizers.. Although a sneaky little Kikiam found its way to my plate.. It was actually pretty good as well. 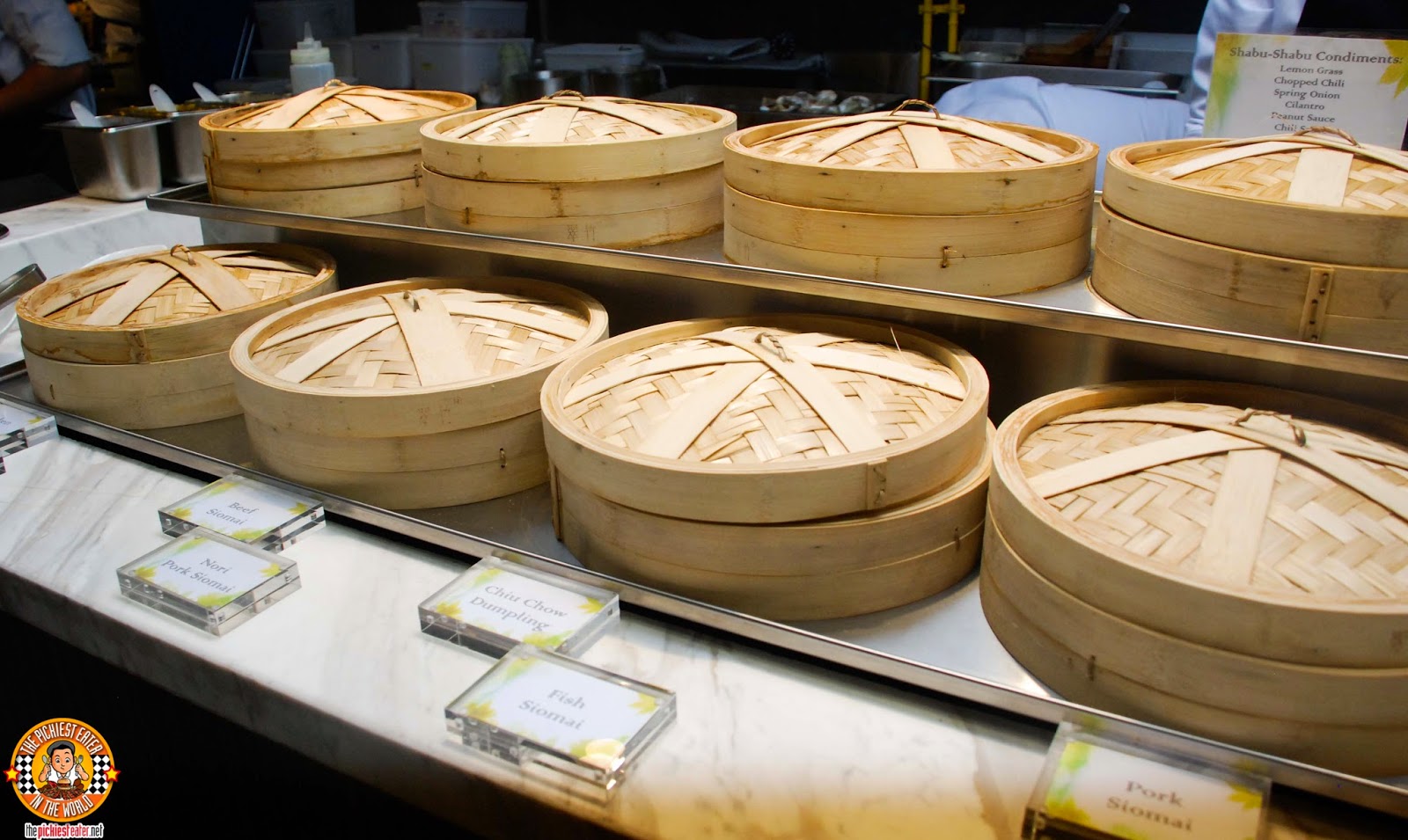 There is a number of Siomai and Dumplings that you may choose from in the Dimsum station!
ENTREES

The Filipino Entrees showcased the creativity of Chef Anton, and how he manages to fuse the flavors of different cultures together. 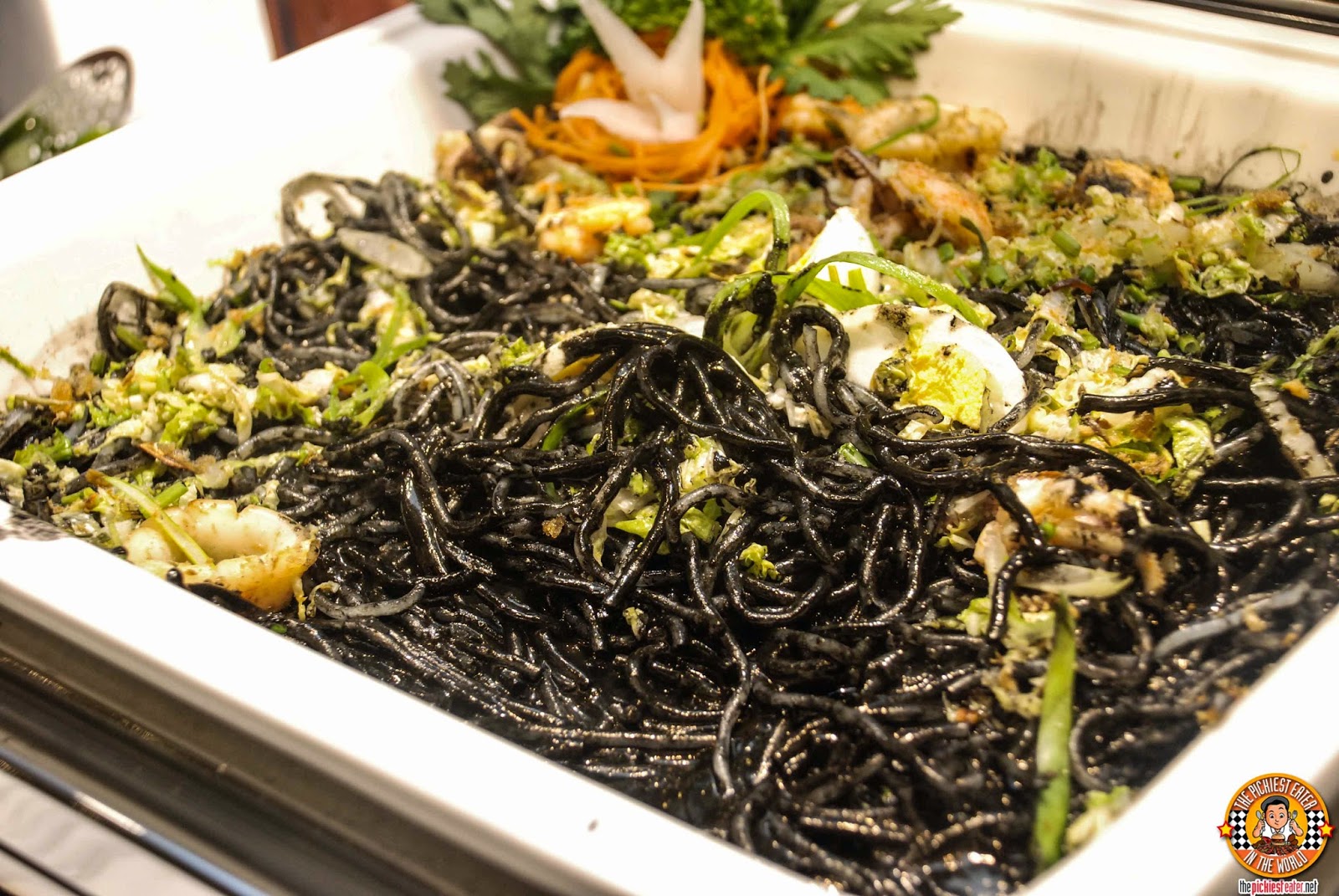 The Black Palabok was a unique take on the Pinoy classic that uses an infusion of squid ink over the noodles with mixed seafood. 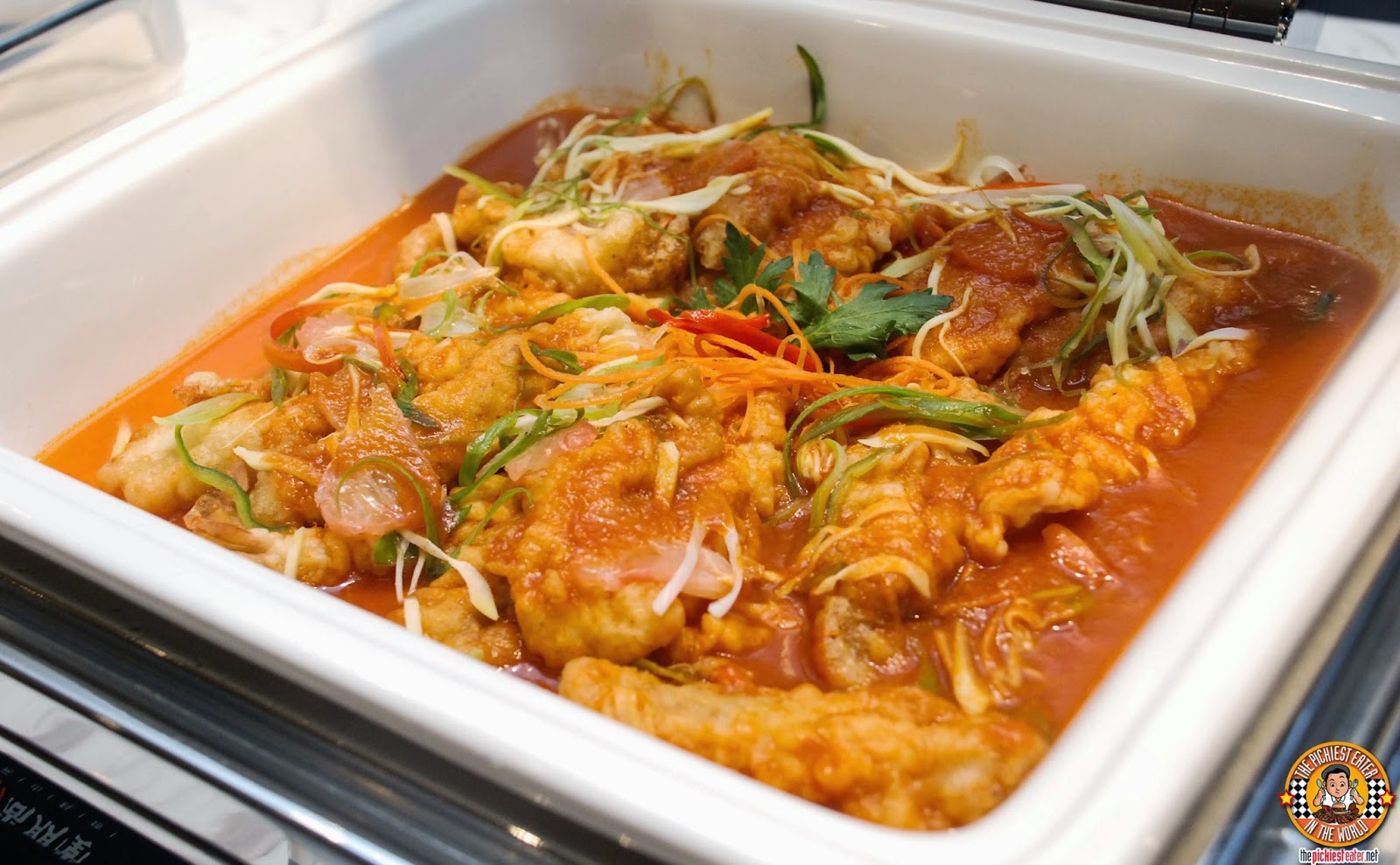 The Beer Battered Fish Escabeche was yet another modern twist to a classic, and worked wonderfully. 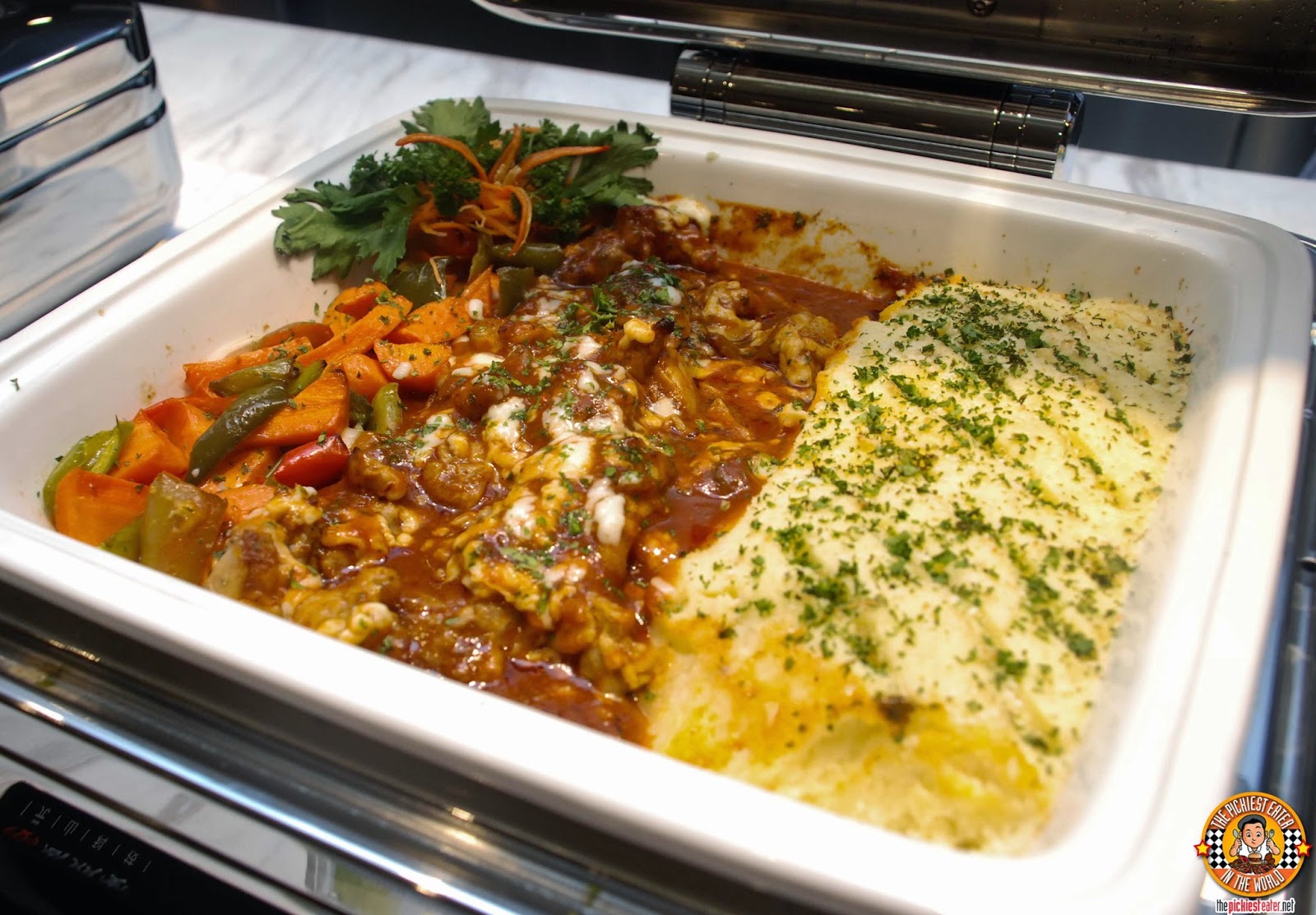 Another hit was the very tasty Baked Chicken Caldereta.

Afterwards, I made my way to the Chinese entrees.. One of my favorite Cusines! 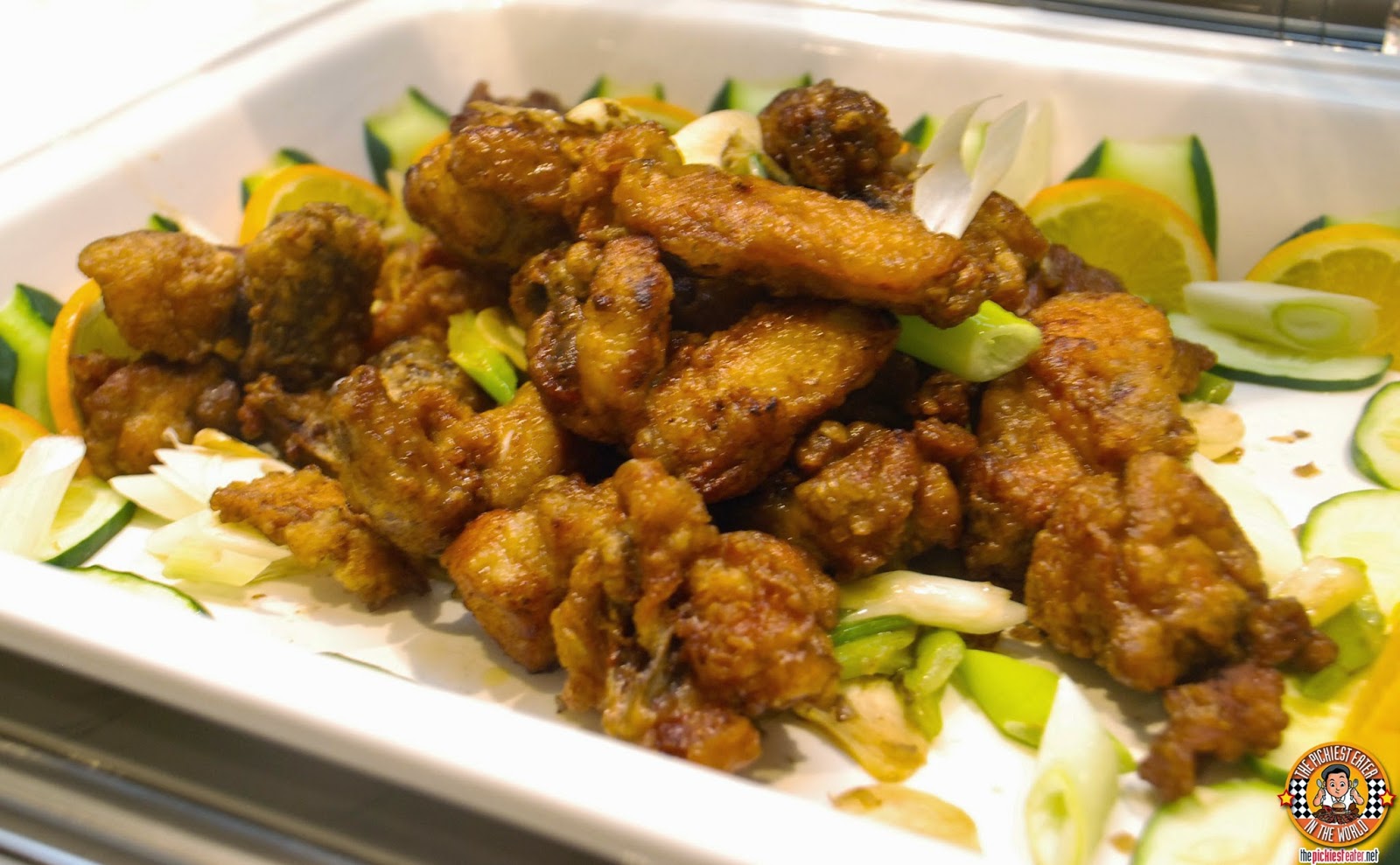 The Buttered Chicken was a little on the oily side, but I actually didn't mind so much because it was really quite delicious. 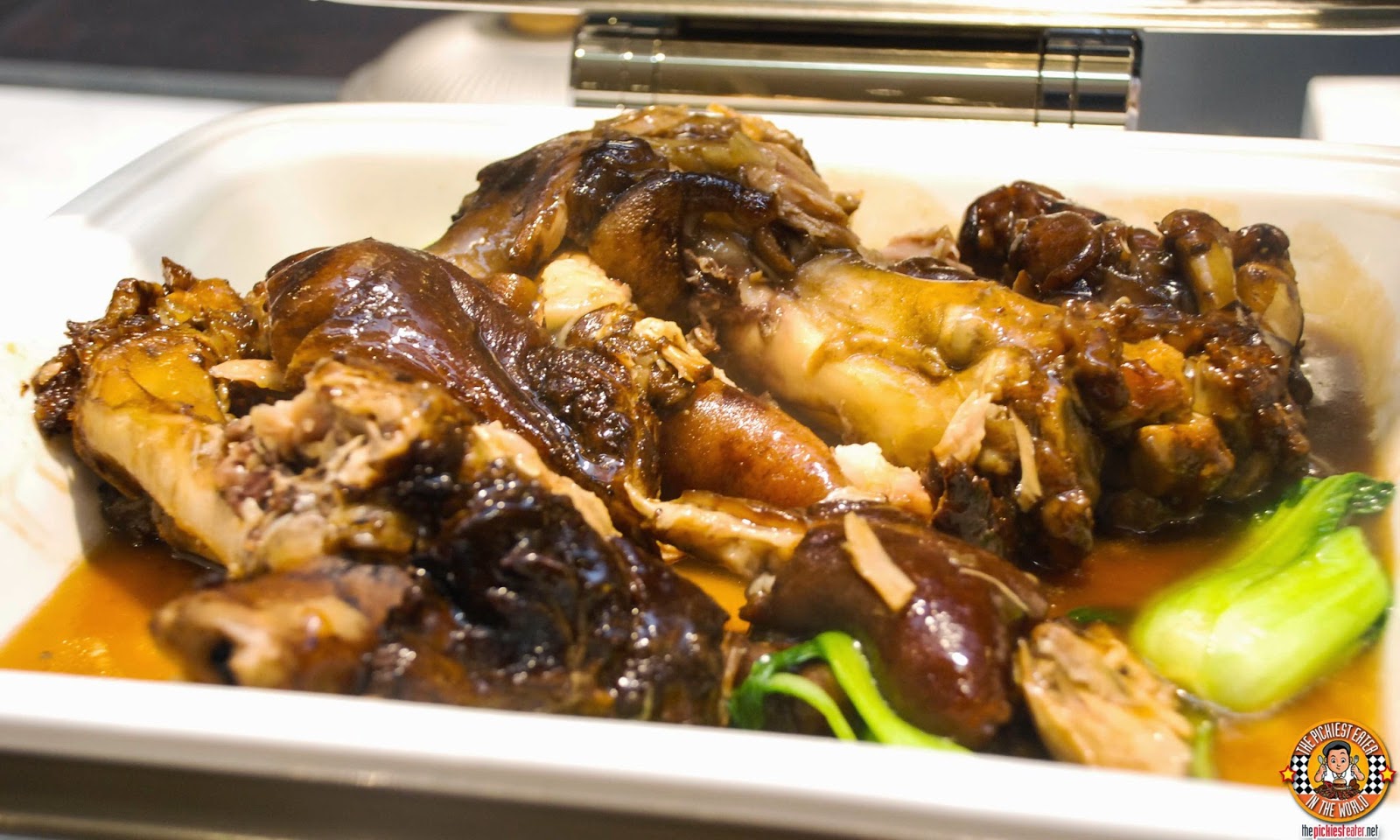 The Pata Tim was remarkably tender, with the meat was bathed in a thick, lightly sweet sauce. 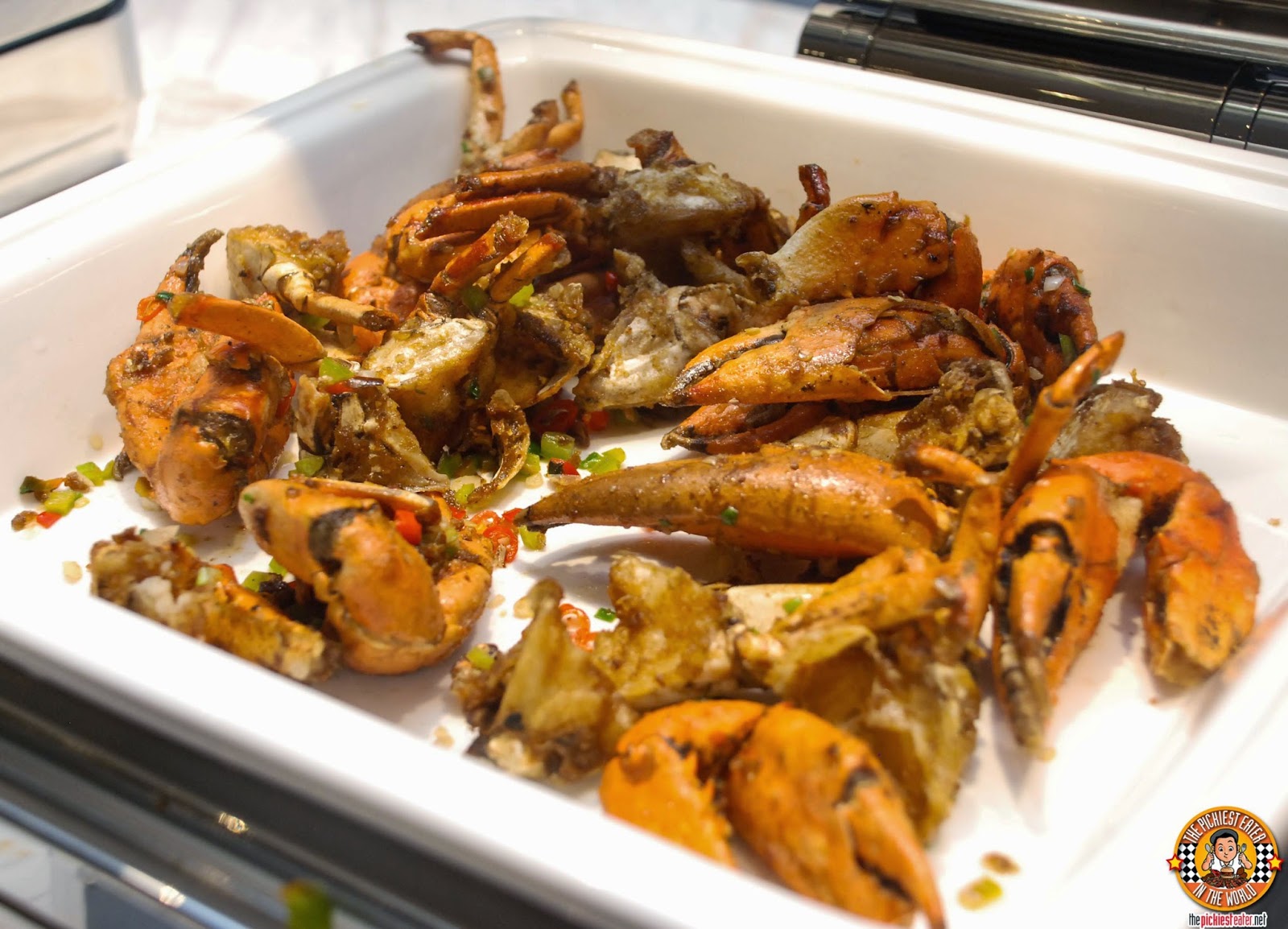 Rina waged an all out assault on the Salt and Pepper Crabs! 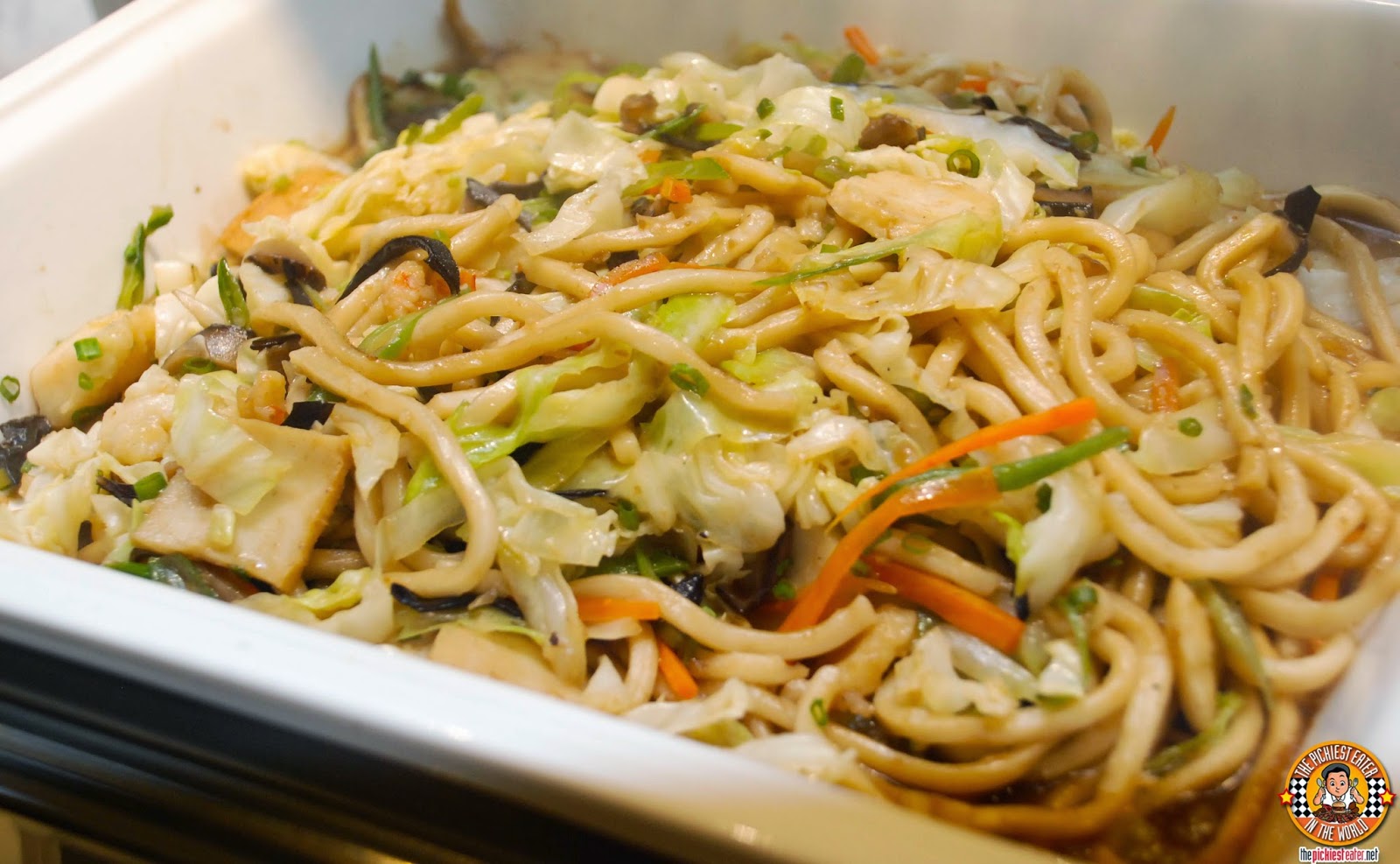 While I enjoyed the Stir Fried Seafood Udon as well, even if I did pick out the squid and shrimp bits hehe... (Sorry, Picky Eater). 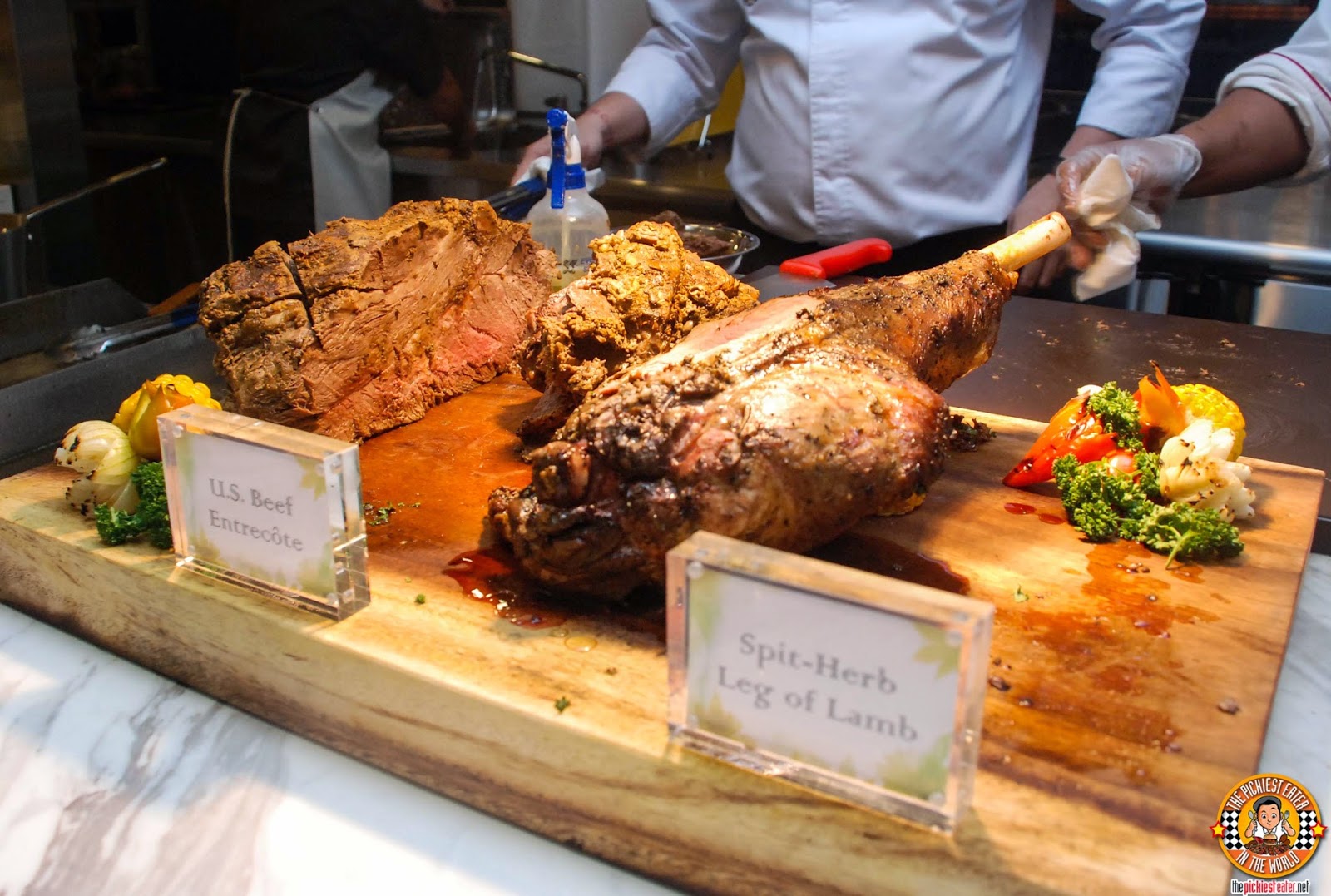 I normally don't do starters when I'm at a buffet. I find it ridiculous to go to a buffet and start off with a salad, or even sushi and the like. If I'm spending money AND calories, i'm gonna make sure its worth my while, and go straight for the carving station.

For me, the meat is where the fun's at. 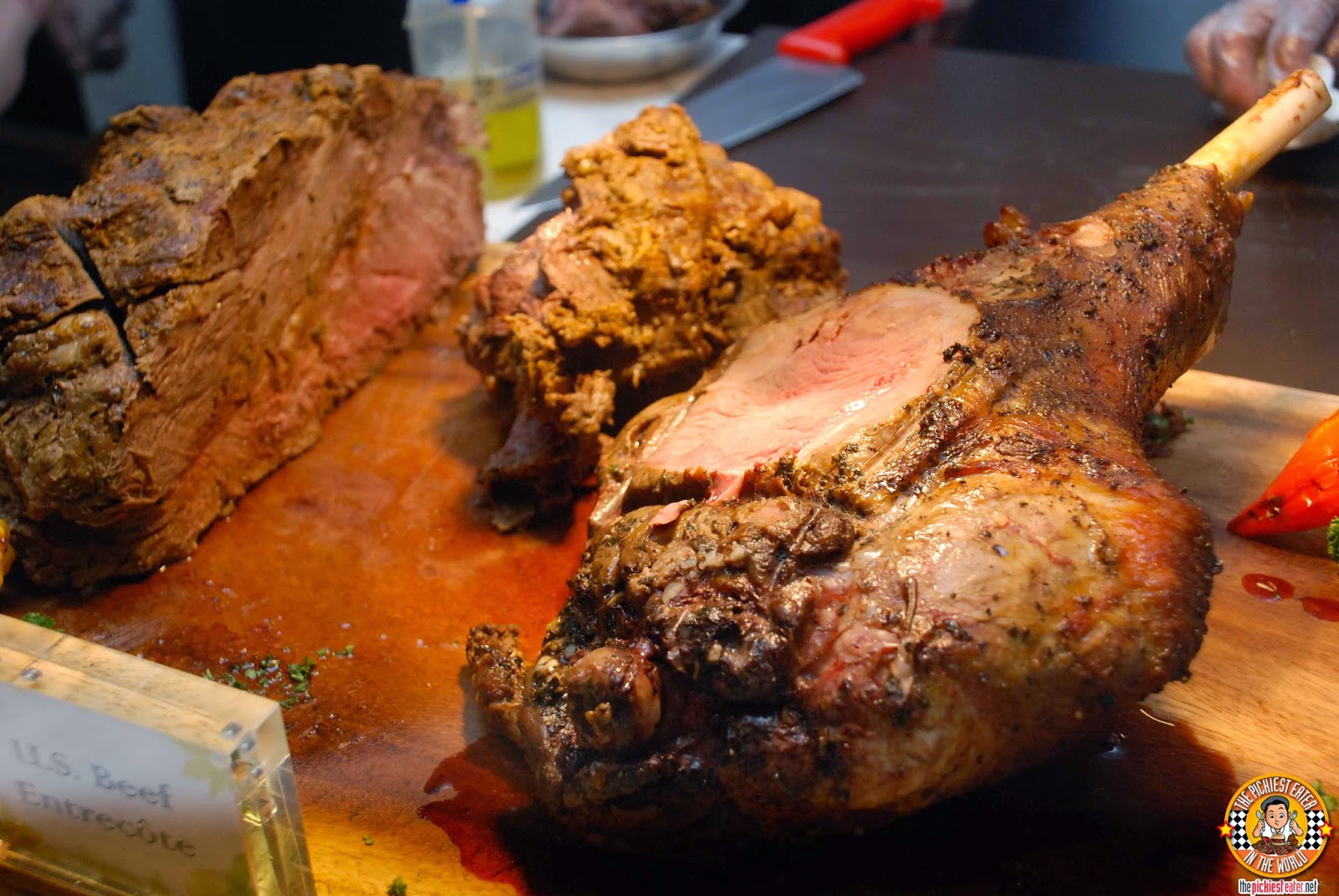 I had my heart set on the Spit-Herb, leg of lamb. It had a great fragrance from the herbs that met the gentle gaminess of the lamb and was later complimented by the mint jelly. 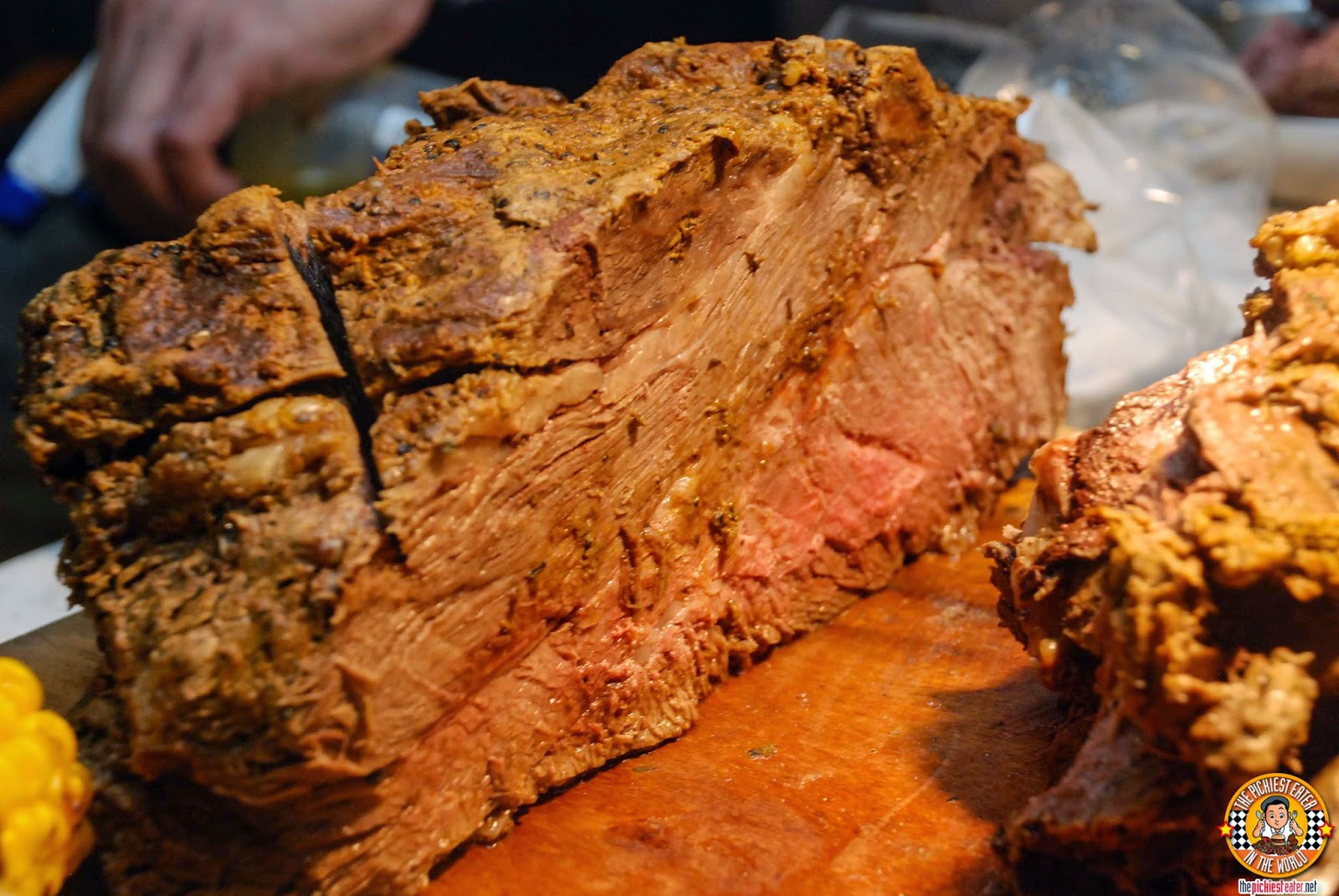 A Slab of Beef Entrecote was also available, but I found to be a bit lacking in fat content for my liking, although I will concede that the meat was incredibly moist, nonetheless. 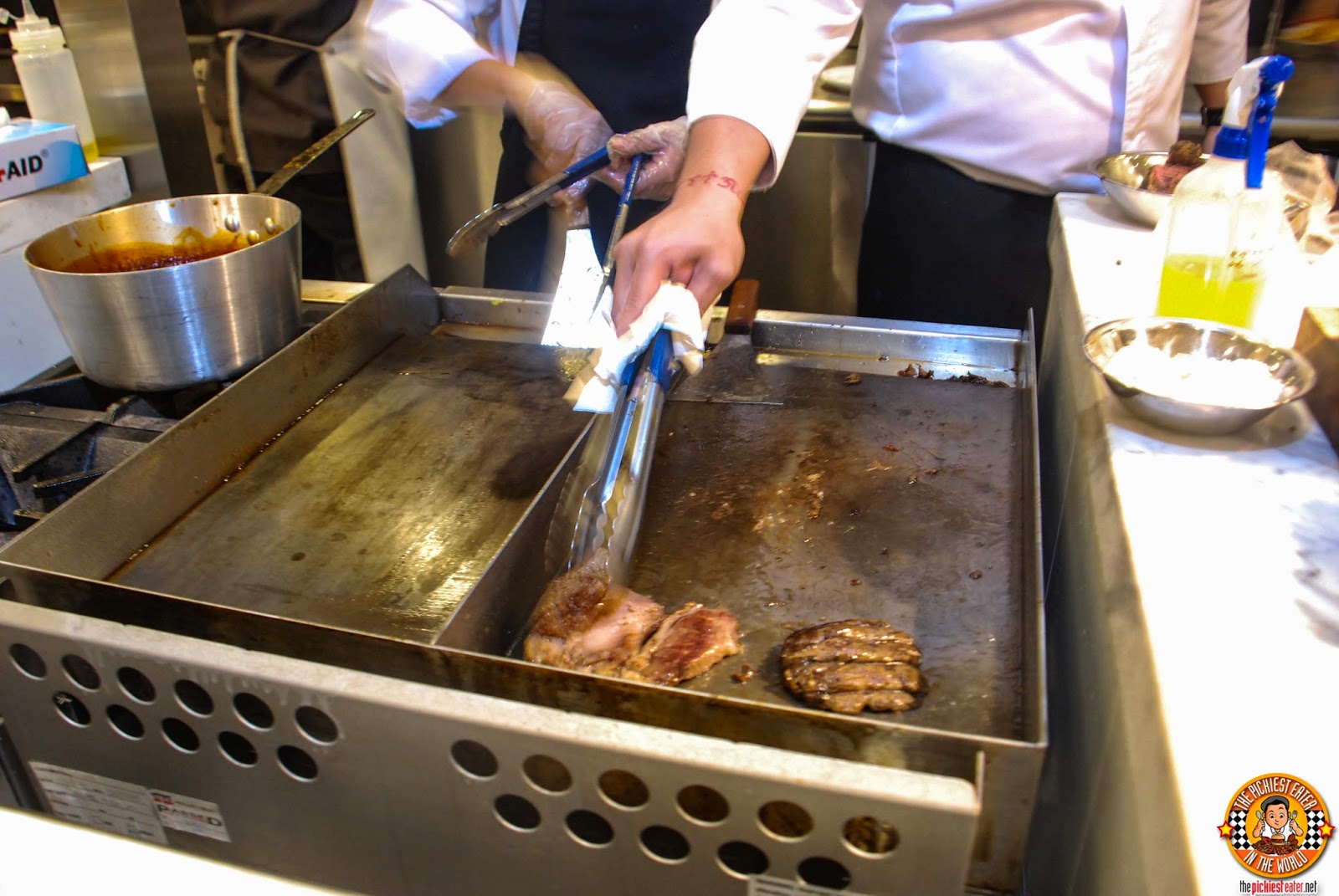 The slabs of meat are served Medium Rare, but you may request for the meat to be cooked to your desired temperature while you wait. 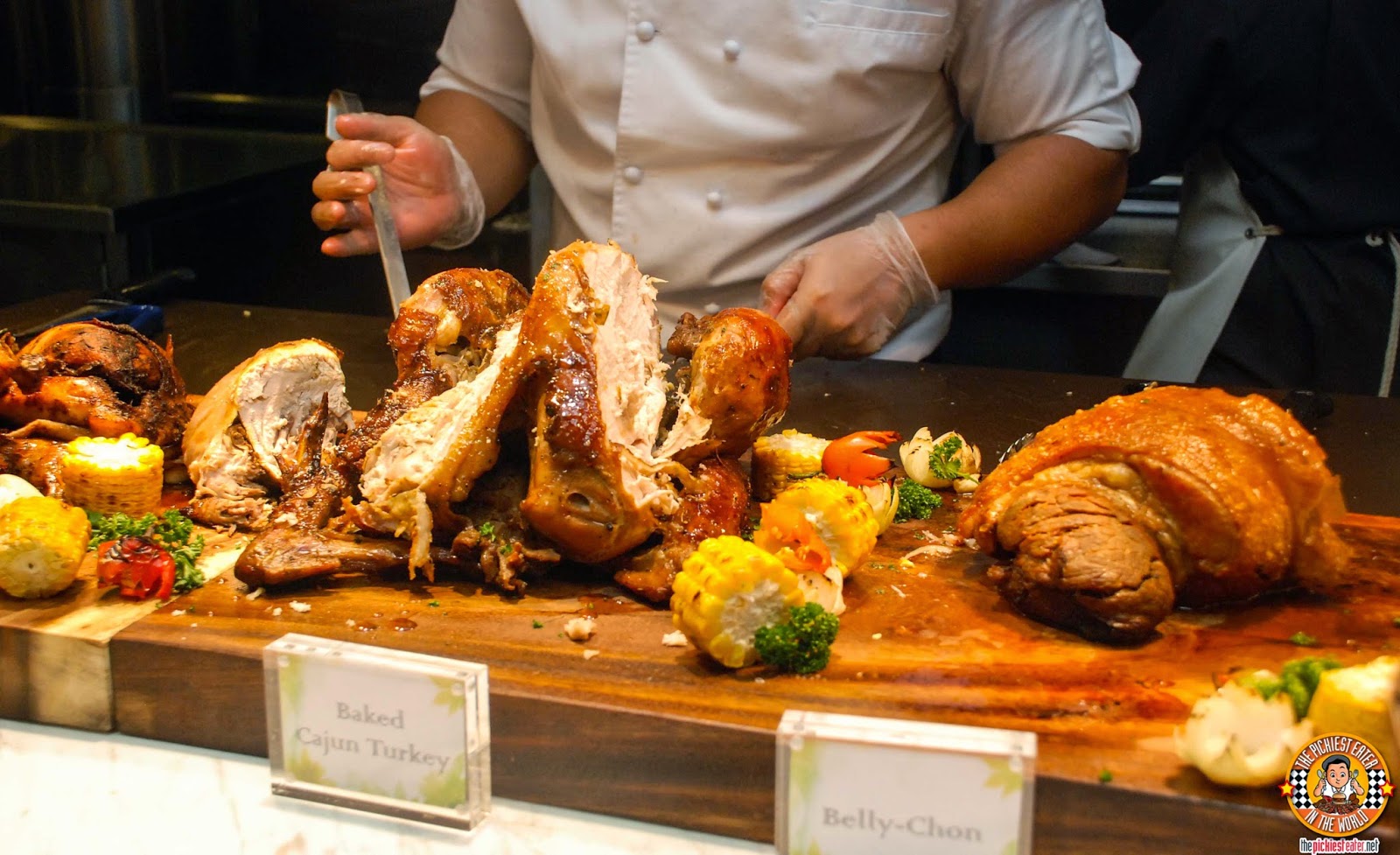 Other notable items on the carving station was the Baked Cajun Turkey that offered a distinct spiciness that melded into the meat, and the popular Belly-Chon, that had an amazing crunchiness, but revealed tender meat and mouthwatering fat. 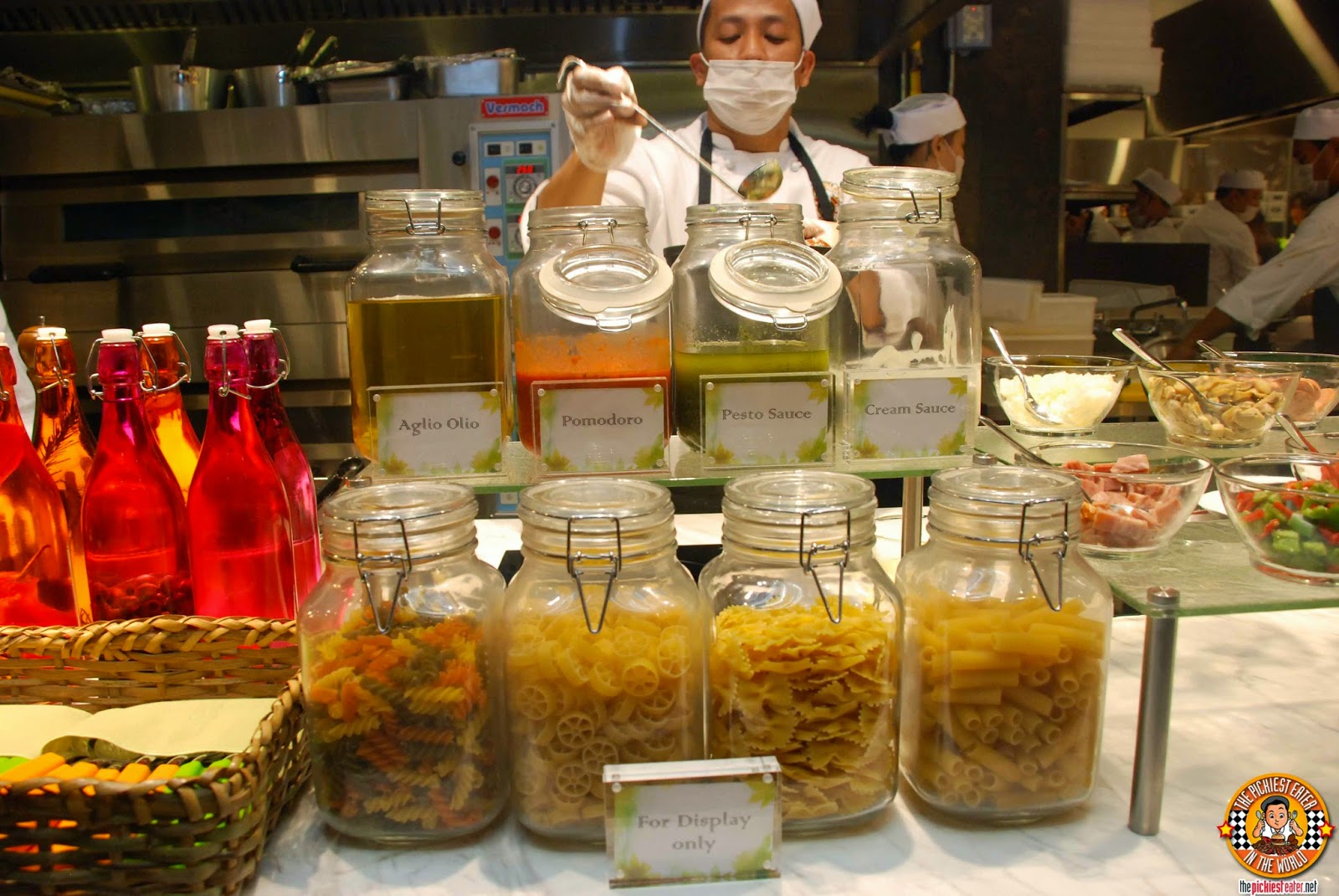 Like Vikings Megamall, there is a Wide selection to choose from in the Pasta Station and assorted ingredients to make your own Shabu-Shabu hot pot. 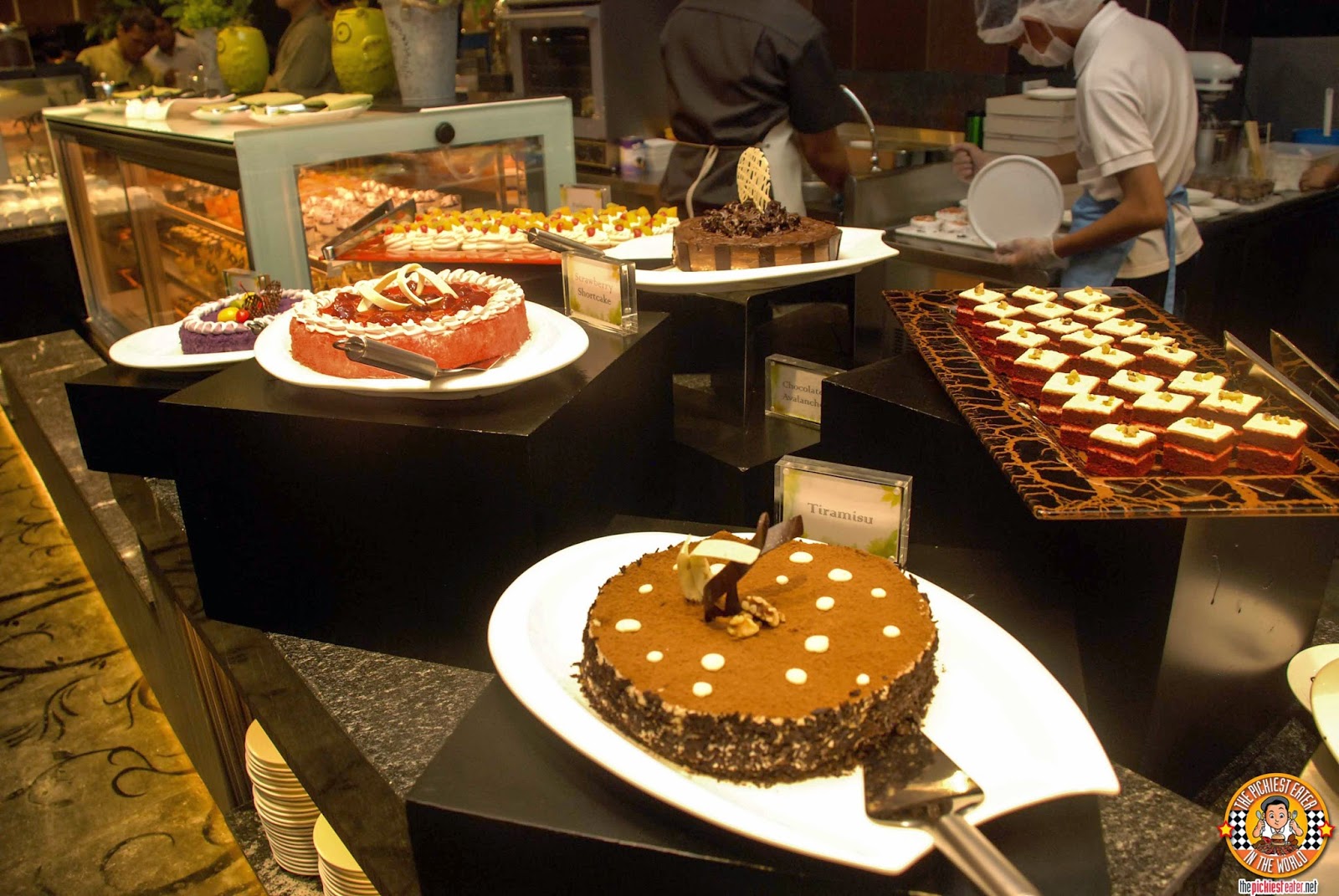 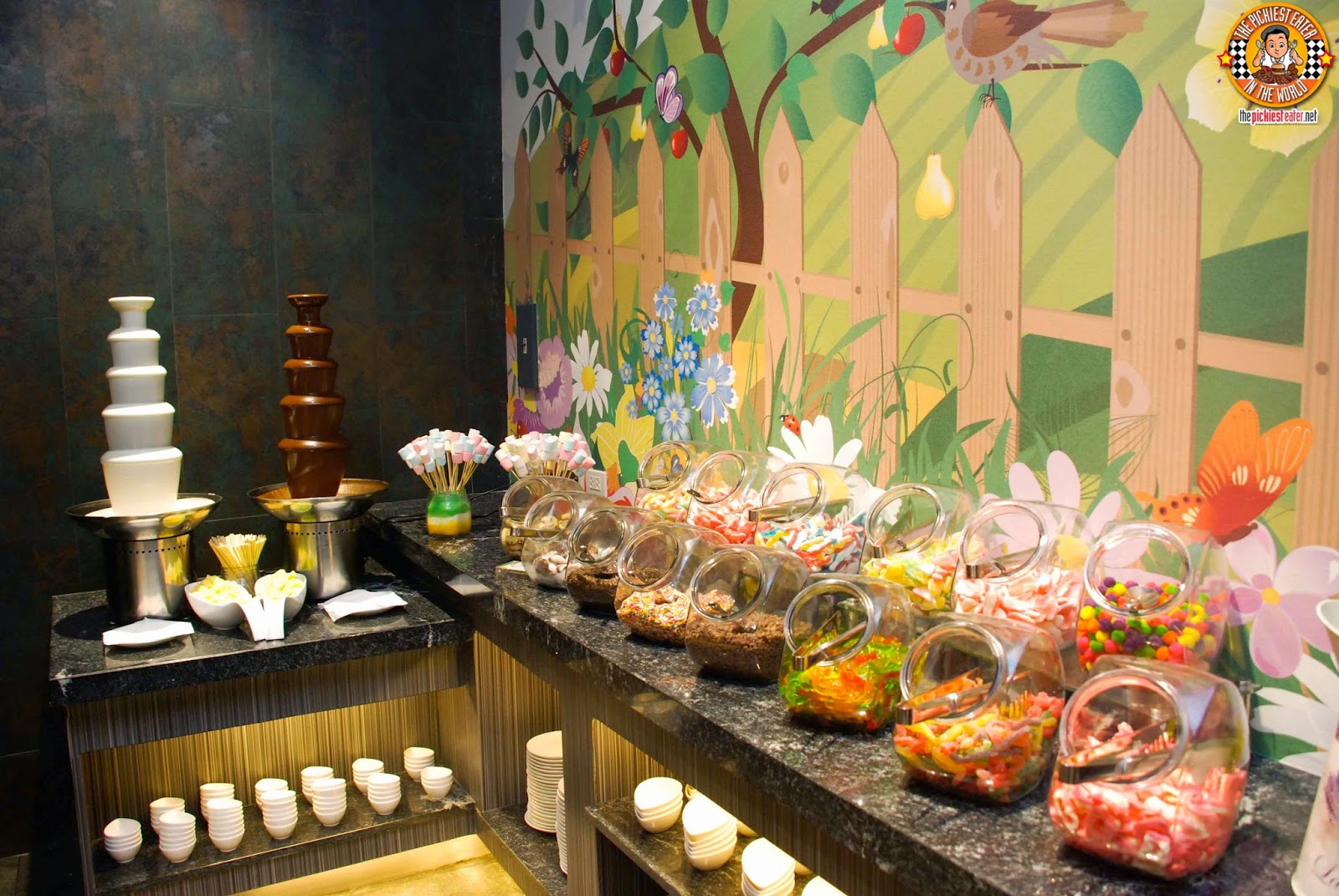 There was a wide array of desserts to choose from, ranging from different cakes and pastries, Gummy worms, Crepes, and Ice cream! 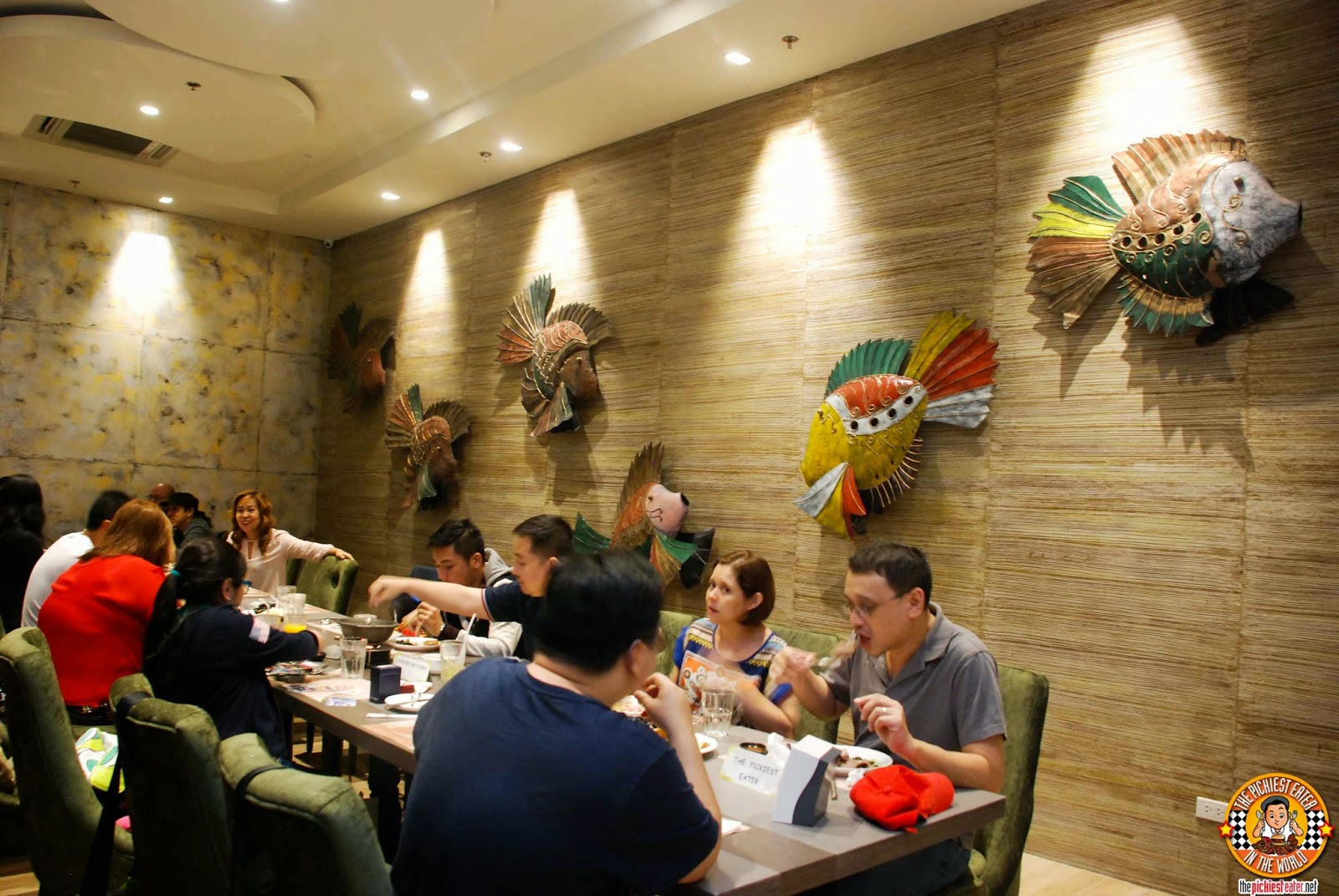 My blogger friends and I were situated in Viking's Function room, which could comfortably sit around 20 people. 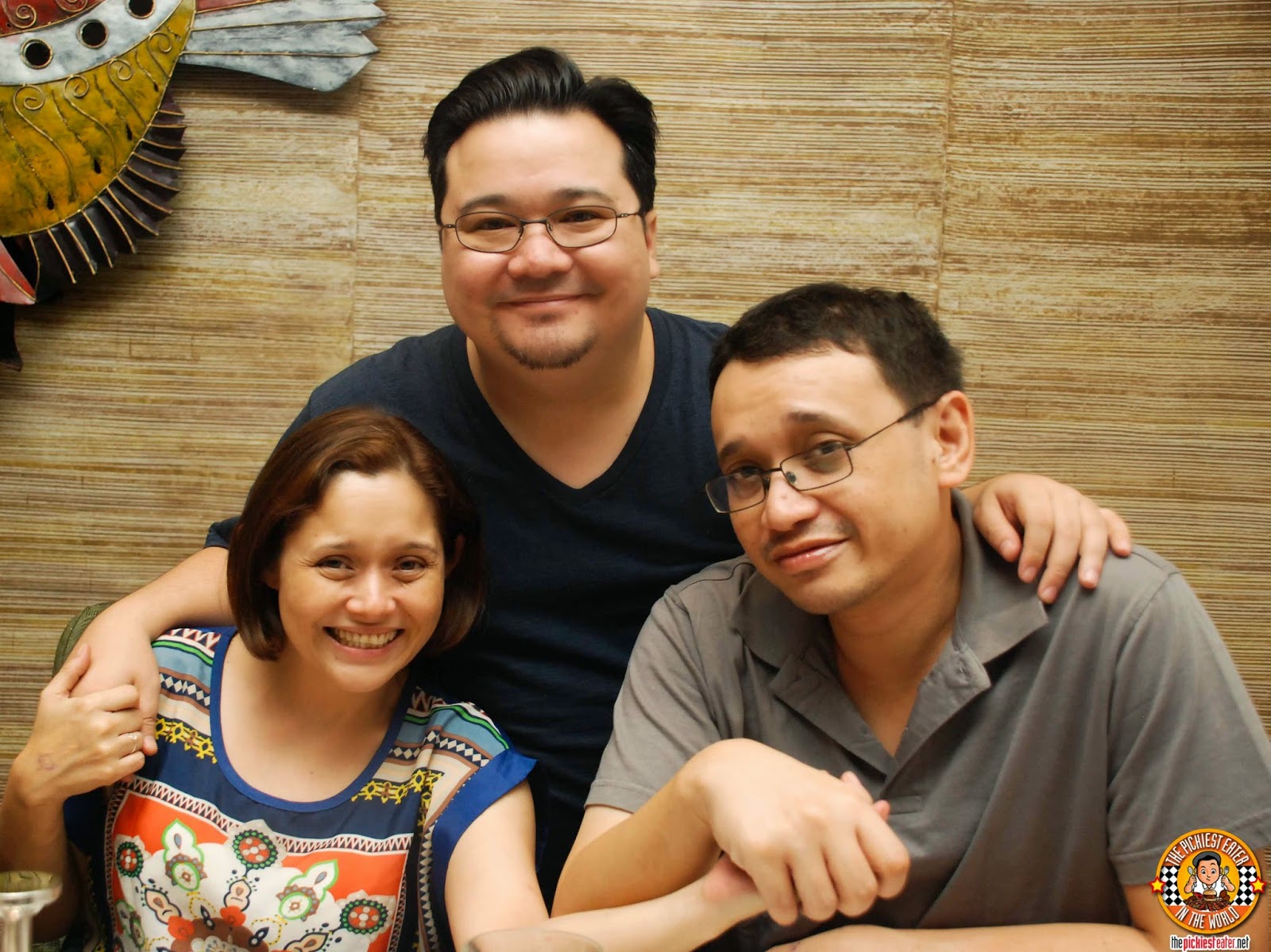 It was nice that my sister Raquel, together with her husband Julio, were able to join me for the first time in a blogger event! She was able to witness firsthand that there are indeed more matakaw people than me in this world! 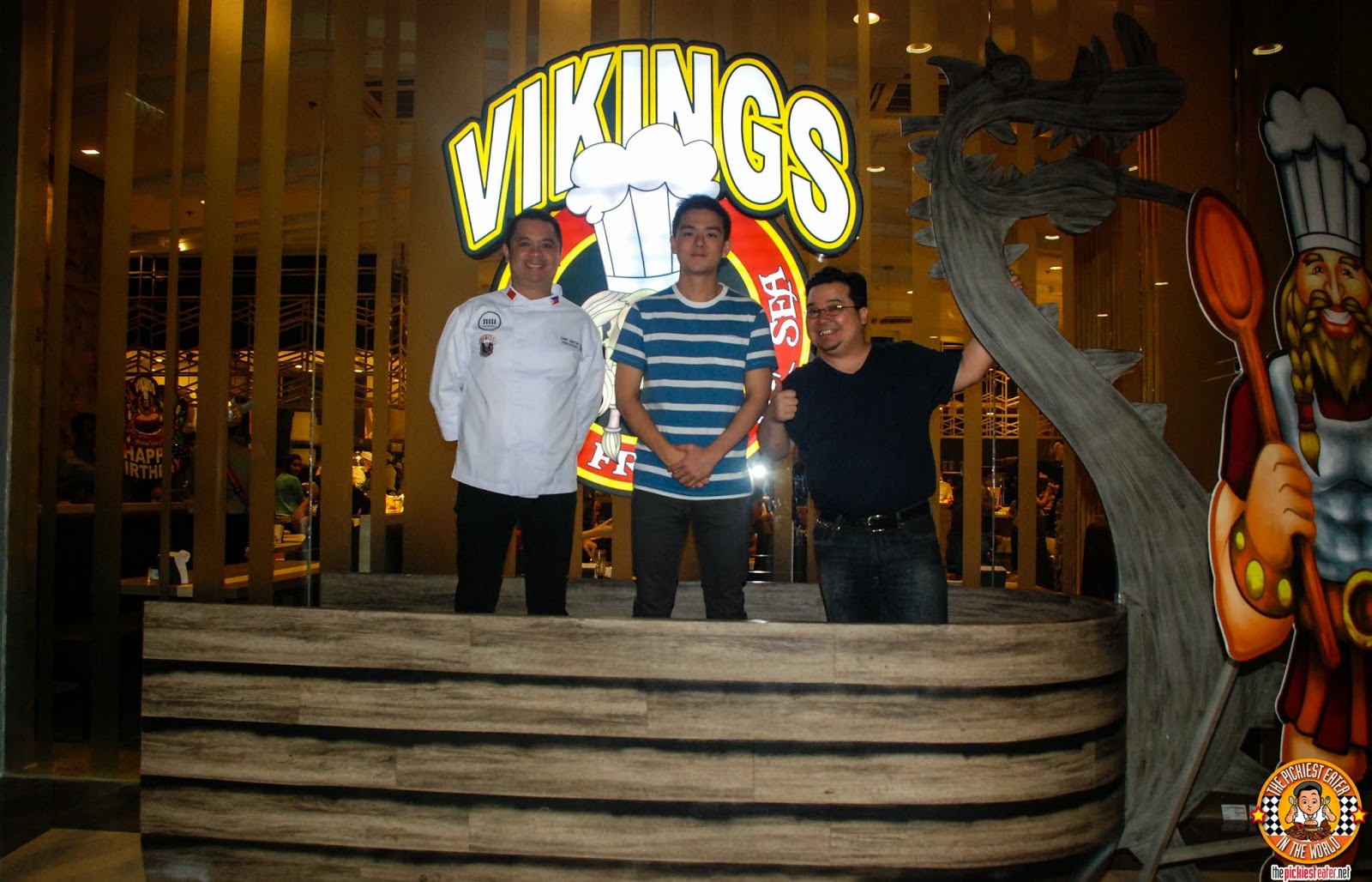 Congratulations to Charles, Raquel, Chef Anton, and the entire Vikings SM B.F. team for a very successful opening! Looking forward to seeing the Vikings brand continue to grow and bring more happiness and joy through it's food to people around the country :) 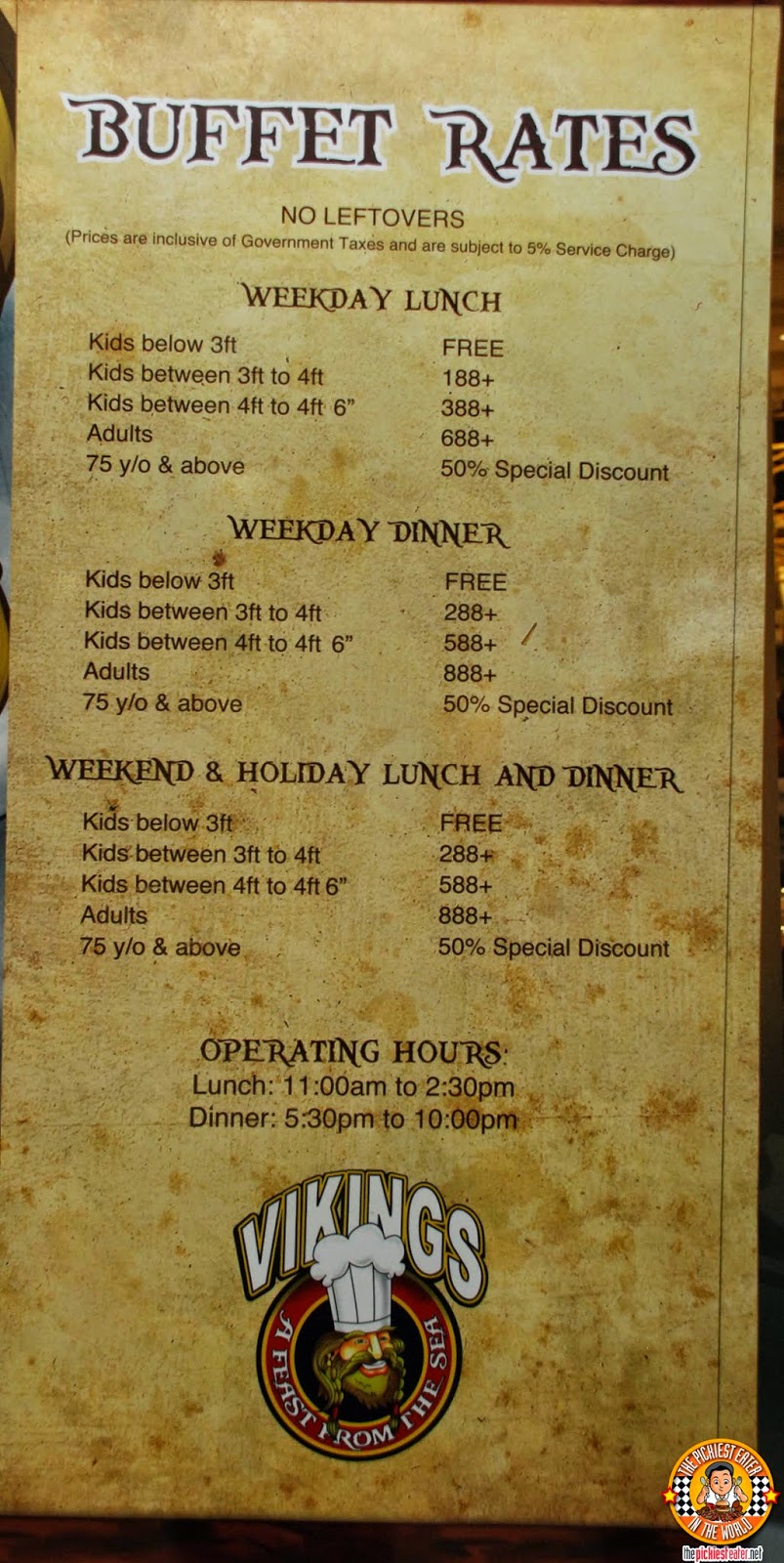 Email ThisBlogThis!Share to TwitterShare to FacebookShare to Pinterest
Labels: Buffet Restaurants, Vikings Buffet Rates, VIkings Luxury Buffet, Where to Eat in SM BF, Where to in Paranque