MAKING NEW MEMORIES AT THE NOSTALGIA DINING LOUNGE IN OAKWOOD 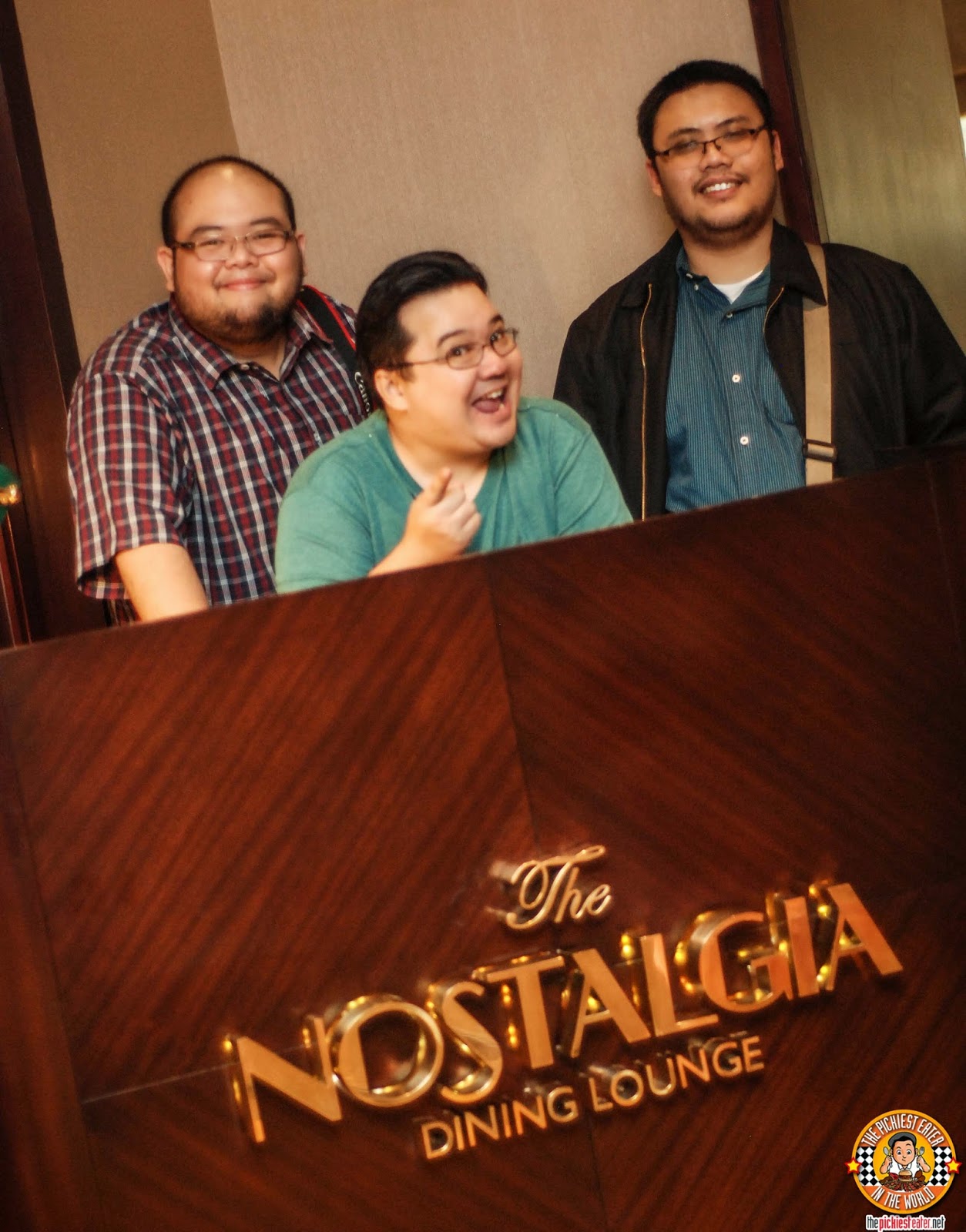 It was only last year that I was introduced to awesomeness that is Oakwood Premier Hotel. I never really considered Oakwood as one of the elite hotels here in the metro, but my eyes were opened during my very first visit there.

I wasn't able to attend that first event, so Rina went and covered it on her own. I really wasn't expecting to hear much but she was texting me all throughout the event telling me how badly she was wishing I could have joined her because I would surely love their food!

And she was right.

Since then, I've dined at Oakwood's Oakroom at least three other times, trying their Tex-Mex themed Buffet and their Jazzy Sunday Brunch. Also, one of the highlights of my year was when my family and I enjoyed an amazing staycation at Oakwood.

I will admit to feeling a tinge of sadness when I was informed that Oakroom would be closing its doors, to make way for a new concept. I may have only a few memories there, but they are ones that I cherish dearly.

Enter the year 2015, and Oakroom has reopened as Nostalgia Dining Lounge, ushering a new era of culinary excellence that I now closely associate with the Oakwood brand.


Nostalgia's menu basically consists of Oakroom's greatest hits of the past five years, with Executive Chef Jerome Cartailler planning to add some of his favorite dishes as seasons pass. 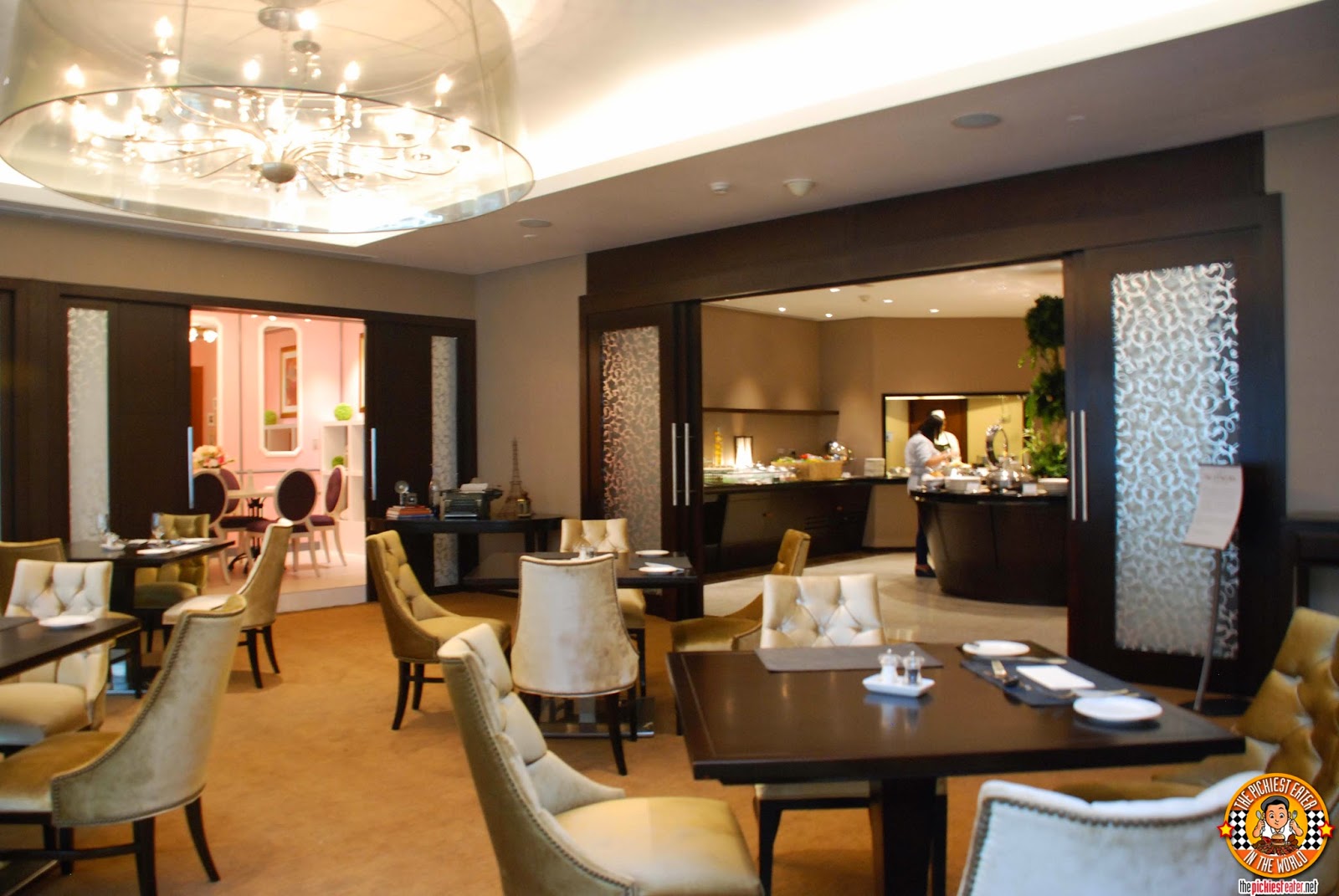 Though you may notice a few minor changes here and there in the main dining area, Nostalgia basically maintains the touch of elegance that Oakroom successfully invoked. 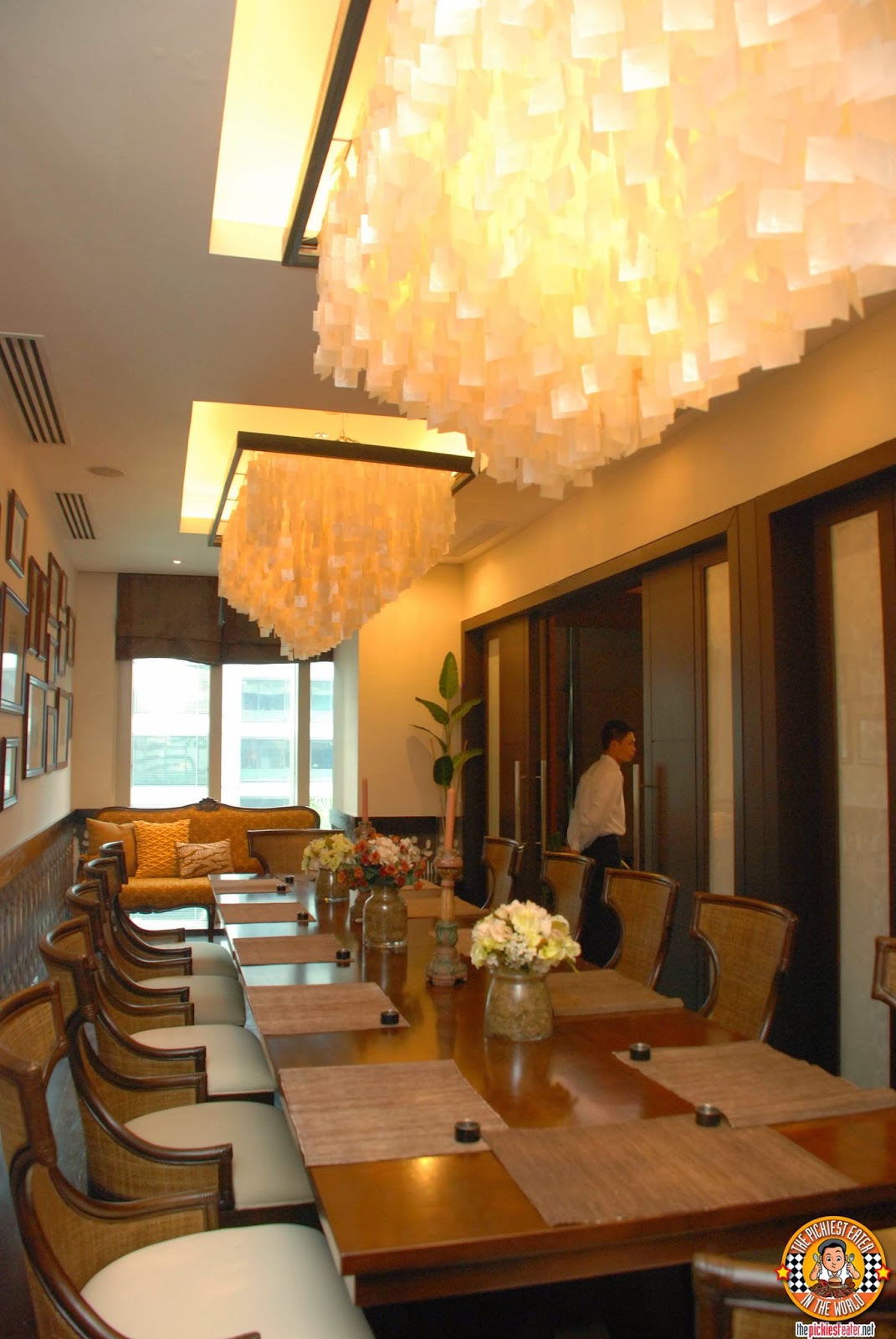 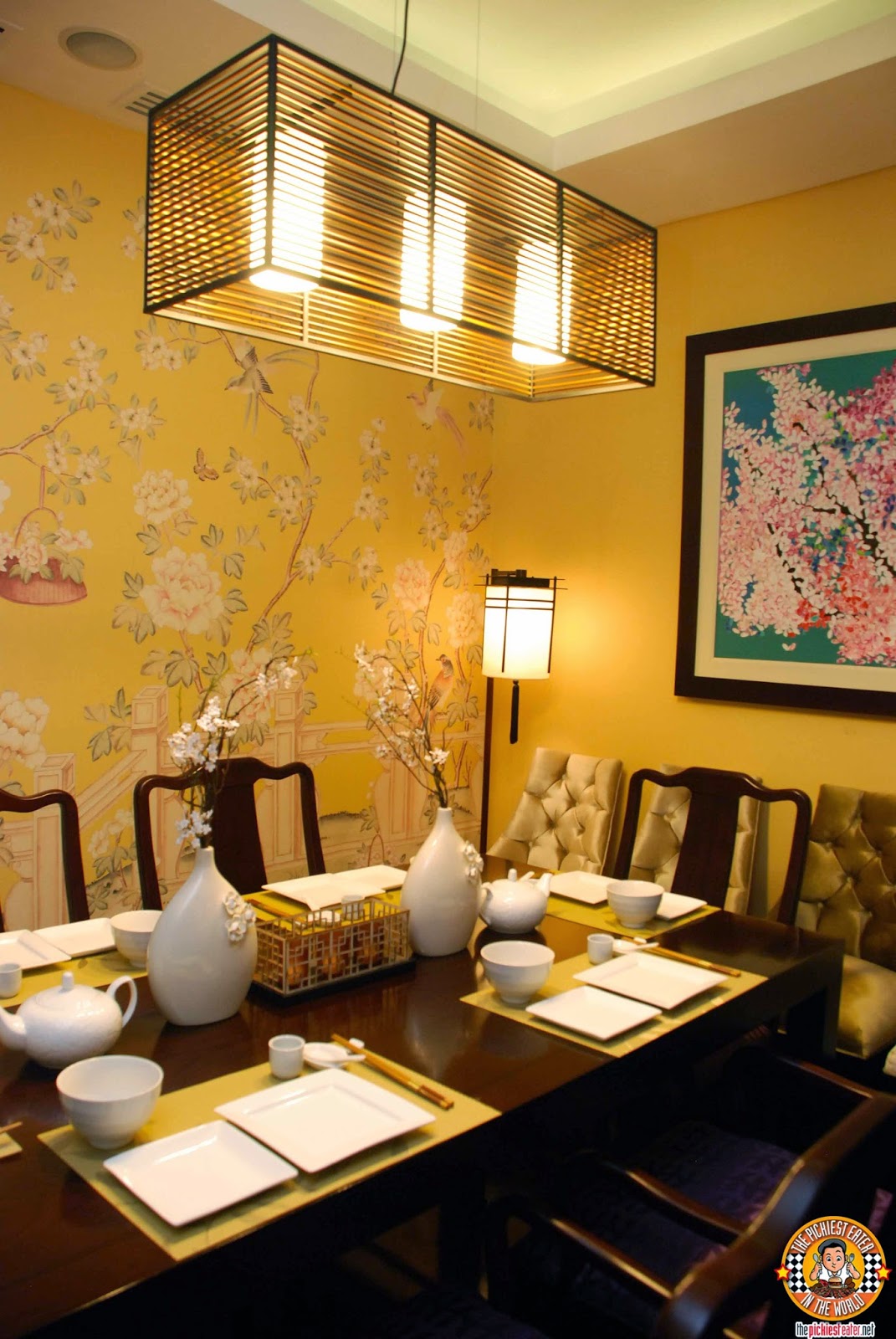 Beautiful function rooms called  that are perfect for private dinners, meetings and the like!

After looking around and feeling right home as I once did at Oakroom, Rina and I settled in to try some of Nostalgia's dishes. 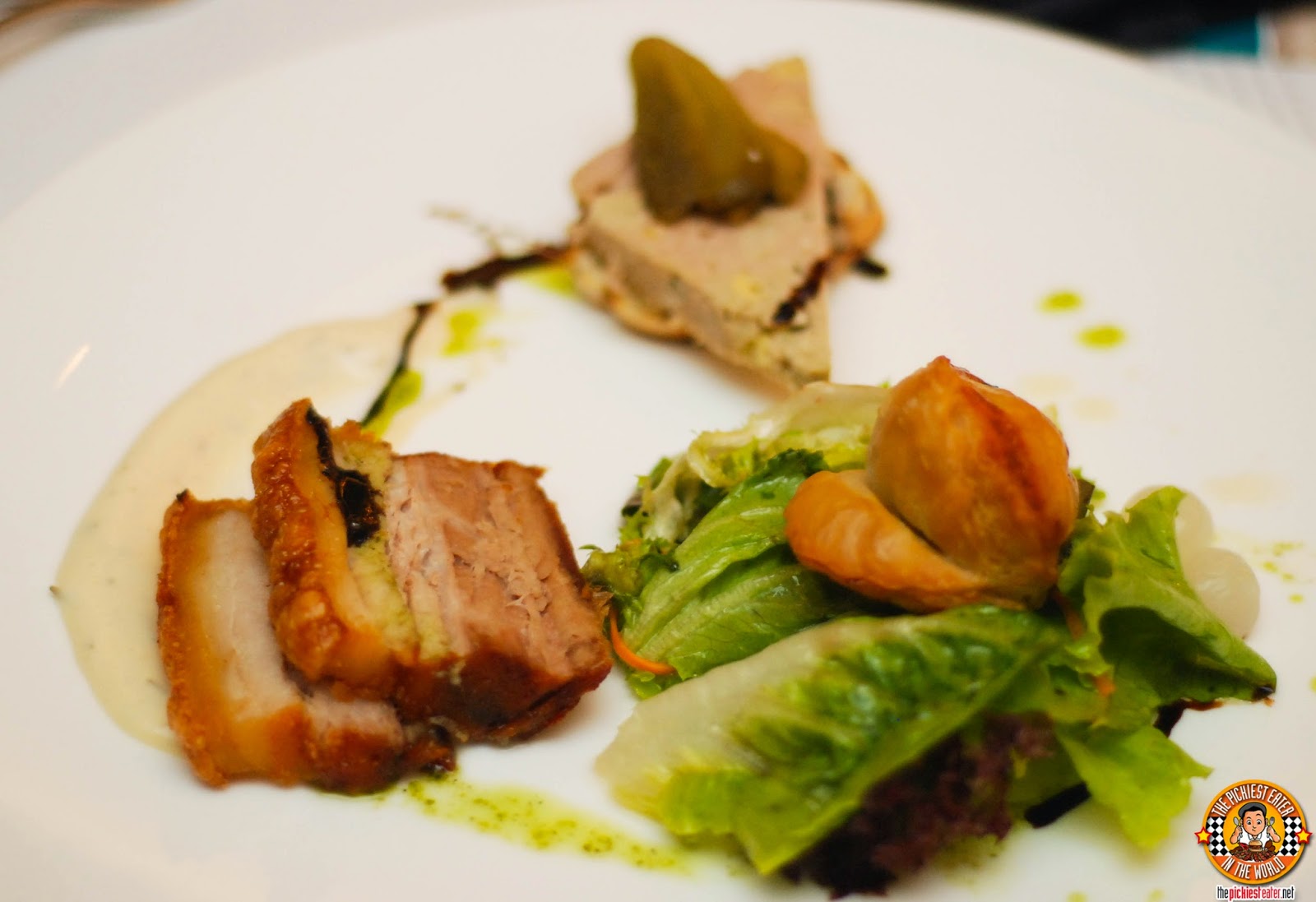 To kick off the meal, Nostalgia brought out a Trio of Appetizers. To the surprise of no one, it was the Crispy Pork Belly that immediately caught my eye. The thin slice of pork was cooked wonderfully, with the meat still tender but the lining of skin letting out a nice crunch. The meatiness melds perfectly with the special ranch dressing in which the slices lay on.

As much as I wanted to try the Escargot in Puff Pastry, I couldn't possibly call myself "The Pickiest Eater in The World" and willingly eat Mollusks, right? But tried it and absolutely loved it, even going as far as asking for my portion. She was kind enough to leave me a bit of the perfectly buttery and flakey puff pastry.

Although I normally stay away from Terrine because I get worried it might have liver in it, Rina encouraged me to try even just a little piece, which I eventually did. I was pleasantly surprised that it was actually rather tasty. 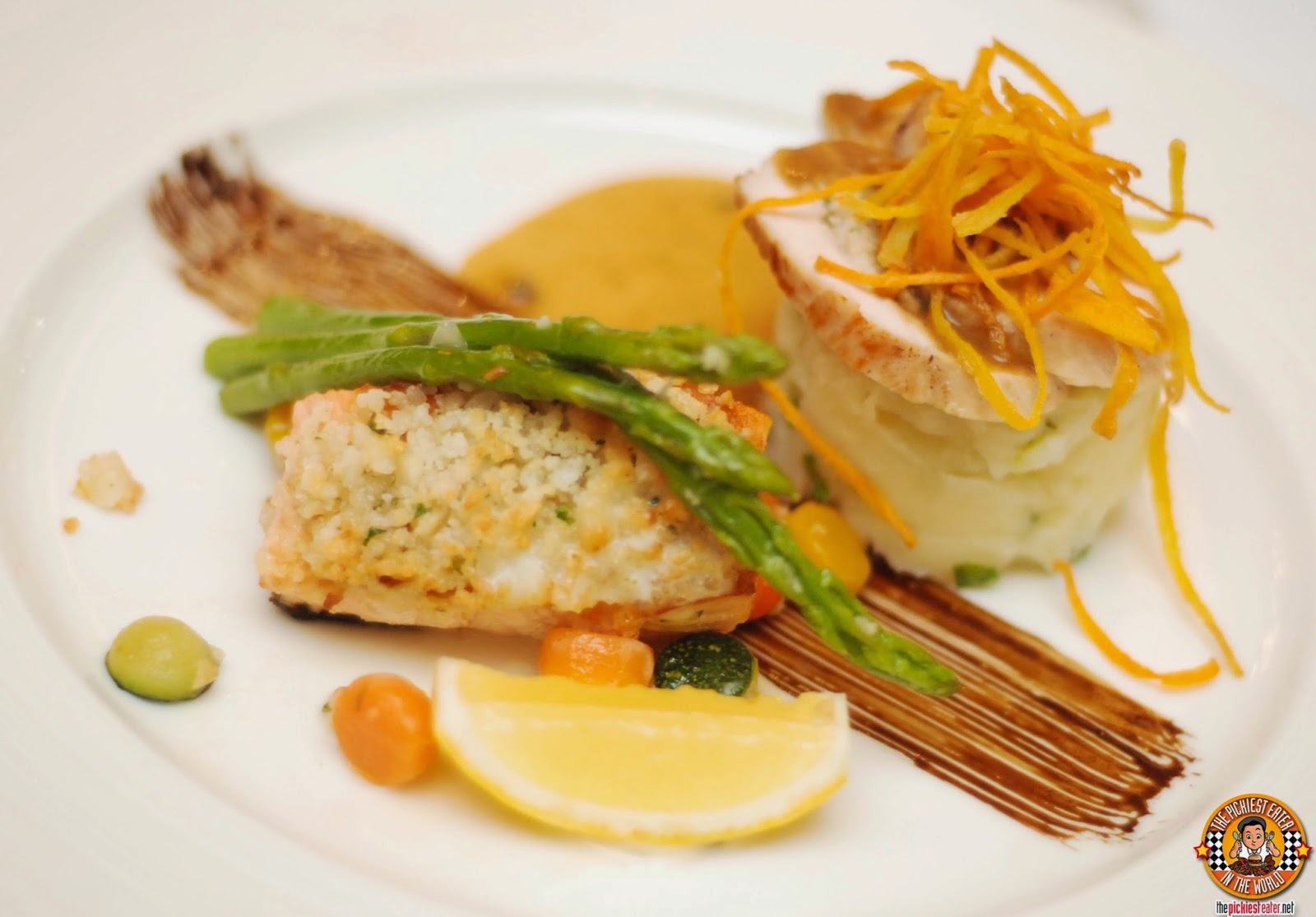 For our entrees, we were served a sampler of platter of two of Nostalgia's speciality dishes.

The first dish I tried was the Chicken Supreme with Mushroom Mousse. Immaculately cooked chicken breasts stuffed with with a creamy mushroom mousse and a drizzling of a flavorful Gorgonzola sauce.

Next, we tried the Macadamia Crusted Salmon Fillet with Mini Vegetables and Chardonnay Sauce. I really loved the cook on the salmon, which had a meatiness to it that made you forget you were eating fish. The macadamia topping gave the fish an added dimension of texture while the Chardonnay sauce further complimented the flavors. 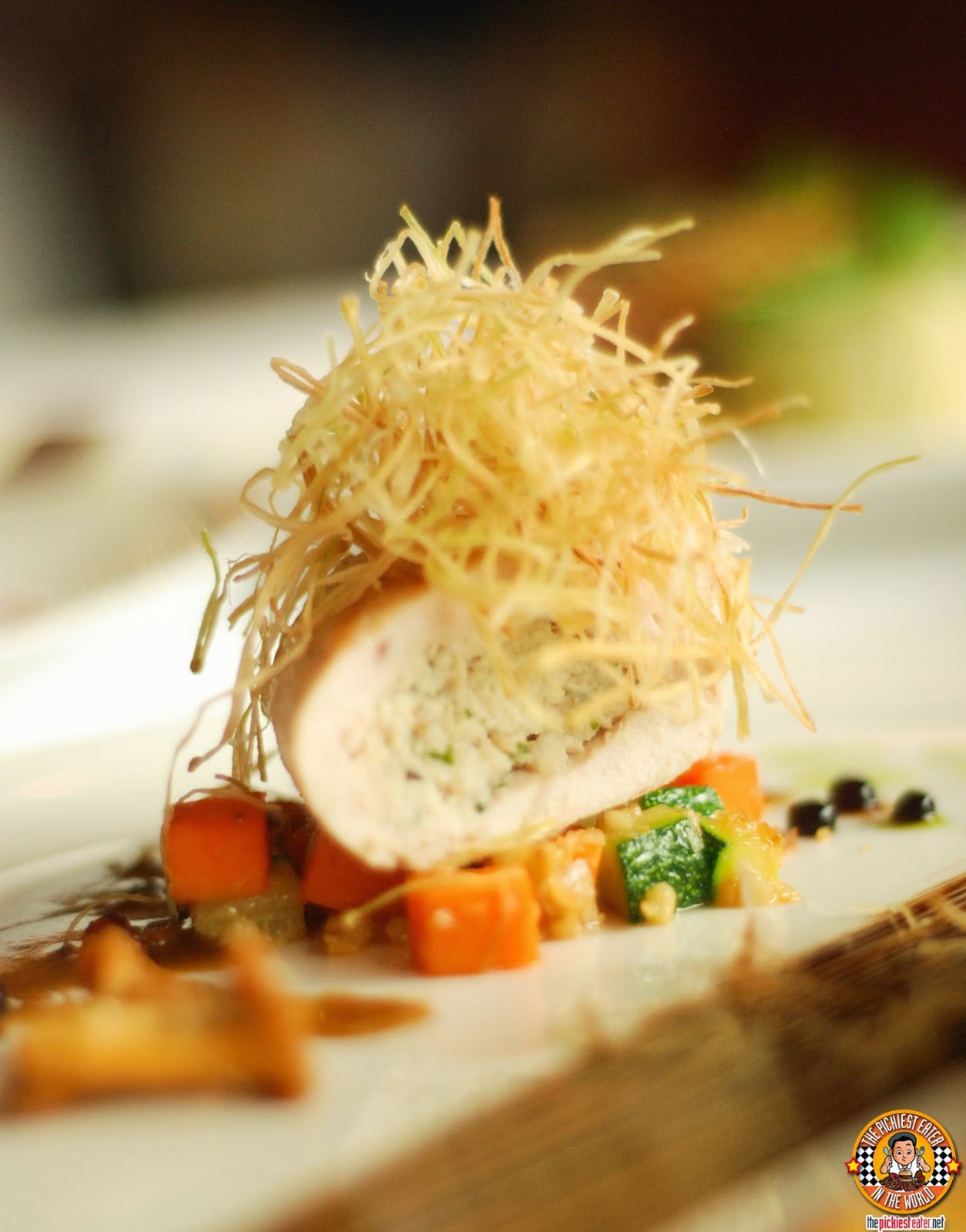 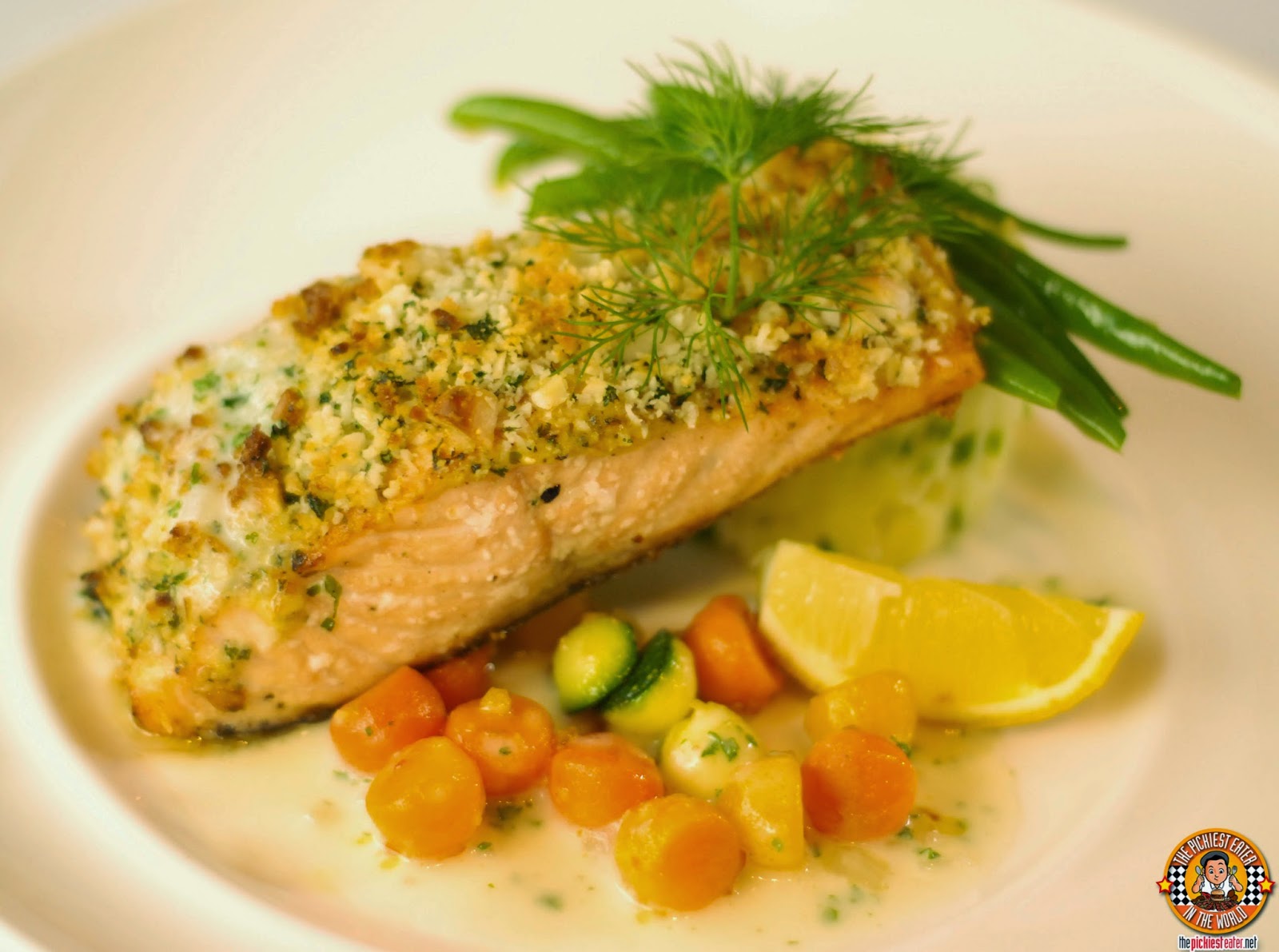 Other Dishes in Nostalgia Menu 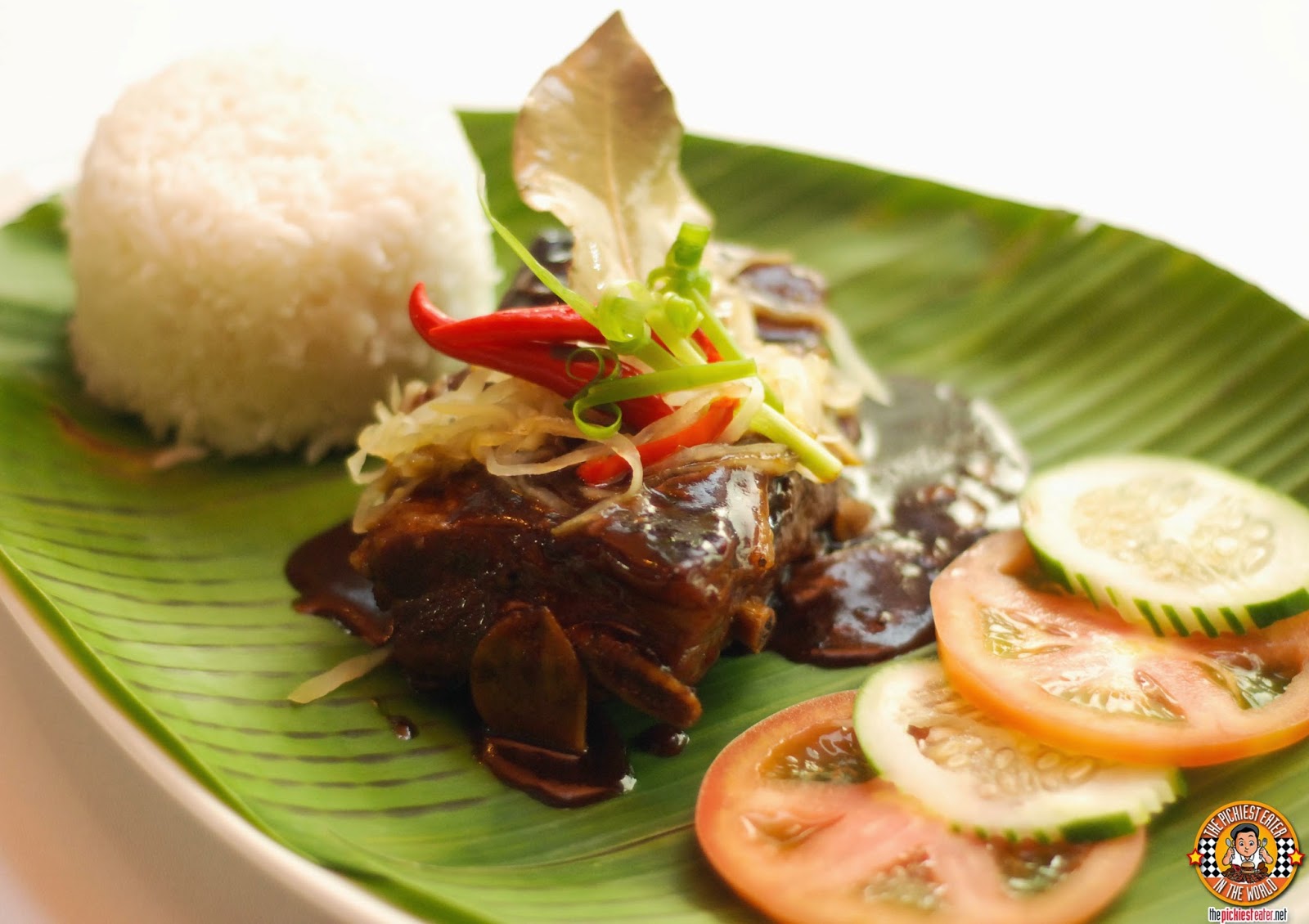 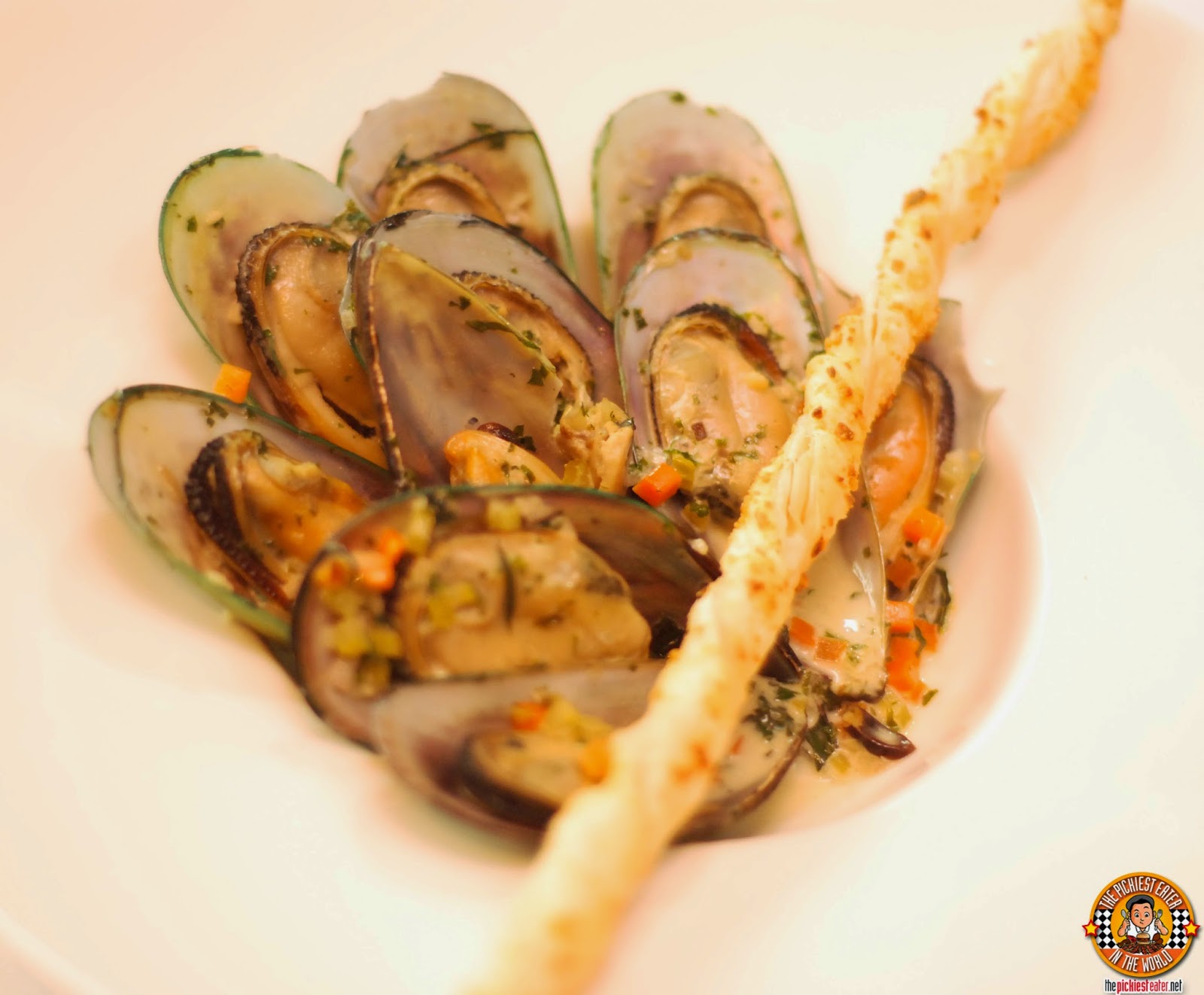 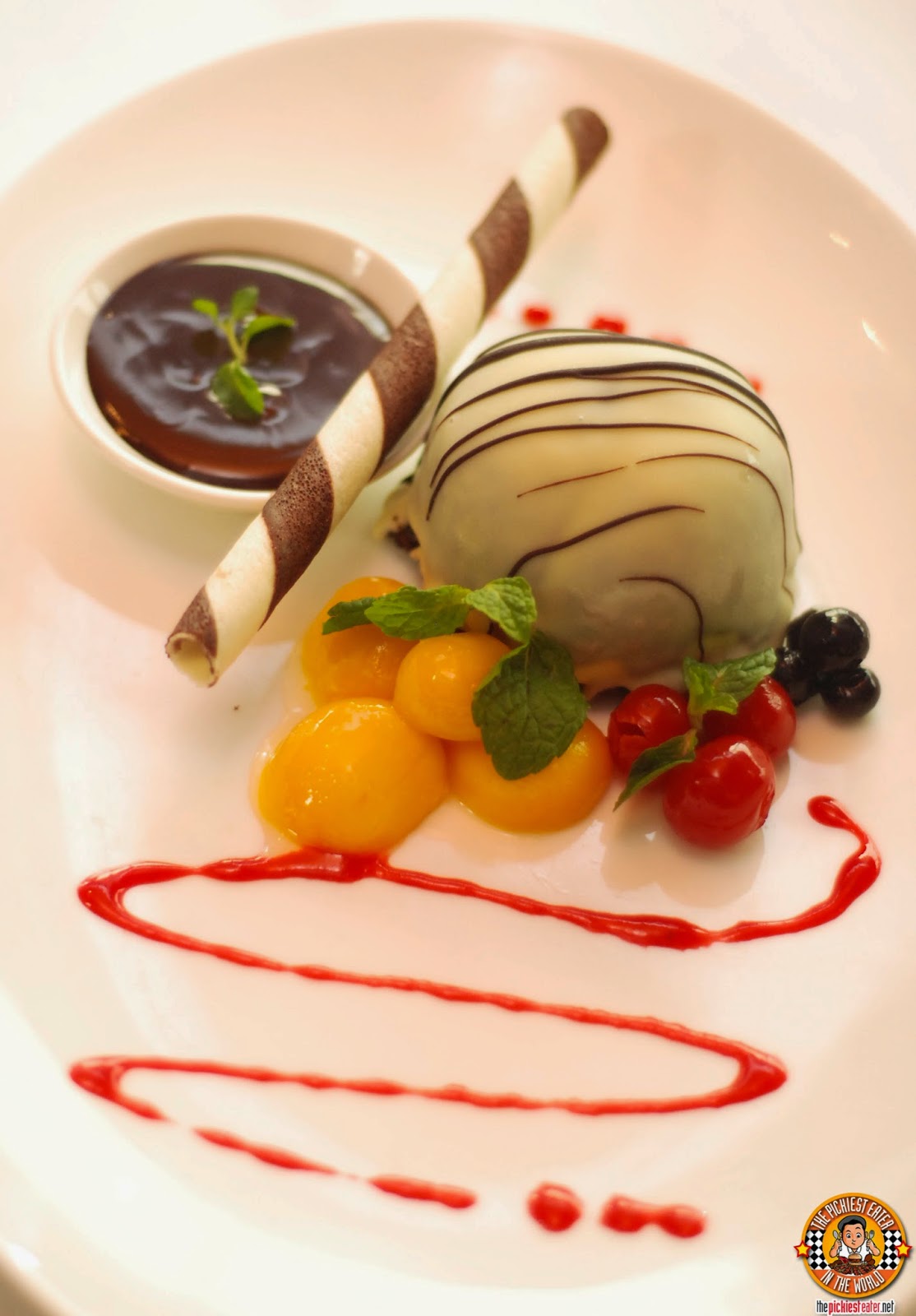 To cap off our phenomenal meal, Nostalgia prepared their take on the classic Italian Tartufo. A coffee infused Mousse, encased within a chocolate ganache, with drizzlings of a berry coulis and fruits giving more contrasting flavors. 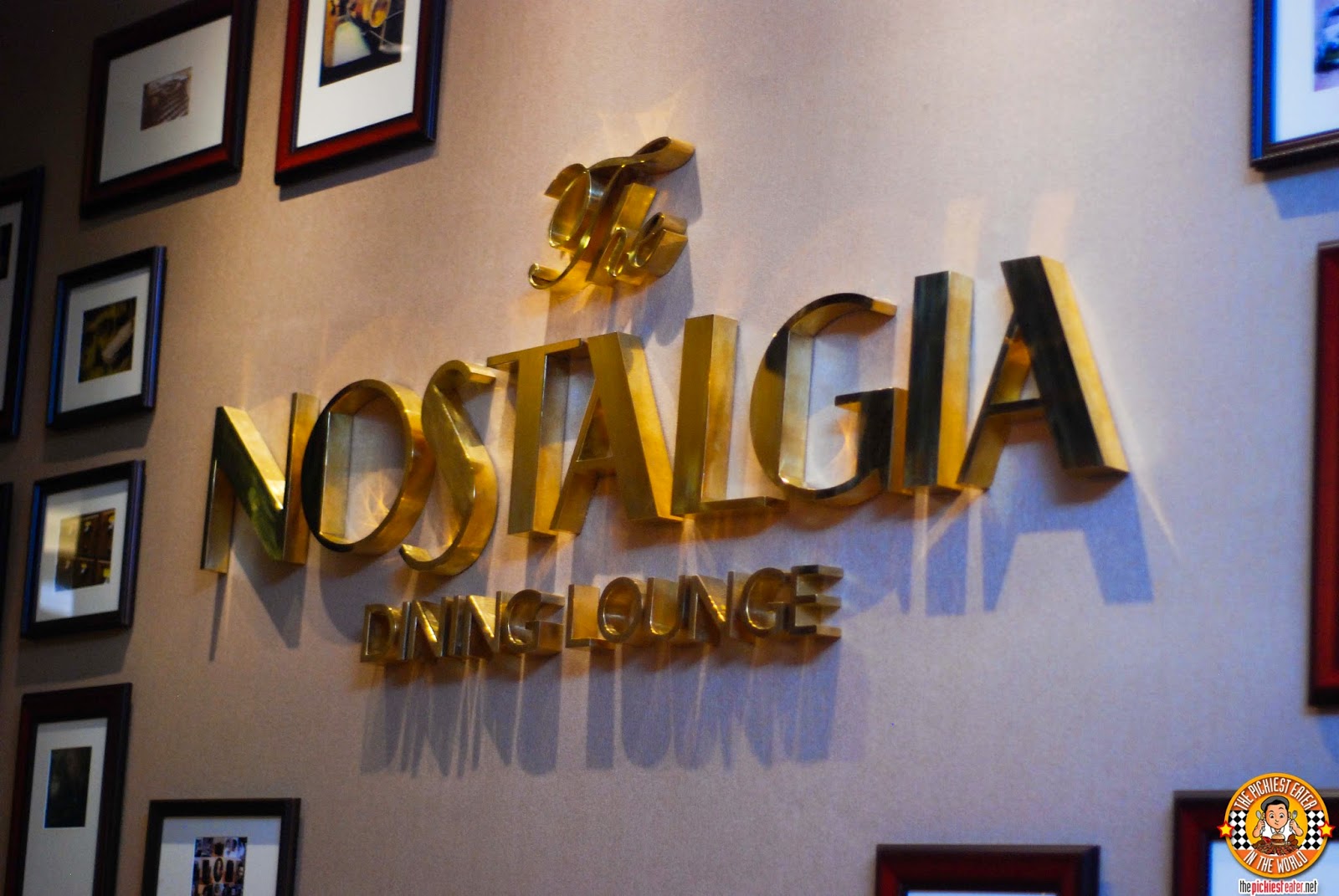 As the popular song goes, "Every new beginning comes from some other beginnings' end". Rising high above the ashes of Oakroom, Nostalgia Dining Lounge looks to continue to uphold the high standard of service and quality of food that it's predecessor was known for.

I am truly excited to create some new (food) memories with my family and friends at Nostalgia Dining Lounge!

Email ThisBlogThis!Share to TwitterShare to FacebookShare to Pinterest
Labels: Hotels in Ortigas, Nostalgia Dining Lounge, oakwood buffet, oakwood premier manila, Restaurants in Ortigas, where to eat in ortigas, Where to Stay in Ortigas